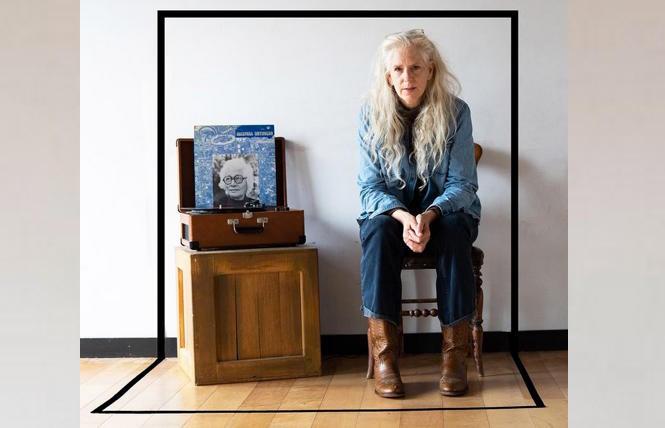 Beth Wilmurt in 'The Cassandra Sessions: Recording This World'

When Berkeley-born folk singer and activist Malvina Reynolds —the inspiration for Shotgun Players' The Cassandra Sessions: Recording This World— wrote her charmingly barbed "Little Boxes" back in 1961, she wasn't thinking about shiny wrapped packages like the ones currently piling up under trees throughout the Bay Area.

The song, which condescendingly sniffed at the homogenous tastes and aspirations of mid-century America's booming middle class, was referring to Daly City's planned sprawl of cookie-cut houses, then on the rise (and presently shivering beneath its annual blanket of blinking lights and candy cane kitsch).

No doubt Reynolds had a limited tolerance for consumerist Christmas traditions. She'd probably agree that the most precious gifts come in shared experiences, not little boxes. If that's in keeping with your own holiday spirit this year, skip the ticky-tack and spring for tickets to The Cassandra Sessions, a singularly engrossing presentation of Reynolds' music created by Beth Wilmurt with Jake Rodriguez at Shotgun Players in Berkeley.

The production is more concert than play, but as concerts go, its compellingly theatrical: Not Madonna theatrical; Laurie Anderson theatrical. It hums with static electricity and understated intelligence.

For most of the show's 80 minutes, Wilmurt performs Reynolds' songs from behind the glass of a tiny, illuminated recording studio at the center of an otherwise darkened stage. With her rangy physique and cascade of silver hair that suggest Edgar Winter by way of Giacometti, she quietly commands attention, then clearly expresses anxiety, dismay, playfulness and ultimately, hope with the slightest crook of her mouth or hesitant hover of fingers above the keyboard.

Her coolly magnetic visual presence is amplified by the shifting color fields of Ray Oppenheimer's elegant, emotive lighting: With a twilit blue slanting against the recording booth window, Wilmurt becomes the lonely woman of a Hopper painting; from within a rectangle of red, her songs evoke an eternal, meditative Rothko state.

Wilmurt's bell-clear, unshowy vocal performance is well-suited to Reynolds' sly, plainspoken lyrics, which rail against pollution, economic injustice and sexism over simple, irresistibly repetitive rhythms that stick in the mind like nursery rhymes. There's an oddly pleasant monotony to Reynolds' compositions; the toe-tapping campfire virality which made them easy to sing along to in the 1960s becomes a gripping hypnotic effect in this theatrical setting.

At one point, co-creator Jake Rodriguez's ingenious sound design enables Wilmurt to record multiple vocal tracks on stage, then effectively perform with herself. And toward evening's end, in an echo of Talking Heads' Stop Making Sense, the audience watches the recording booth be disassembled onstage as Wilmurt engages her audience directly, urging them to sing with her. We feel the joy in repetition, the potential for ideas to proliferate.

Fair warning: The smart, simple gifts of Cassandra (billed as a workshop production) come wrapped in an excess of twisted bows and glossy paper —in the form of artists' statements, press releases and program notes— that could easily lead a theatergoer to expect a more narrative show, with Wilmurt playing Cassandra, the disbelieved prophetess of Greek mythology. This may well have been Wilmurt and Rodriguez' original ambition as they initiated work on the piece, and it could continue to develop along those lines; for the moment though, it's not the thought that counts. 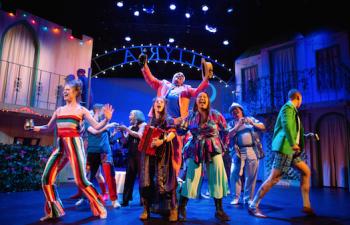 Food of love, play on
Local theater's other holiday fare worth noting is the gloriously goofy adaptation of Twelfth Night at the San Francisco Playhouse, directed by Susi Damilano. Shakespeare gets a respectfully playful shaking up in this lightning fast, candy-colored one-act musical spin on his gender-bending, snobbery-snubbing comedy of romantic errors, originally commissioned by the Delacorte Theater for New York's Shakespeare in the Park.

The lyrics, by Shaina Taub, sometimes ring oddly anachronistic against the abridged original dialogue ("X-ray vision?"), but her poppy melodies have a propulsive energy that aligns well with the story's mistaken-identity silliness. Carnival-colored scenery by Bill English and Heather Kenyon and glad rag costumes by Abra Berman add to the festive atmosphere.

This take-the-whole-family hit will keep a smile on your face from start to finish. It's guaranteed holiday cheer.