Mayor Pete: the coming out of American politics 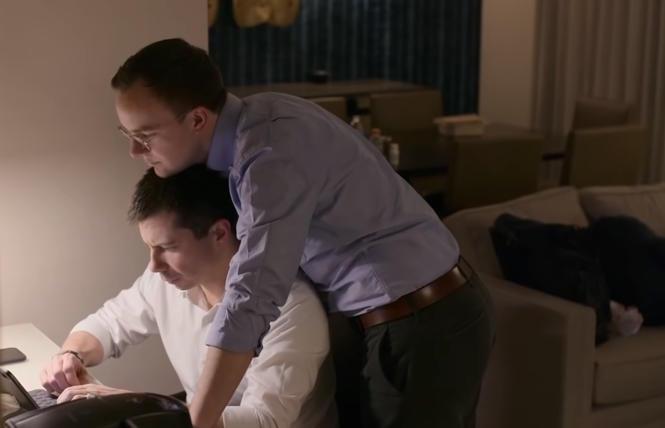 Pete and Chasten Buttigieg in the film 'Mayor Pete.'

Mayor Pete, a highly moving unveiling of everyone's favorite queer presidential candidate, debuts worldwide on Amazon on Nov. 12. This is the latest of the many offerings produced and/or directed by Jesse Moss, which include the acclaimed Boys State (2020), Gay Chorus Deep South (2019), Extreme Civil War Reenactors (2012), and Speedo (2003), which sadly is not about the bathing suit. 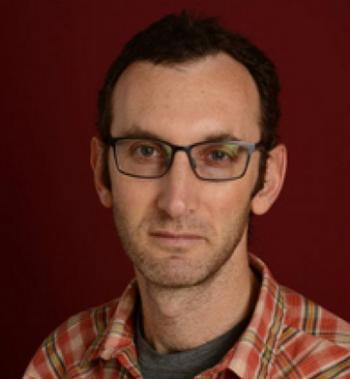 So why is Moss, a charming heterosexual, so gay-friendly? He was born in San Francisco, went to college here, and his father "who's an epidemiologist, was working at UCSF and SF General sort of at the beginning of the AIDS epidemic. So I sort of lived that experience with him, living part of my life in the Castro and part of my life with watching him in the AIDS world, and that was the backdrop of my life. I don't know what that means in terms of the choices I've made, but that's my life's reality."

Moss now lives here with his wife, two kids, and his Emmys, which —in our video-chat interview— were symmetrically placed on either side of him like Buckingham Palace guards.

"Is your designer queer? They did such a nice job with the awards," I asked as our virtual interview began.

"My designer is not gay, but she's great," Moss smiled. "You know my wife has been taking down the Emmys every time we do a Zoom, and I said, 'Just leave them there.' I'm obnoxious. You called me on that." 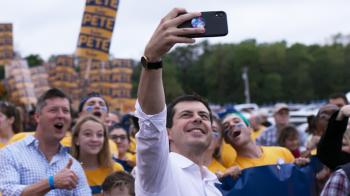 a scene from 'Mayor Pete'

"No. No. I love where they are," as I do Mayor Pete, a tale of Buttigieg's "failed" presidential campaign that starts a year before he eventually wins the Iowa caucus. Besides the expected up-close observations of all the politics involved, here is a startlingly detailed LGBTQ love story where there's much kissing, hand-holding and give-and-take chatter between Pete and Chasten, who, by the way, has written his own well-received book, I Have Something to Tell You.

That Moss agreed to do this documentary so early on, a year before Buttigieg won the Iowa caucus, was a gigantic gamble. Would the campaign last a month? Six months? Could an openly gay man gain any traction in the presidential race? Would Moss even wind up with enough material for a short film? The presence of Chasten convinced him there was.

"I wasn't sure when I started the project," Moss recalled, "how much of Pete's relationship with Chasten would be a part of the story. It seems naïve to say that now, but I was so focused on the political narrative: this young, gay, out mayor with this unusual backstory who was going to dip his toe into the presidential campaign waters." 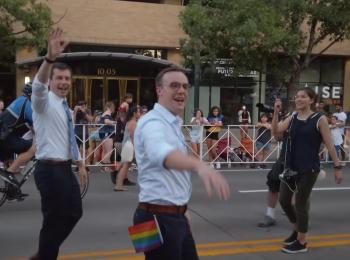 Pete and Chasten Buttigieg in the film 'Mayor Pete.'

Spousal benefits
But then Moss got to know the candidate's spouse. He immediately saw a dynamic for the film after Pete gave a speech to the Victory Fund where he talked about being closeted in South Bend.

"The fact is that when I was younger, I would have done anything to not be gay. If you had offered me a pill to make me straight, I would have swallowed it before you had time to give me a sip of water. It's hard to face the truth, but there were times in my life when if you had shown me exactly what was inside me that made me gay, I would have cut it out with a knife."

"It was really painful," Moss noted, and then [afterwards], Chasten sort of critiqued the speech, and I thought, 'Wow! There's a whole other story here that's about them and their relationship, and how to negotiate it both publicly and privately as this out-gay couple. And it took some of the weight off the political narrative."

Moss continued, "Pete, you know, is very reserved emotionally and hard to access. And Chasten is really different. I felt like I really had to connect with Chasten to really help me understand Pete. So that kind of opened the door for me on this journey. As the relationship moved to the foreground, and some of the politics moved to the back, it became more about their identities as gay men living this marriage in kind of an old-fashioned way, but in a totally new way on a big stage."

That stage also included Chasten's visit to an LGBTQ camp for teens where he revealed, "I went to a high school of 1500 kids, and nobody was out. It was extremely unsafe to be out. I didn't even know anybody who may have been remotely gay."

If only he had had someone like Mayor Pete running for political office back then, life would have been so much easier. The campers concurred, and then they all got out their potatoes for Drag-tato Day and let loose with the makeup on the spuds.

Moss hasn't reenacted Drag-tato Day with his own kids yet, but it brought back memories of working on the documentary about the San Francisco Gay Men's Chorus. 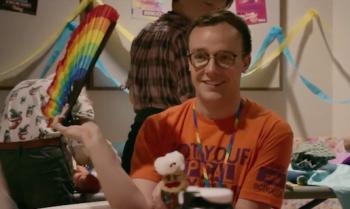 "I directed Second Unit. I loved it. It was so much fun to make that film. On the bus one day, there was a drag contest. It's the only drag contest I ever participated in, and I won a small trophy. It looks like a little Oscar. They gave me the 'Hair to God' award for my drag performance."

As for the queering of the tubers, "It's a beautiful scene, that scene with Chasten and that camp, and kind of [showcases] everything that makes Chasten special, too. He's like a great candidate in his own right. I don't know. I love that. I went out to Chasten's high school in Michigan with him, and he [showed me] 'Yeah, this was the locker I got pushed into.' It was kind of great to be on the campaign trail with him and not Pete. Pete had 50 reporters, and Chasten had nobody, so that was kind of nice for me."

Mayor Pete leaves Pete after he endorses Joe Biden. He is at home, sitting in quiet contemplation in an overstuffed brown leather chair. What has he has accomplished? What will he accomplish?

His closing words: "I don't know what that means for my future. Taking things on and growing. But time is on my side, I hope."

Clearly, his run might have seemed to some like Don Quixote attacking the windmills, but remember Cervantes insisted, "When life itself seems lunatic, who knows where madness lies? Perhaps to be too practical is madness. To surrender dreams — this may be madness. Too much sanity may be madness — and maddest of all: to see life as it is, and not as it should be!"

In first for LGBTQ history, Buttigieg confirmed as Cabinet-level appointee