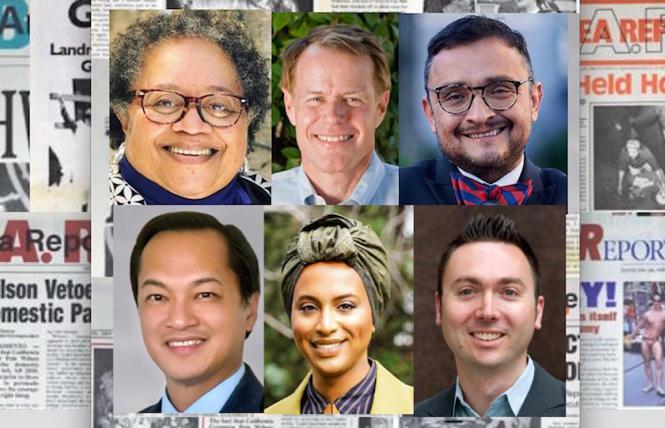 Politics through five decades of Bay Area Reporter coverage will be discussed by an esteemed panel of local officials, with Assistant News Editor and politics columnist Matthew S. Bajko, on Thursday, November 4, at 6 p.m.

The talk will be viewable live, then archived, on the Bay Area Reporter's Facebook page, ww.facebook.com/BayAreaReporter and YouTube channel, www.youtube.com/c/bayareareportersf

Matthew S. Bajko (moderator) is an assistant news editor at the Bay Area Reporter, the country's oldest continuously publishing LGBTQ newspaper, where he has worked for two decades. Since the fall of 2006 he has written the paper's political column, started by gay political pioneer Harvey Milk, covering the Bay Area and California's LGBTQ political scene, and also writes a monthly business news column.

In 2017, he was named a USC Health Journalism fellow and wrote a three-part series on collecting LGBTQ demographic data on government forms and surveys. He was also a 2013 MetLife Foundation Journalists in Aging fellow, overseen by New America Media and the Gerontological Society of America. It resulted in a month-long series on issues facing LGBT seniors that ran in April 2014 and invitations to be a returning fellow in succeeding years.

An award-winning journalist, he freelances for the monthly Noe Valley Voice neighborhood newspaper. For his coverage of the LGBTQ community, he was proclaimed in 2015 a Crown Prince of America of the International Court by Empress Nicole the Great Queen Mother I of the Americas.

Robert Bernardo is the Communications Director for the Port of Oakland, the fifth busiest seaport in the country. The Port also owns and operates Oakland International Airport as well as 20 miles of commercial waterfront that includes Jack London Square. He oversees the Port's press office, advertising and marketing programs, crisis communications, and website.

Prior to the Port, Bernardo worked in law enforcement. He served as a criminal investigator at the San Francisco District Attorney's Office in the 1990s. Bernardo is a former two-term countywide elected official in San Mateo County serving from 2010—2018. He graduated from the University of California, Davis with a Bachelor of Arts degree in English.

When he's not doing his day job or volunteering with the County Democratic Central Committee, he likes to travel to comic book conventions around the world, and he is also an antique art and toy collector.

David Campos currently serves as Chief of Staff for San Francisco District Attorney Chesa Boudin. Campos was brought to this country as an undocumented child, escaping political and economic turmoil in his native Guatemala. He previously served as Deputy County Executive for the County of Santa Clara where he oversaw the Division of Equity and Social Justice, the Office of Labor Standards Enforcement, the Office of LGBTQ Affairs, the Office of Women's Policy, and the Office of the Census, among other agencies.

He served on the San Francisco Board of Supervisors for two full terms, represented District 9, which includes the neighborhoods of the Mission, Bernal Heights and the Portola. A former San Francisco Police Commissioner and former General Counsel for San Francisco Public Schools, Campos is a graduate of Stanford University and Harvard Law School.

Gwenn Craig moved to San Francisco in 1975. By the following year, she had become enmeshed in the lesbian and gay activism sparked by Anita Bryant's national crusade opposing anti-discrimination legislation. She was an active volunteer in Harvey Milk's successful supervisorial campaign.

In 1978, when the statewide Briggs Initiative/Proposition 6 was placed on the ballot to ban lesbian and gay teachers from California public schools, Milk chose Craig and Bill Kraus to co-manage the citywide campaign organization, San Franciscans Against Proposition 6.

Following a successful No on 6 Campaign, Craig served as a two-term president of the Harvey Milk LGBT Democratic Club, and as a national delegate to the Democratic National Convention in 1980 and in 1984, when she chaired the convention's Lesbian and Gay Caucus. In San Francisco, she served on the Police Commission from 1987 to 1992, and twice served as chair of San Francisco's committees on redistricting, in 1995-99 and in 2002. Now retired, Craig worked at UCSF for 25 years as a Human Resources Manager.

Honey Mahogany is a performer, emcee, social worker, and activist who grew up in San Francisco and received her Masters in Social Welfare from UC Berkeley. Mahogany currently serves as Chair of the San Francisco Democratic Party and as a legislative aide to San Francisco District 6 Supervisor Matt Haney. Mahogany is also a co-founder of the Transgender Cultural District and co-owner of the legendary Stud Bar. Mahogany has been featured in publications such as Out Magazine, The Advocate, Forbes, and Vogue and has appeared onscreen in several TV series including HBO's Looking, ABC's Our America, and - perhaps most famously - RuPaul's Drag Race.

Mahogany's work has earned her recognition from the City of San Francisco and the State of California; Sainthood from the Sisters of Perpetual Indulgence; and awards from the Milk Club, SF Young Democrats, SF Women's Political Committee, and the Women's Foundation of California.

Ken Yeager has had a long career in both policy-making and as a leader in the LGBTQ community. He came out publicly in 1984 and soon thereafter co-founded the Bay Area Municipal Elections Committee (BAYMEC), an LGBTQ political organization which, after 37 years, remains the most influential gay political organization in the South Bay.

Yeager became the first openly gay elected official at any level in Santa Clara County when he won a seat on the San Jose/Evergreen Community College District in 1992. He won seats on the San Jose City Council in 2000 and the Board of Supervisors in 2006. He received his Ph.D. from Stanford University, taught at San Jose State University in the Political Science Dept.

In 2018, Yeager became executive director of the non-profit arm of BAYMEC, the BAYMEC Community Foundation, which documents the 50-year history of the LGBTQ struggle for civil rights in Silicon Valley. There are three aspects of the highly regarded project: a website, QueerSiliconValley.org; a museum exhibit that opened at History San Jose in June; and a documentary for classroom viewings.