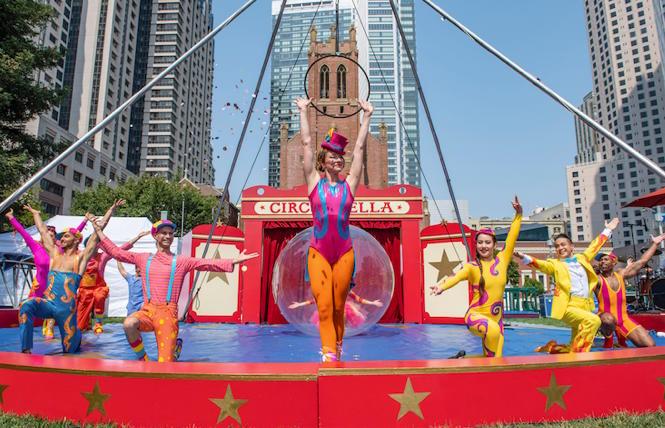 Circus Bella is now in the Bay Area offering the excitement of a circus in their new live shows taking place at various Bay Area parks. The circus is calling their new show Humorous, and it promises to be a celebration of the "phantastic" world of wonder and laughter. Directed by Abigail Munn, the 60-minute performance features a talented and diverse group of acrobats, aerialists, jugglers and clowns, all performing to the live music of Rob Reich and the Circus Bella All Star Band.

Two members of the company are out and proud members of the LGBTQ community. Garrett Allen is a gay man whose specialty is chair stacking. He has been in love with the circus since he was ten years old and has performed all over the U.S. and around the world. Allen's travels have taken him to India, Cuba, China, the Caribbean, the Mediterranean and Latvia. In addition to his chair-stacking abilities, Allen has also been known to engage in aerial rope performances and duo trapeze.

Toni Cannon is trans and performs as a strong man. He specializes in acrobatics and Chinese pole, which is the art of climbing, sliding down and holding poses on poles that can be as high as ten to thirty feet. He has also traveled quite a bit. 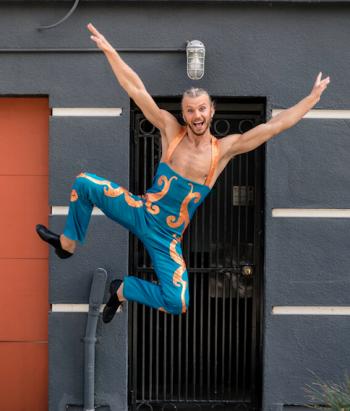 Chair man
Allen recalls seeing a man walking on stilts when he was a young child. He was immediately entranced.

"My grandpa Lloyd built me a pair," he recalls. "And I taught myself how to walk on them, and I'd just do it for fun around the neighborhood, or in the backyard."

He became quite adept at it, and so his grandfather built him a taller pair. Soon he found himself taking classes at the Sophia Isadora Academy of Circus Arts in his native San Diego.

Allen describes chair stacking as a "super traditional circus act." In his act he stacks six wooden chairs on a table all on top of each other as he climbs up them.

"So I'm at least 25 feet off the ground depending how high the table is," he said. "And I do handstands on top of it. The whole stack wobbles and shakes, it's kind of like a thrill act."

He admits that he often gets nervous during his act.

"There's a lot of people who say when you stop getting nervous you should quit," he said. "It's not like I'm backstage sweating bullets dreading going out there, but certainly there's a healthy respect for the amount of risk involved. This particular act is one that I've been doing for eight years now and so it's been the same set of chairs and more or less the same act with the same tricks, so it's a routine that I have really, really rehearsed, every little step of it. It's familiar and I've tested the waters. So it's something that I'm really comfortable with and lots and lots of practice."

Allen also performs with aerial ropes. He has done a variety of aerial acts and has also worked on a trapeze.

"I consider myself so lucky that I get to travel so much for work," he said. "I get to live in a new country, a new culture and get to eat different food, and to perform for people. It's so wonderful. I think performing and art is something that is so fundamentally human and that everyone can enjoy, so to get to go to these places and have people who you may have no form of communicating with, but they can watch me perform and I can see them cheer and clap, so there's a camaraderie."

Allen has always been out as a performer and feels lucky to have come from a home where he was supported, encouraged and nourished. He was always able to talk not only to his parents, but to the people he knew at the circus school he attended.

"I just feel really lucky to have been told that whoever I was is okay," he said. "And I hope that in all of my performances and teaching and workshops —I work with kids a lot too— if just one person isn't being told that who they are is okay and good and exactly who they should be, maybe seeing somebody else who can show them that will make all the difference." 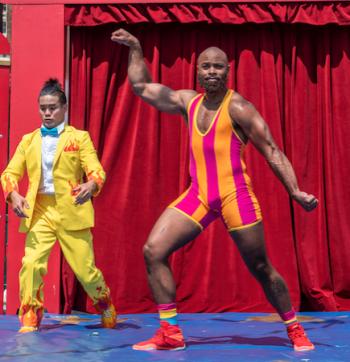 Strong man
Cannon describes one of the things he does as partner acrobatics, which can include doing flips, or handstands where one of the partners stands on the other partner's hands.

In his strong man act, Cannon lifts a person off the ground and bends a metal bar. He got into circus work while working as an optician.

"I've always been intrigued with wanting to find a profession that allows me to be in my body all the time," Cannon said. "So I got a little training. I love that I have to exercise so much in order to keep my job. But I think the thing that draws me the most to performing in general is that it's always different. I get very bored if it's the same thing all the time. Every time you're in a show it's different. And you can always be better."

Cannon is open to doing other types of performances in the future, but for right now he's happy with his circus work. Like Allen, Cannon is out.

"I'm trans," he said. "I think it's really important to be out. It's been fifteen years since I transitioned. I remember how hard it was when I started transitioning because there just wasn't a lot out there. Even now, there are trans people doing circus work but they're not very visible. So I try to make it a point to be that person that it would have been nice to have when I was first coming out."

Allen promises that the show Humorous lives up to its name.

"There's definitely a lot of comedy in it," he said. "We have several clown acts with props and gags. Even the acts that I would not say are directly a clown act, like my chair-balancing act, there's definitely strings of humor pulled into it and interacting with the audience and making them laugh."

Allen has a simple message for those who might be on the fence about attending Circus Bella.

"I would say that there is no better way to spend a beautiful Bay Area weekend than coming down to one of the Circus Bella shows. Pack a small lunch, bring your friends, bring your kids, bring your dogs. Have a little picnic, see a great show, enjoy the beautiful weather. It doesn't get any better than that. Some easy, lighthearted family entertainment in a beautiful city on a beautiful day." 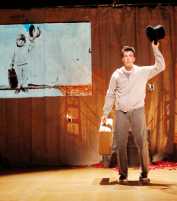 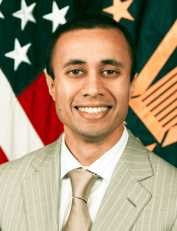