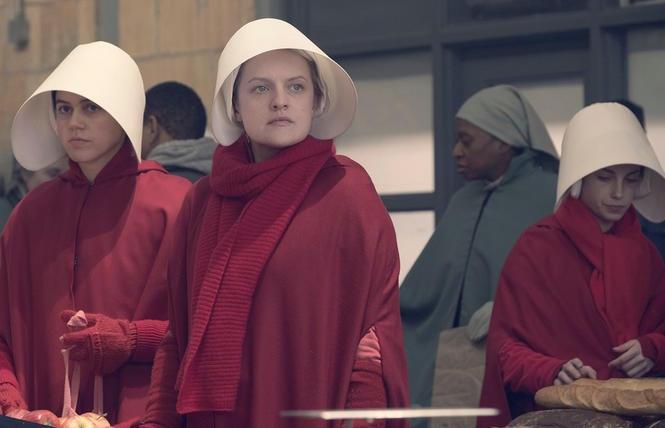 Our climate crisis summer has officially ended with Labor Day and Rosh Hashanah falling on the same day. And if ever there were a time for days of atonement among some in this country, it's now.

We ended up underwater on the East Coast last week in a dizzying 48 hours of tornado alerts in a non-tornado city as 10 inches of rain fell and our phone kept lighting up with flash flood warnings.

Meanwhile half our family has been dealing with fires from Colorado to California all summer. And yet Larry Elder remains unconvinced about the climate crisis even as he's in its epicenter; a climate denialist, and a COVID denialist and anti-vaxxer.

In a one-on-one interview with CNN's veteran reporter Joe Johns, Elder explained his views on everything from COVID to climate to women. Yikes. The GOP had to work to find someone as bad as Donald Trump. Watch the video here.

No matter what, vote No on the recall.

Handmaid's Tale Redux
Texas. The Trump Supreme Court. Bodily autonomy denied. Bounties placed on the heads of anyone who attempts to get an abortion after six weeks when almost no one knows they are pregnant.

On Sept. 3, Sen. Elizabeth Warren (D-MA) asserted that the new Texas abortion law is like The Handmaid's Tale, and said, "When abortion is illegal, rich women still get abortions."

Yet corrective rape of lesbians, assaults on bisexual women and trans men are all lived realities in our anti-LGBTQ society. There is no exception for rape or incest in the Texas law. But there will be many people eager to inform on a queer person seeking an abortion for that $10,000 bounty.

In The Handmaid's Tale, Offred (Elisabeth Moss) wonders who informed on her and her family: "It could have been a neighbor, watching our car pull out from the driveway in the morning, acting on a hunch, tipping them off for a gold star on someone's list."

The four seasons of the Emmy-winning and queer-infused The Handmaid's Tale are presented as dystopia, but we are living that reality now, right here, not in Gilead, the setting of the series.

Gilead is ruled by a fundamentalist regime that treats women as property of the state, and is faced with environmental disasters and a plummeting birth rate. In a desperate attempt to repopulate a devastated world, the few remaining fertile women are forced into sexual servitude.

Art imitating life imitating art. If you haven't seen this stellar series, season four of which just ended in June, now is a good time to watch, as new series will be airing in October. The Handmaid's Tale is the first show produced by Hulu to win a major award as well as the first series on a streaming service to win an Emmy for Outstanding Series. 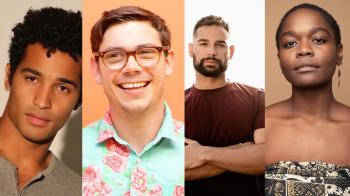 Devin Way, Ryan O'Connell, Johnny Sibilly and Candace Grace are among the cast of the new 'Queer as Folk.'

More Queer as Folk
For years we have wanted a reboot of the iconic, but Queer as Folk series and now it is happening. Currently in pre-production with a chef's kiss perfect and pretty cast, the series will be aired on NBC Universal's streaming platform Peacock.

NBC describes Queer as Folk as "a vibrant re-imagining of the groundbreaking British series created by Russell T. Davies, exploring a diverse group of friends in New Orleans whose lives are transformed in the aftermath of a tragedy."

Oh yes. We used to live in New Orleans and it is the perfect setting for tragedy and queerness, as Tennessee Williams made vividly clear.

Jaclyn Moore is an executive producer and writer for the series. Moore is an award-winning trans writer whose credits include Dear White People and Love Life.

Dunn said, "When the show originally aired, the idea of unapologetic queer stories on TV was so provocative that I felt I could only watch Queer As Folk in secret. But so much has changed in the last 20 years and how wonderful would it be if the next generation didn't have to watch Queer As Folk alone in their dank basements with the sound muted, but with their family and friends and the volume cranked all the way to the max."

The show's cast includes one of our faves, Jesse James Keitel, who has been heartbreakingly good as the trans feminine singer on ABC's Big Sky (new season starts Sept. 30!). Keitel is the first nonbinary actor to play a nonbinary series regular on primetime TV.

Johnny Sibilly, Devin Way, Candace Grace and Fin Argus are also among the stellar and did we say gorgeous cast.

Also in the cast is Ryan O'Connell, the star of Netflix's Special. O'Connell will also be executive producing and writing for the series. It will be groundbreaking to have a disabled and sexually active gay character in the ensemble cast. 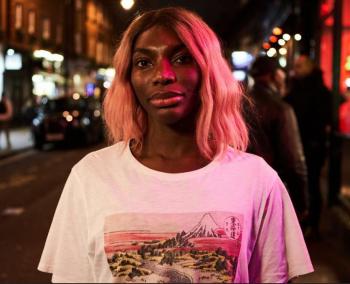 Michaela Coel in 'I May Destroy You'

Representation Matters
Some personal faves —Hacks, I May Destroy You and Pose— were among the winners at GALECA: The Society of LGBTQ Entertainment Critics' Dorian TV Awards.

Pose was named best drama series. Mj Rodriguez, one of the series central characters, received the LGBTQIA Trailblazer Award "for creating art that inspires, truth and equity." In July, Rodriguez became the first trans actor nominated for an Emmy in the lead drama category.

"There's a generation behind me that needs to know what transness looks like," Rodriquez said while accepting the Dorian Award. "I'm going to keep trying my best and instill hope."

The Wilde Wit Award went to Saturday Night Live performer Bowen Yang. That honor goes to a "performer, writer or commentator whose observations both challenge and amuse."

While accepting the accolade, Yang said he was a major fan of the award's namesake, Oscar Wilde, so his Dorian win felt "a little too on-the-nose."

GALECA's Dorian TV Awards, named after the brilliant and acerbic Irish poet Oscar Wilde, began in 2009. The awards "give a toast to the finest in movies and television across the board, from mainstream to queer."

Boy Band in Paradise
Perennial boy band cutie Lance Bass loves The Bachelor and has hosted Bachelor in Paradise. Bass told Variety in an exclusive mini-Zoom interview, "If you want the most dramatic season ever, do an LGBT version." 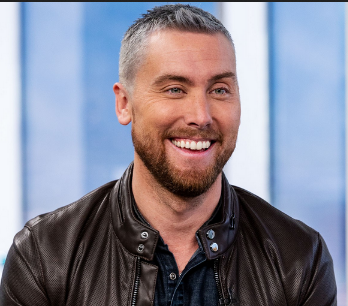 Bass said, "I think maybe it's the time for The Bachelor to do a gay Bachelor. I think that would be so much fun."

Bass added, "And I definitely know a host if you need it. I have not talked to anyone about that, but I would be so down."

There have been few dating series with queer contestants and we would so watch every minute of a gay Bachelor. Make it happen, ABC!

So for the fun and the frolicsome, the dramatic and dystopian, you really must stay tuned.