A scene from Maury Yeston's 'other' 'Phantom of the Opera' musical Yeston, the man behind Tony Award-winners Nine and Titanic, as well as Grand Hotel, Death Takes A Holiday, and what has come to be known as the "other" Phantom of the Opera, has had a fantastic career in the theater.

As if to drive home that point, we have two recently released albums; Maury Sings Yeston and Anything Can Happen in the Theater: The Musical World of Maury Yeston (both on PS Classics). The title of the first says it all; it's a collection of demo recordings of Yeston performing songs from his canon. The second is the cast recording of the off-Broadway musical celebrating Yeston's theatrical accomplishments. Yeston was kind enough to answer a few questions about his work in early 2021. 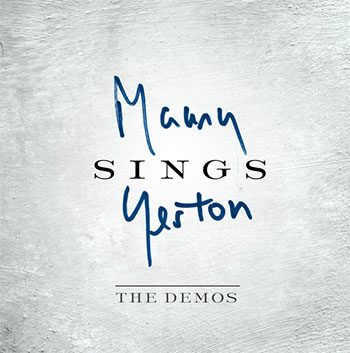 Gregg Shapiro: I'd like to begin by wishing you a belated happy 75th birthday. Were you able to find a way to celebrate in the midst of the COVID-19 pandemic lockdown?

Maury Yeston: Thanks. I'm touched and honored to have had two new albums welcomed by the public during this time...and grateful for the folks who have enjoyed my work.

On the double-disc set Maury Sings Yeston (PS Classics), listeners have the chance to hear recordings of you performing your compositions over a 40-year period, which you describe in the liner notes as "...personal private notes. They are my work product and process recorded often at the earliest stages of writing, and were never meant to see the light of day." Now that the album is out there, what does it mean to you have shared them with your followers?
It means a great deal to me. First, because it's the greatest privilege in the world for an artist to be received by the public — for the audience to be moved or entertained by one's work and to make a connection to others all over the world. To have had the experience of standing waiting to cross the street and hearing a stranger next to you humming one of your tunes...is indescribable.

In addition to Maury Sings Yeston, the original off-Broadway cast recording of the musical revue Anything Can Happen in the Theater: The Musical World of Maury Yeston (PS Classics), conceived and directed by Gerard Alessandrini, was also released in 2020. Alessandini has been spoofing you since his first installment of Forbidden /Broadway. Is that how you came to work together on Anything Can Happen in the Theater?

I've known and loved and been a friend of Gerard's since the early 1980s when he was a participant for a number of years in the BMI Music Theatre Workshop — over which I presided. He continually would bring in gifted material, mew theatrical songs for promising new shows he was writing.

One day he brought in a hilarious spoof of a well-known Broadway song, and it brought down the house. He loved doing it and we all encouraged him to continue. As soon as Forbidden Broadway became a smash, both Stephen Sondheim and I immediately began the practice of sending Gerard our scores to any of our new shows just as soon as they opened! That process still continues! When Gerard branched out to directing, he really showed his true mettle, directing a regional production of my In The Beginning in Maine, and of course Anything Can Happen... in NYC. 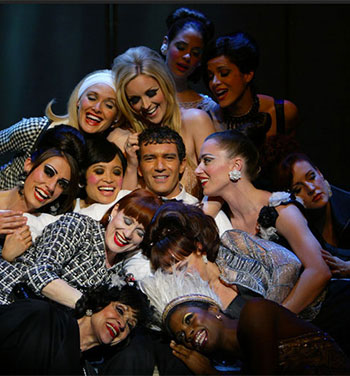 Antonio Banderas (center) in the Broadway production of 'Nine.'

One of the most fascinating aspects of your creative career is musicals such as Nine, The Phantom of the Opera and Grand Hotel, which were based on movies. Can you please say something about what is appealing about that transformation process?

Film, theater, and music all share a common remarkable and magical characteristic — they all unfold in time. They create mood, touch the emotions, have the capacity to describe locations, vague sensations, intimations, yearnings —wordlessly. This has always been true in music.

Whether it's Schubert creating the sound of a galloping horse on the piano to accompany a song about a father riding desperately to the doctor with his sick child in his arms, or Debussy making you smell the salt air and feel the undulating waves of the sea with only the sound of an orchestra, or Richard Strauss musically showing you Don Quixote passionately charging against a windmill!

I loved creating the beach at the beginning of the second act of Nine: The Musical, by simply alternating two chords in the orchestra that simulated the slow wafting of the waves, gently rolling in and inexorably retreating back to the sea along the beach. Film has always seemed to me to be a natural medium that provided me an impetus from which I could gain inspiration to paint a story onstage with music.


Do you have an all-time favorite recorded rendition of one of your songs, either from a cast recording or an album by a particular performer?


Of course, please do.


Over the years, your songs have been performed by Raul Julia, whom you mentioned, as well as Barbra Streisand, Betty Buckley, Antonio Banderas, Laura Benanti, Daniel Day Lewis, Nicole Kidman and Sophia Loren, to name a few. Is there someone who has yet to perform a composition of yours that you would love to hear sing one?

Is there someone who never had a chance to sing one of your compositions that you wish had done so?

Both Maury Sings Yeston and Anything Can Happen in the Theater albums contain songs from The Queen of Basin Street, your unproduced early 1980s musical adaptation of La Cage Aux Folles, which predates the musical of the same title. With that in mind, can you please say something about your awareness of a following for your work in the LGBT community and what that following means to you?

Ever since attaining the age at which I could learn about and begin to understand the LGBT world, and the breadth and diversity of enlightened human experience that has illuminated so much of what we call humanity — in all its ramifications, my education never ceases, nor does my will to practice humility in my work.

The film La Cage aux Folles (just one of a number of others, including The Boys in the Band) held such joy and so brilliantly portrayed the normalcy of the interactions of a wonderful family - I felt immediately it was a film about a loving parent who was hilarious, protective, might perhaps be embarrassing (and who ultimately stands up with dignity) — and it took America by storm and became one of the highest grossing foreign films in our history. I must point out, at the time (the early '80s), that was not remotely the America of today. Things have indeed changed (though we still have a long way to go).

I felt so strongly it had to be a show! Everything in it seemed to need to explode in song. I loved writing it. Allan Carr, Mike Nichols, Tommy Tune, they all loved it as well. Somehow the show did not get on. That's the vicissitudes of show business. Yet, in 1980-81, in the midst of the AIDS crisis, there was another project I was also drawn into: the American premiere of Caryl Churchill's Cloud Nine, directed by Tommy Tune, and I was asked to write the incidental music for the production.

This play, a masterpiece from the moment it appeared onstage in the U.K. (and then here), radically challenged and explicated the role of gender politics, power and sexuality in a historical and metaphorical context with respect to race and gender in the context of British Imperialism, as well as in contemporary society. I wrote a song (eventually cut) to be sung at the end of it ("Another Day in the Modern World") that is included on Maury Sings Yeston.

That song transports me back to the pain and joy of that time and somehow brings back to me the love, the dread, and the hope of our daily lives that we lived then. In answer to your question, the song speaks for itself.