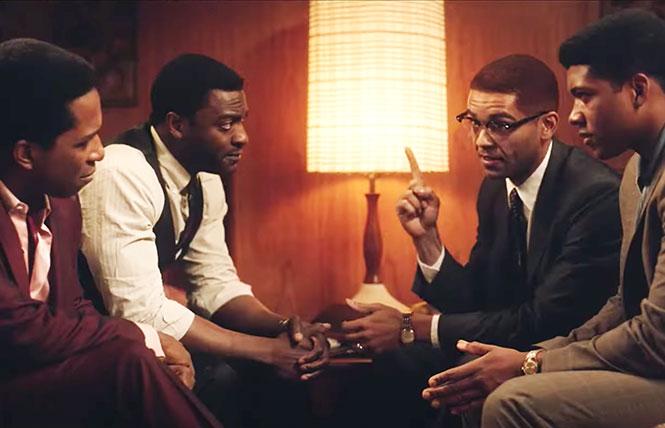 In late 2020 and early 2021, two movies that became available on streaming platforms —Ma Rainey's Black Bottom and One Night in Miami... (Amazon Studios)— have more in common than you might expect.

Both were based on plays by Black playwrights and feel theatrical and stagey in good and bad ways. Both are set in the past and deal with racist issues, making them timelier than ever. Both feature a singer among the lead roles. Both star a majority Black cast and are helmed by Black directors.

Directed by Oscar-winning actress Regina King, One Night in Miami... is a fictional dramatization inspired by true events. An adaptation of Kemp Powers' play of the same name, it brings together four men from different backgrounds whose contributions to Black culture continues to resonate to the present day.

Beginning in 1963, the introductory sequence of the movie shows each of the men in personal and professional interactions. Fast-talking and fast-moving Clay loses a boxing match at Wembley Stadium in London. Cooke fails to win over an all-white audience at The Copa in New York. Brown experiences an unexpected racist slur from an old family friend in Georgia. Finally, Malcolm, his wife Betty (Joaquina Kalukango), and their daughters may lose their home if he proceeds with his plan to leave the Nation of Islam.

But in 1964, the four friends' fortunes are about to turn around. In a match against Sonny Liston in Miami Beach, Clay defeats his opponent to become the world heavyweight champion. Before the match, Clay meets with Malcolm at the Hampton House, a segregation-era motel in Miami Beach, so they could pray together.

Clay, who is seriously considering converting to Islam, is actually the trump card for Malcolm's next step in life. As we soon discover, Clay is unaware of this. Nevertheless, his triumph in the ring was a reason for the four men to gather. 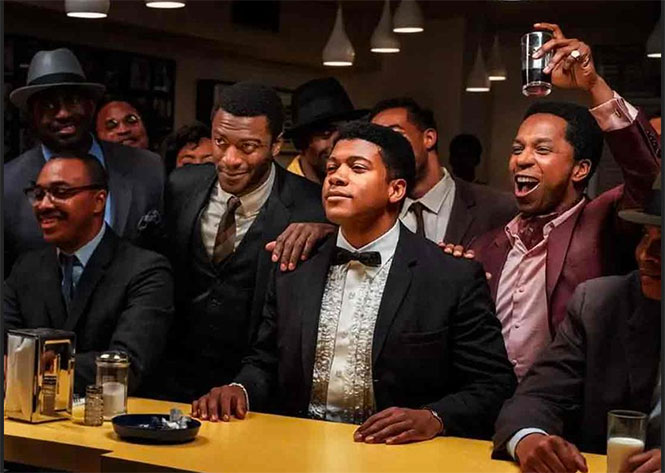 However, none of them probably anticipated the volatility of such a congregation.
Malcolm, under the watchful eye of bodyguards, the strict Kareem X (Lance Reddick) and more easygoing Jamaal (Christian Magby), is also aware that he is being observed by outsiders and is feeling pressured. So, in the midst of the celebratory atmosphere, something is boiling and brewing under the surface.

The verbal attacks they level against each other are personal and political. Their life decisions are scrutinized and judged; Malcolm for his unwavering religious devotion, Brown for abandoning his athletic career to go Hollywood, Cooke for wanting to be embraced by white audiences.

Only man-of-the- hour Clay, who would go on to change his name to Muhammad Ali as part of his conversion, manages to remain somewhat unscathed, although the threat of physical violence hangs in the air.

All four lead actors are incredible in the embodiment of their roles. Goree and Odom are particularly riveting, each giving an Oscar-worthy performance.

However, like gay director George C. Wolfe's adaptation of the Wilson play, King's rendition of Powers' work is most electrified (and less claustrophobic) when it steps outside of the 'set,' in this case the motel room; whether it's on the motel's roof with the view of Miami, a nearby liquor store parking lot, in a bar celebrating Ali's win, or on the set of The Tonight Show.

Regardless, King also deserves kudos for her impressive directorial skills. Rating: B+