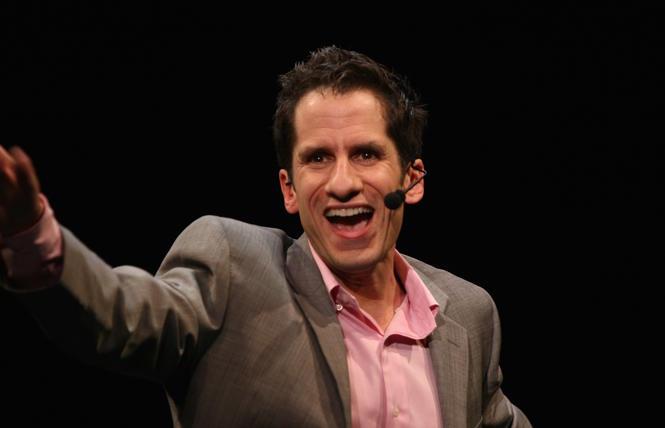 Some time after the 500th episode of Stars in the House, Seth Rudetsky lost count.

Cohosting the sometimes twice-daily YouTube shows with his husband, actor-producer James Wesley, with guests in theatre, television and film, plus composers and health officials, since March 2020, has been an amazing, if not dizzying, accomplishment.

Rudetsky, 53, a veteran theatre pianist, has been part of the orchestra pit for numerous Broadway shows. He also hosts his own Sirius/XM Satellite Radio show, On Broadway, and has created a few of his own musical plays and numerous benefit concerts onstage before the pandemic inspired he and Wesley to quickly adjust to home entertainment.

That includes his converted live concerts with Broadway and TV performers that until early last year toured the country, including San Francisco.

Now, fans and donors enjoy hundreds of recorded at-home chats with special guests ranging from Chita Rivera to Laura Benanti, five of the men who starred in The Phantom of the Opera, a group of 'Effies' from Dreamgirls, or even cast members of hit TV shows like Frasier and The Waltons.

Each episode of Stars in the House includes a brief update with Dr. Jonathan LaPook (Chief Medical Correspondent for CBS News).

And even before the pandemic, it's all been for a cause, to raise money for The Actors Fund, a decades-long nonprofit that supports unemployed people in the performing arts; not just actors, but technicians, musicians and theater staff. Rudetsky and Wesley's shows have so far raised more than $700,000.

Armed with an encyclopedic knowledge of musical theatre, and brilliant piano skills, Rudetsky also has many YouTube videos in which he analyzes classic songs (like A Chorus Line's "At the Ballet"). Oh, and he's also an author of half a dozen books. To use his catch phrase, "We're obsessed!"

In a recent phone interview with the Bay Area Reporter, Rudetsky said of one of the popular show themes are TV cast reunions. "When I get someone like Marcia Cross, who did a benefit for us, to get the Desperate Housewives cast together, we have all those connections after that. Marilu Henner got us all the people from Taxi." 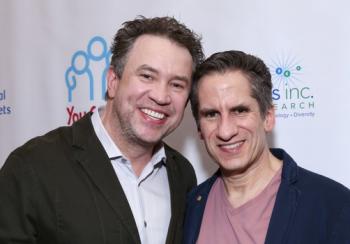 While the technical aspects of the chats do include a few predictable glitches, things have improved. Most actors and singers are at home anyway, and have stepped up their Zoom/Streamyard skills.

But the more produced Concert Series shows are, as Rudetsky said, "a whole other level." Synching his piano-playing from his home in New York with Wayne Brady's in Los Angeles is a bit more technically demanding. But as the recent concerts with Jeremy Jordan and his wife Ashley Spencer, and Mamma Mia! and Anastasia star Christi Altomare prove, they're worth the effort.

"Some people I've known for years, some I've met a few times," said Rudetsky. Either way, it's really fun, with people talking about their careers, or old friends sharing their stories, or it's me learning about somebody's career. I enjoy both."

Whether he's dishing with ebullient composer Marc Shaiman (Hairspray) or reminiscing with Betty Buckley as they watch rare excerpts of Carrie the Musical, viewers get an intimate night with performers who are also dealing with the pandemic.

Rudetsky notes his early beginnings in musical theatre shows with Broadway Chatterbox. "In the 1990s, I would do various benefit concerts, and I would talk to the performers beforehand to get material for them to tell a story. My friend David Friedman [conductor for Aladdin and composer of the song "Help is on the Way"] said that what's so fun about my shows is, 'You're such an insider but you're also a fan.'"

Rudetsky commented on how musical theatre performers on talk shows would often get only a few minutes. "It drove me crazy that they got so little time to talk about their work, and the interviewer wouldn't even know what they were doing. One time, I was promoting a concert of Funny Girl with Idina Menzel, and the host said, "And we hear that this time, it's a musical!"

Thus grew his inspiration to host a more in-depth talk show about show business. "Something like when you out to a diner with actors after a show and tell stories," which became Broadway Chatterbox, a one-hour weekly show at Don't Tell Mama, a midtown cabaret.

When Rudetsky later brought his comedy show to Provincetown, he conceived his concert series with producer Mark Cortale, but with a new twist.

"I've always hated patter," Rudetsky admits of the often over-rehearsed monologues cabaret performers utter between songs. He instead chose to interview performers between songs, with a loosely structured format. "Our 'patter' is more Broadway inside stuff, which I —and the audience, I hope— find fascinating. We'll relate a song to something in their lives, or sometimes do a song off the cuff. It really took off, and we toured, and now it's an online concert series." 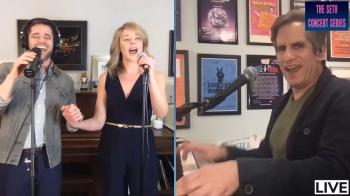 Jeremy Jordan and Ashley Spencer perform with Seth Rudetsky in a recent concert.

The casual combined with professional singing made the shows, and now the online concerts, unusual. Guest stars may sing their known favorites, but also a song from a show they auditioned for but never got cast in.

"Of course, it's planned, but sometimes, with these live online shows, we've done some songs that are completely unexpected," said Rudetsky. "Jessie Mueller did "On My Own" from Les Mis[erables], because I asked her why she'd never been in that show."

At the mention of the term musical 'genius,' Rudetsky remained modest, despite his talent. "I'm not like Marc Shaiman (a frequent Stars in the House guest), who can whip a song out of the air. I've been playing for years, so I know a lot of music."

Talented since childhood, Rudetsky, raised in North Woodmere, New York, got a degree in Piano Performance at Oberlin College's Conservatory of Music in Ohio.

"I love performing and music-directing, but I never thought I could be a concert pianist," he said of his self-made career, as in the 1980s, no colleges offered degrees specific to his goals. Although Oberlin's program focused on classical music, "It was so liberal," he joked, "like a gay bar with dorms." Radio and comedy shows in his free time led to his later diverse career.

Along with his later musical theatre work, he's been Emmy-nominated three times for his comedy writing for The Rosie O'Donnell Show, created opening numbers for the 1998 and 2000 Tony Awards, acted in a 2007 production of The Ritz, and co-created, with Jack Plotnik, Disaster!, which enjoyed a three-year run Off-Broadway, and a 2016 Broadway production.

Most recently, Rudetsky and Wesley collaborated with multiple singers, actors and production staff to create a Biden/Harris Inauguration segment of a medley, "Seasons of Love" from Rent and "Let the Sunshine In" from Hair.

Asked who among the many guests he's featured on Stars in the House are among his favorites, Rudetsky cited the cast reunion of The Comeback.

"We love that show; watched it three times. It was amazing to get the inside scoop on that with Lisa Kudrow. For TV, that and SCTV were two of my favorites. I grew up obsessed with Andrea Martin (who also won a Tony for her role in Pippin's revival), and now she's like a close family friend."

For Broadway-themed shows, "Definitely having cast members from A Chorus Line was the best. That show was kind of the gateway drug for Broadway fans. It made everyone in theatre want to do theatre. They were like heroes to all of us."

Mention of the classic musical about an audition for dancers led back to Rudetsky's fascinating deconstruction of one of its Marvin Hamlisch songs, "At the Ballet."

"It's one of my favorite things to do," he said, "so they understand why it's good, not in a boring scientific way, but an appreciative way."

Also appreciative are the thousands of donors who give money during and after the Stars in the House programs. Rudetsky noted that the beneficiary The Actors Fund, not only offers financial help. "They also offer career transition advice for retired dancers, and anyone in the arts. But right now, it's definitely financial; helping pay peoples' rent, medical bills, even groceries."

Other shows have focused fundraising for various groups like the NAACP, youth arts programs and animal welfare nonprofits. What's also been touching is the number of LGBT guests who sign on with their spouses, kids and even pets.

"We really take it for granted, 'my husband' or 'my wife,'" noted Rudetsky. "It's really only very recent that we've had this in our lives."

Who is the one guest he still longs to include in his shows or concerts?

"I've always wanted to talk to Barbra Streisand," he said. "I never got to interview her. I did meet her, at least." He also mentioned Jennifer Aniston, composer Stephen Sondheim, and his hopes for a cast reunion of The Mystery of Edwin Drood. He also agreed that perhaps lesser-known ensemble performers would be interesting. "They go from show to show, and they've been through it all."

Asked how things are going, specific to he and his New York colleagues, Rudetsky said bluntly, "There's no work. That's the worst of it. Some of the theatre people are doing TV work, but there's nothing going on theatrically. I really don't know how people are surviving, because there's no income."

He did mention a recent outdoor production of Godspell that followed all health protocols. While recalling ancient Greek ampitheatre roots, such stagings aren't possible in the middle of winter.

New production of a classic musical