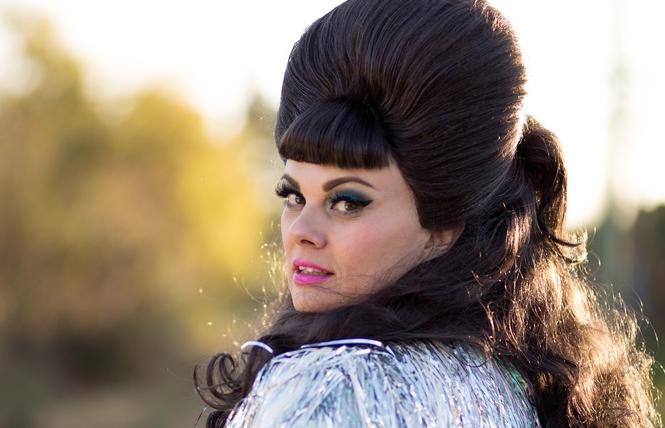 Chickaboom! (Outside), the 2020 album by Tami Neilson, the self-described "hot rockin' lady of country, rockabilly and soul," is being reissued in an expanded digital-only edition including five live bonus tracks. On the original version of Chickaboom!, Neilson lives up to her claims. She seriously belts like nobody's business over the course of ten tracks, all the while not taking herself too seriously. It's a righteous blend that works well on "Call Your Mama," "Hey, Bus Driver," "Queenie, Queenie," "Tell Me That You Love Me," and the roof-raising "Sister Mavis," a musical tribute to Mavis Staples.
www.tamineilson.com

Reigning queen of hip-hop soul Mary J. Blige had her work cut out for her when it came time to release her second album, 1994's My Life (Uptown/Republic/ UMe). Newly released in a remastered triple LP translucent blue vinyl 25th anniversary edition, My Life had the burden of following up Blige's exceptional 1992 debut What's the 411? While not as immediately captivating as its processor, My Life had its own charms and personality.

However, here's an unexpected outcome of re-releasing an album on vinyl that was previously only available on CD: previously overlooked imperfections and weaknesses come into sharper focus. Because a CD plays straight through without interruption (read: being flipped over), the songs tend to blend into one piece, if you will.

In the case of side one of My Life, Blige gets off to a stellar start with "Mary Jane (All Night Long)" on which she positions herself as a vocalist on par with, dare it be said, Ella Fitzgerald. She follows it with the equally solid numbers "You Bring Me Joy" and "I'm The Only Woman," but loses momentum on side two with "You Gotta Believe," "I Never Wanna Live Without You" and the title track.

Redemption can be found on the second LP, in the retro soul of "I'm Goin' Down," as well as "Be Happy," "No One Else," "I Love You" and "Be With You." The third LP in the set features rare remixes including two of "Be Happy" in addition to Blige's rendition of "(You Make Me Feel Like a) Natural Woman."
www.maryjblige.com

When you hear songs such as "Impeachment Now!" and "James Madison," it becomes obvious that the six-song EP Live at Northfire (Wirl Records) by Pamela Means and the Reparations (Cinamon Blair and I-Shea) was recorded before the 2020 election. While it is a new release, it was, in fact, recorded pre-pandemic in August 2018. Nevertheless, Means' queer activist voice comes through loud and clear on those songs. The same can be said for "Color of the Skin" (also written and recorded before the death of George Floyd and resulting protests) and "Hands Up" (which includes the lines "Gonna love out loud not afraid/Gonna march down Main in the Pride Parade"). Means also reminds us that she knows her way around relationship songs on "My Love" and "Cinnamon and Chocolate."
www.pamelameans.com

After releasing a pair of well-received albums on Sugar Hill, Nashville-based singer/songwriter Liz Longley parted ways with the label. On her newest release, Funeral For My Past, "made possible by Kickstarter supporters," Longley once again finds a way to put her amazing voice and exceptional songwriting skills front and center. As you might glean from the album's title, there is a sorrowful quality that permeates the album, as heard on the title cut, "Torture," "Long Distance," and "My Muse." If there's any justice, the breathtaking "Fine" will reach the wide audience it deserves.

Don't Let the Ink Dry (37d03d), the ethereal and atmospheric debut album by Eve Owen, is also worth your attention. Produced by The National's Aaron Dessner, the dozen tracks come across like futuristic folk songs. The combination of Owen's diaphanous vocals and the ultra-modern musical arrangements make for an unforgettable listening experience, particularly on "Lover Not Today," "Mother," "I Used to Dream in Color" and "So Still For You."
www.straightxnarrow.com

Produced by the legendary Steve Albini, Stay Alive (Polyvinyl), the solo debut album by trans singer/songwriter/activist Laura Jane Grace (of Against Me! fame), didn't turn out as planned. The songs were meant for a new Against Me! album, but COVID-19 changed all that. Making tasty lemonade out of the lemons she was handed, Grace recorded the songs with her (mostly) acoustic guitar, as well as the occasional drum machine ("Shelter In Place" and "Ice Cream Song"). "Return to Oz" (not to be confused with the Scissor Sisters song of the same name), "The Swimming Pool Song," "The Mountain Song" (in which Grace sings, "I'm all fucked up/But I'm alive"), and "Blood & Thunder" (said to be a love song to her home city of Chicago), capture the tainted 2020 spirit in a nutshell.
www.bloodshotrecords.com