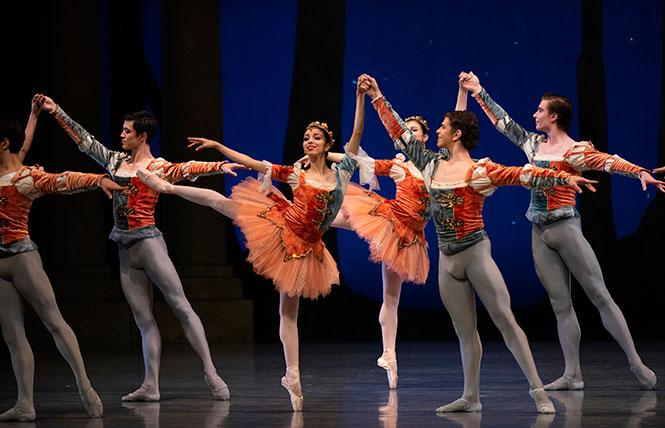 San Francisco Ballet's online opening night could have been cause for concern. Dance does not record well; how diminished a thing is this going to be?

Would they be ready? Would the dancers be out of shape? Would their technique have gone ragged? Had they have lost stage presence? Show signs of strain? Would long-time favorites dancers still be here? Would they be wearing masks of forced gaiety? And also, will they answer the questions of diversity and inclusion?

Yes they were ready. Yes, we have a Black ballerina, Nikisha Fogo, who danced ravishingly. Artistic Director Helgi Tomasson left Ms. Fogo's dancing to prove itself as the climax of the evening; but he set out to answer the readiness question immediately.

The first dance in the online season premiere featured Bianca Teixera and Natasha Sheehan in the lowest ranks dancing like stars — and then brought out for a solo, the audience favorite corps dancer, Diego Cruz, recently elevated to 'soloist.' A performer whom everybody loves, his solo gave him every step he does well, and he has wonderful footwork, but also very easy hips and a kick to the front that's higher than a Rockette's.

Helgi Tomasson's new ballet, "Harmony," is set to a baroque dance suite by Rameau, from Louis XIV's era, but it looked as fresh as a costume drama on Netflix —with fanciful 18th-century waistcoats and matching hot pants— as the dancers tore it up.

Then came Lucas Erni, with a variation that included a startling tour jeté, landed in the wrong place, but it's right. And just in case you could not believe your eyes, he does it again. We saw an excerpt of that. I'm eager to see the whole thing. Even in flat-on video-capture, it's exhilarating, one of those ballets where you just go along for the ride.

Rameau's gavotte has a delicious dance-impulse, born of court dancing in an era when everyone in power had to dance, and the king (Louis XIV) was actually a superb dancer. Conventional steps are made to seem spontaneous. The company danced with the élan of kids at a club, or on skateboards, or hanging from the straps on BART.

Next up was a duet for our most-loved ballerina, the impossibly long-limbed Yuan Yuan Tan, who did all her best moves in choreography created by Yuri Possokhov in an homage to her mother, who sat in a chair and seemed to be saying, "This is my beloved daughter, in whom I am well pleased."

Other production numbers were dances actually choreographed for film, with fancy camera-angles. This kind of work gets flat-screen dance up towards the level that live dancing, in 3-D, with gravity and real space-time, can actually have. 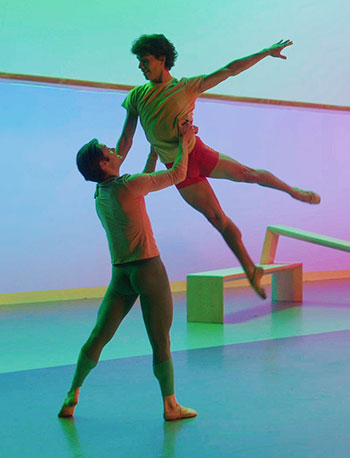 Better with Ezra
The famous dance filmmaker Ezra Hurwitz has made a sensational video of Myles Thatcher's new work, which shows the great ballerina Frances Chung sitting on a bench at SF MOMA looking at a yellow and red-striped painting which happens to echo the color of the jacket Chung is wearing. Her sneakers are turquoise, and suddenly she freaks out, as if the painter stole her idea and published that shade of red before she got the chance.

Whatever the reason for her sudden outburst of movement —which is explosive— it's probably not as interesting as the dance phrases that follow, which flash across the screen, set to Steve Reich's pulsing minimalist score, with incredible rapidity and precision.

Her moves are sudden, inexplicable, and drastic, and — such is Hurwitz's magic — she's suddenly in pointe shoes in different colors and moving just as fast and with equal ease and precision. Cut to Sasha da Sola chewing gum despondently on a staircase, and then two guys folding yellow paper into airplanes.

Who knows what this is about, but it's sensationally exciting. The boys pick up speed, and everybody keeps going through the looking glass into dance-gear in a pastel studio. I can't wait to see the entire dance, which will be on one of the regular-season mixed bills.

Similarly exciting, but in a different key, is the "I don't like you but I love you" video Wooden Dimes, a ballet by Danielle Rowe (who directed the filming) with a hot and creepy corps of dancers who represent the emotions that torment Luke Ingham. His relationship with Sarah van Patten seems to have gone way past sour.

The excerpt gave visible form to Ingham's disruptive emotions, and it is nightmarishly brilliant, tuned to telling that part of the story. The video's murk is hot and creepy. Rowe has cast this to the hilt. Ballerina Dores Andres is thrilling in this material, and principal dancer Max Cauthorn seconds her admirably. This excerpt also comes from a one-act number that will be shown in the regular season. 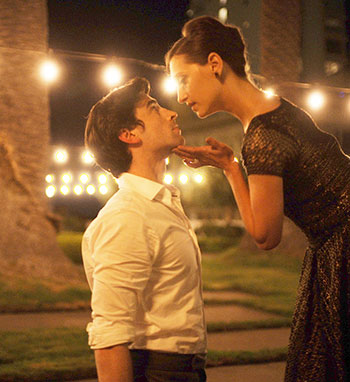 And I haven't mentioned Mrs. Robinson, with Sarah van Patten as the cougar and Joseph Walsh as 'The Graduate,' and poor Luke Ingham, the rat-race-obsessed husband ("I have just one word to say to you, young man: 'plastic'") Mrs. Robinson can not abide.

Van Patten is the company's finest dramatic dancer, who has alas been shunted into hungry roles, perhaps too soon? She can do it, and Cathy Marston seems to love working with her. Van Patten was certainly magnificent as the bitter invalid wife in Marston's Snowbound. But Van Patten is probably still the greatest Juliet in the company.

We're not likely to get a chance to answer that question, because this season ends the tradition of giving many dancers the chance to have their turn. The penultimate full-length program is a screening of the Lincoln Center at the Movies from 2015. A production of SFB's Romeo and Juliet features the ballerina Maria Kochetkova, who's since left the company but still has many fans here and around the world.

Video means there'll be only one version of each show per program. It's a big change. A theatrical run would have given many dancers their chances. Wednesday nights and Saturday matinees were the new kids' chances.

The season to come comprises seven programs. There will be three full-length story ballets: A Midsummer Night's Dream was recorded last March, with Esteban Hernandez as Oberon, Sasha de Sola as Titania, the outrageous soloist Sasha Mukhamedov as Hippolyta, and Elizabeth Powell tremendously impressive as Hermia.

A transcendent performance by Frances Chung and Ulrik Birkkjaer in the second-act pas de deux will be the first ballet of the season. Romeo and Juliet and Swan Lake are archival videos that close the season.

One hybrid full-evening piece, George Balanchine's magnificent Jewels, is a pure-dancing ballet which doesn't have an overt story but which does have a strong through-line and will be featured in Program 4.

The other four will be mixed bills of wonderful archived repertory, which will give us a chance to see great dancers like Guennadi Nedviguine in Tomasson's delightful Bach-fest 7 for 8 in Program 3, and Pascal Molat again in Rubies, Program 4. These are dancers who long-time fans have not forgotten.

Digital Programs also include a Gay Night In, with Thatcher's new work and also Mark Morris's truly gay Sandpaper Ballet, the only comic ballet I've ever seen that never gets old.

All the details, including what devices you may watch the shows on, are available at www.sfballet.com. Online programs begin January 19. The options are formidable. Tickets range from $29 for single stream access to $289 premium plus packages.