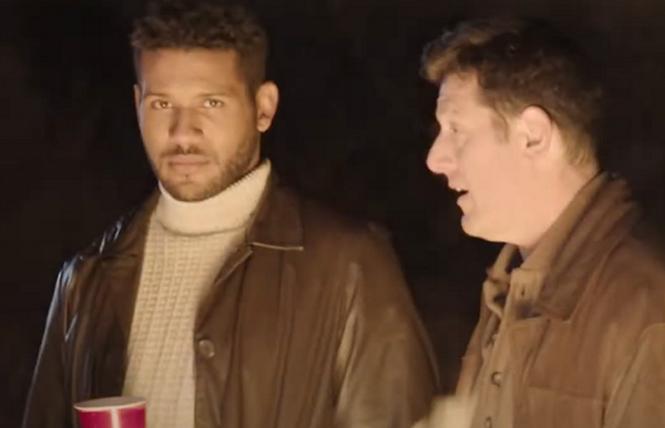 If you were the least bit disappointed by Antebellum (and let's face it, who wasn't?), then Spiral, airing on AMC Network's Shudder channel, might be more to your liking. By combining elements from classic modern horror influences, from Polanski to Peele, and adding some specifically queer twists, Spiral has the potential to make your head spin — in a good way.

In 1995, Malik (gay actor Jeffrey Bowyer-Chapman) and his older lover Aaron (Ari Cohen) relocate from Chicago to small-town Illinois (where did they get those mountains?) for a necessary change. Moving along with them is Aaron's teenaged daughter Kayla (Jennifer Laporte).

Malik, who is on a variety of meds for his nerves, never got over the gay-bashing death of a lover —which we see in repeated flashbacks— from his youth. In other words, Malik is always on the edge and often teetering over. Therefore, it doesn't take much to set him off; odd looks from the townspeople, elderly neighbor Mr. Reinhart (Paul McGaffey) lingering on their property with a secret message for Malik, a ceremony he witnessed from his window, and the spec work he's doing for a conversion therapy champion.

By the time he uncovers the truth about the ritualistic murders that occur in Rusty Creek every ten years, or the demonic cult feeding its prized beast, he's basically lost his grip. Still, Malik's sane enough to carry out one last important act. Timely in many ways, including a message about it being unsafe "for people to stand out...in this country," the movie is another frightening case of the more things change, the more they stay the same.
(www.shudder.com) Rating: B

Rent-A-Pal, the debut by writer/director Jon Stevenson, takes us all the way back to 1990. The only thing missing from the wardrobe of 40-year-old, pleated khaki-pants-wearing, slicked-down-hair nerd David (Brian Landis Folkins) is a Members Only jacket. He drives a station wagon with fake wood paneling and is the full-time caregiver for his mother Lucille (Kathleen Brady). Lucille has dementia and frequently refers to David as Frank, her late jazz musician husband, who has been dead for ten years. 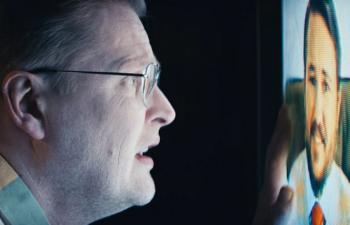 To alleviate some of his loneliness, David signs up with the pricey Video Rendezvous, a dating service that provides members with videotapes to find the perfect love match. During a visit to the Video Rendezvous office, where he updates his video profile, he rifles through a box of sale VHS tapes and comes upon the Rent-A-Pal video, which he purchases.

At home, in his mother's basement, David puts the Rent-A-Pal video into the VCR and Andy (Wil Wheaton) pops up on the screen. Andy is friendly and funny, and the way the video is created, it gives the viewer the impression they are actually having a conversation with Andy.

But soon enough things get dark. Andy, as it turns out, has a cruel and jealous side. This is displayed when David meets Lisa (Amy Rutledge) via Video Rendezvous. David, whose grip on reality was slipping even before he encountered Andy, soon begins the scary slide on his personal slippery slope.
(IFC Films/Pretty People Pictures) Rating: C+

You might be thinking, "If I never have to see another found-footage, shaky-camera horror flick, I'd be content for the rest of my days." But if you have to watch one more, you could do worse than Followed.

Opening with a claim that an anonymous user uploaded a screen recording from early November 2016 to social media websites, we watch Followed unfold on someone's computer screen; clever device that. 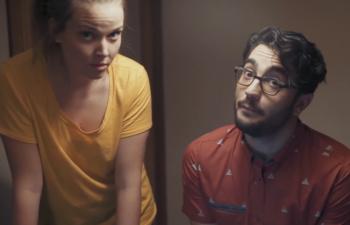 Mike (Matthew Solomon), a vlogger without a single redeemable characteristic, has made a minor name for himself as DropTheMike on his distasteful website where he posts "sick and twisted new videos" from tragic sights, such as Pasadena's Suicide Bridge.

His latest plan is to spend Halloween weekend at the haunted Hotel Lennox in downtown Los Angeles. He's not going alone, having coerced editor Nic (Caitlin Grace), sound person Dani (Sam Valentine), and the most reluctant of all, religious Christopher (Tim Drier) as his director of photography.

Not that Mike hasn't been warned against going. Wallace (John Savage), a haunted hotel historian who has written about the 123 murders or suicides at the Lennox, tries to discourage Mike, but to no avail. Jess (Kelsey Griswold), Mike's breadwinner fiancée is also less than thrilled, but she knows there's no stopping him.

Things get freaky soon after the foursome arrives and checks into the two rooms Mike reserved on the 14th floor. One of the rooms also happens to be where a notorious serial killer committed unspeakable acts. As if there is a limited pool of ideas from which to draw, Followed begins to pile on the scares (some predictable) including flickering lights, kids appearing in long corridors, a hacksaw-wielding killer, a woman jumping to her death from an upper floor, a chase involving a masked man, scary basements, a beheading, various apparitions, unexplained sounds and the revelation of Mike's true identity.
(Global View Entertainment) Rating: C+

When it comes to the world of drag, one thing on which everyone can agree is the inventiveness, the imagination, the originality of it all. But that hasn't stopped the Boulet Brothers from blatantly and unapologetically ripping off RuPaul's Drag Race for The Boulet Brothers' Dragula: Resurrection (Shudder). A more than two-hour long extension of the Brothers' Dragula competition series, focused on non-traditional horror drag (something we've already seen plenty of on Drag Race, with Yvie Oddly being one such example), this is horrifying in unintentional ways.

Seven former contestants — Kendra Onixx, Victoria Black, Priscilla Chambers, Loris, Frankie Doom, Saint and Dahli — from three previous Dragula seasons are given the chance to resurrect themselves, return to "the land of the living" and win $20k in the process. Each must take part in a grand Halloween showcase in which they demonstrate their skills at drag, filth, horror and glamour, via three looks and three distinctive floor shows. 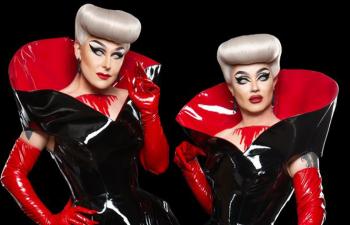 Closely following the Drag Race formula, the contestants are interviewed, shown designing and making their costumes, and spilling the tea on each other.

With the exception of a few powerful moments — Saint talking about the impact of the Black Lives Matter movement and Kendra's story about surviving a horrific accident — these aren't people you'd want to spend five minutes with, let alone two hours. Plus, the shoddy production values don't help in the least. Sashay away from this mess. Rating: D-