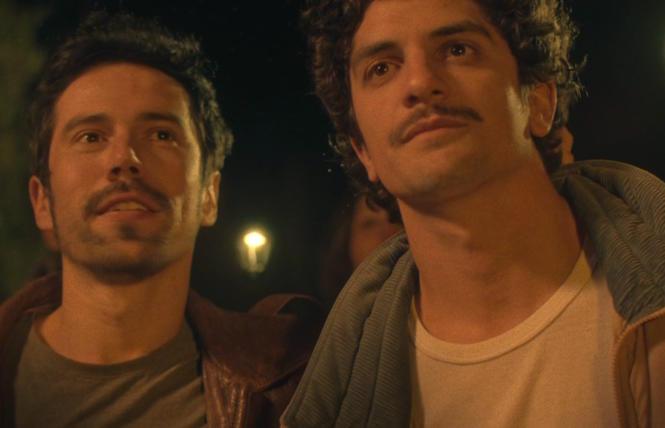 The Strong Ones (Los Fuertes), part of OutFest

Among the 160 films 35 world premieres, 10 North American premieres and 4 U.S. premieres as well as live concerts and conversations.

Among the international features, The Strong Ones (Los Fuertes) tells of a Chilean romance between two men, an architectural student and a fisherman, rivaling In God's Own Country for the sweetest recent male/male romance.

For kinky flair, Bloodsisters: Leather, Dykes and Sadomasochism brings light to sexual subcultures. And Dry Wind (Vento Seco) serves up a sizzling Brazilian spin on the men's leather scene, with romance emerging amid the fetish fun.

In documentaries, Cured recounts the 1970s struggle to have homosexuality removed as a 'mental illness.' Ahead of the Curve tells the epic take of the groundbreaking women's magazine. The Capote Tapes unveils decades-hidden gossip from interviews with Truman Capote.

And for Bay Areans, Nelly Queen: The Life and Times of José Sarria shares the iconic story of the local pioneer in drag and politics.

Romance, suspense, music performances and more will keep you watching this global array of cinematic treasures.

Along with web viewing, patrons can watch films on iPhone, AppleTV, Roku, Android TV and Fire TV applications. An all-access pass is $60.