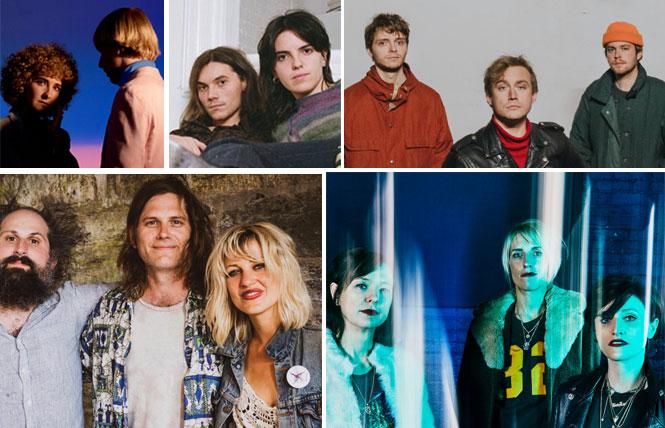 Social distancing can be a challenge if you are in a band. It probably gets somewhat easier for musical duos and (possibly) trios.

Tennis, married couple Alaina Moore and Patrick Riley, have a habit of social distancing when it comes to writing their songs on long boat trips as they are known to do. For two people in the habit of keeping their distance from other folks, the timeless pop songs on Swimmer (Mutually Detrimental/Thirty Tigers) have a universal appeal. The evocative and suitably titled opener "I'll Haunt You" lingers long after it ends. "Need Your Love" picks up the pace and then drops it like it's hot before picking it up again. "Echoes" sounds like a lost Jenny Lewis number while the title cut glides along beautifully. The island vibe of "Tender As A Tomb" is a cooling breeze and "Matrimony II" is simply gorgeous.

Depending on where you fall on the hipster scale, you may or may not remember NYC duo Eliza Barry Callahan and Jack Staffen of Purr from their former musical outing Jack + Eliza. If you haven't heard the pair's 2015 album Gentle Warnings, it's a good intro to the twosome. Like New (Anti-), released as the couple's latest musical incarnation, Purr maintains the psych-folk sound they've been crafting. There are also some pleasant surprises including "Giant Night," "Boy," "Avenue Bliss," "Wind," "Take You Back" and "Miss Youniverse."

You can hear the influence of Television and Devo on Atlanta-based Omni, made up of Frankie Broyles (former member of queer musician Bradford Cox's band Deerhunter) and Philip Frobos (formerly of Carnivores). The songs on its album Networker (Sub Pop), while angular and jerky, never feel derivative. On the contrary, to Omni's credit, songs such as "Courtesy Call," "Genuine Person," "Sincerely Yours," "Present Tense," "Flat Earth" and "Blunt Force" are of the moment and fresh.

It's nice to see that winning a 2019 Tony Award for her musical Hadestown has not distracted singer/songwriter Anaïs Mitchell from her love of singing and songwriting as demonstrated on the eponymous 37d03d Records debut by folky super-group Bonny Light Horsemen. Mitchell and her cohorts, Eric D. Johnson (of Fruit Bats) and Josh Kaufman, breathe new and exciting life into ancient folk ballads, giving them a spin that is as timeless as it is current. Even if this kind of thing isn't your bag, it's still an impressive show of force, especially on songs such as the title track, "The Roving," "Bright Morning Stars," "Deep In Love" and "Blackwaterside."

Mary Timony, of Helium and Wild Flag fame, now leads the all-female rock trio Ex Hex, which includes Betsy Wright and Laura Harris. It's Real (Merge), the threesome's new album, suggests a steady diet of classic, not alternative, rock. It's all about the guitars, bass and drums. The songs sound like they could have been written and recorded last year or 40 years ago. This is particularly true of "Diamond Drive," "Cosmic Cave," "No Reflection," "Rainbow Shiner" and "Radiate."