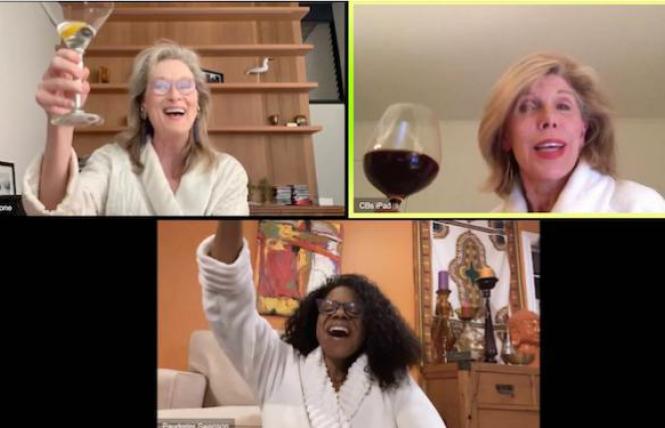 In a battle of simultaneous streaming events, GLAAD's Together in Pride: You are Not Alone and Broadway.com's Take Me to the World: A Sondheim 90th Birthday Celebration both won the war of fighting COVID-19 and supporting LGBT centers while raising hundreds of thousands of needed dollars amid the pandemic. The dual events also lifted viewers' spirits, particularly a spirits-gulping trio of "Ladies Who Lunch."

Obviously, both events had a strong LGBT viewership. But which one to watch?

In anticipation, the GLAAD event's cohost Billy Eichner tweeted, "Twitter gays debating whether to watch Sondheim or the GLAAD benefit while the vast majority of the world is like, 'Well, guess I'll get high and watch The Witcher again."

Fortunately both events can be viewed online, and donations continue to be accepted for both CenterLink (a consortium of LGBT centers) and Artists Striving To End Poverty (ASTEP). 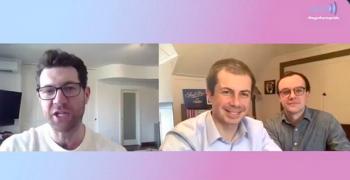 GLAAD to see you
Hosted by Billy Eichner and Lilly Singh, the GLAAD event raised funds more than $225,000 for CenterLink and its network of over 250 local community centers in the U.S. and around the world.

While the Sondheim event honored first responders and focused on aiding impoverished families, the GLAAD event's theme sought to undo the larger isolation LGBTQ adults and youth felt even before the pandemic, "all through the glamour of Zoom," joked Eichner.

In talking with Pete Buttegieg (with his husband Chasten) Eichner asked about the generational gap in responses to his presidential candidacy.

Said Buttegieg, "As a group that's still so close to the edge in terms of marginalization. T here's one generation that's astonished there can even be a candidate and they have the freedom to vote for a candidate who's queer. For others it may have been empowering to be able to be queer and not vote for a candidate who is queer. On some level I get that. I just hope that people can have whatever their political views are and not be mean. I don't believe we need to add any more meanness to this world." 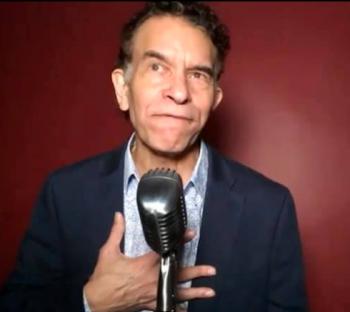 Curtain up, light the lights
The initial technical glitches had up to 40,000 viewers seeing a muted Raul Esparza and a repeated opening piano intro from Follies by composer Stephen Schwartz (Wicked, Godspell). But the delay only added to the drama and anticipation of the 90th birthday celebration of prolific gay composer and lyricist Stephen Sondheim, also the 50th anniversary of Company's opening night.

While tweet threads unspooled, and distanced pals shared volleys of texts, critiques mentioned a lack of songs from Gypsy or West Side Story (for which he only wrote lyrics). Despite those omissions, the concert lovingly focused mostly on ballads and mid-tempo songs, wisely chosen, as host Esparza said, by each of the performers, each with a subtly hinted contemporary context.

Lin-Manuel Miranda sang "Giants in the Sky" from Into the Woods, Josh Groban "Children Will Listen" from Into The Woods and Lea Salonga offered "Loving You" from Passion.

Laura Benanti's touching bathroom performance of "I Remember" from Evening Primrose led to some snarky comments about her showing off her "caulk" (hey, the acoustics were great), while others mocked the makeshift backgrounds in performer's homes.

Other numbers won nothing but praise, particularly Jake Gyllenhaal and Annaleigh Ashford (Oklahoma) in a duet of "Move On" from Sunday in the Park With George (Gyllenhaal starred in a recent restaging of that show).

Brian Stokes Mitchell's bravura rendition of "The Flag Song," cut from Assassins, brought forth political themes and took on a haunting contemporary angle, what with the singer-actor having only recently recovered from coronavirus.

Kids also made appearances, including Neil Patrick Harris' children, whose deadpanned response to his "Witch's Rap" (Into the Woods) made for a giggle.

Young Sheldon's Iain Armitage, previously known for his precocious Broadway reviews, shared a video of his years-back kitchen performance of "Finishing a Hat" from Sunday in the Park With George.

Before Linda Lavin sang the mildly kooky "The Boy From..." she noted that the song from The MAD Show was composed by Sondheim but credited under a nom de plume.

If the Tonys or Emmys decide to add new awards in context to today's struggles, Ann Harada, Austin Ku, Kelvin Moon Loh, and Thom Sesma's performance of "Someone in a Tree" from Pacific Overtures should win Best Use of a Zoom chat. 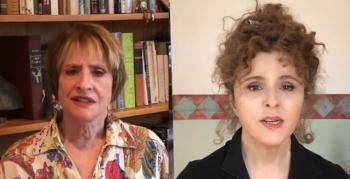 Of course, devoted show queens panted in anticipation for two musical theatre superstars, Patti LuPone and Bernadette Peters, who offered surprisingly subtle performances of "Anyone Can Whistle" (from the musical of the same title) and "No One Is Alone" (Into the Woods), respectively.

But the indisputable hit of the night was the faux-drunken trio of Meryl Streep, Audra McDonald, and Christine Baranski who sang "The Ladies Who Lunch" from Company in matching white bathrobes.

As Streep shook a martini shaker in rhythm, and the three drank and drank, the lyrics took on a zeitgeist tone, three booze-sipping women resenting the oblivious others outside with no concerns other than "optical art" and Mahler.

We'll drink to that.

Watch 'Together in Pride' at www.glaad.org

Watch 'Take Me to the World' at www.broadway.com