The San Francisco Drag King Contest will commemorate its 25th year on August 22with a rollicking show at Oasis. Drag king legend Fudgie Frottage will co-host the evening along with former presidential candidate, the fabulous Joan Jett Blakk. Mo B. Dick will make a special guest appearance as well as serve on the panel of celebrity judges, along with Leigh Crow, Jota Mercury, Fontaine Blue and the beloved icon Sister Roma, who will participate in the proceedings via Zoom. Over the years Sister Roma has been a mainstay of the contest.

"After I went to my first show I was hooked," Roma told the Bay Area Reporter. "Fudgie invited me to co-host which gave me the opportunity to really see how hard these Kings work and all of the humor, talent and passion they bring. Plus, it's a blast! I keep coming back because they keep inviting me. It's honestly one of my favorite gigs of the year."

Roma is delighted that the show is taking place at Oasis, which nearly went out of business during the COVID-19 lockdowns. But owner D'Arcy Drollinger found a number of creative ways to keep the club going, including staging an online telethon that raised more than $250,000.

"Oasis could not be a more appropriately named club," Roma said. "I am so glad that D'Arcy and her top-notch team rallied to find new ways like Oasis TV and Drag Queen Deliveries to keep the club open during 2020. After the success of the telethon, it's clear that the LGBTQ community around the globe recognizes the importance of this safe place, event space, cabaret, nightclub. It really is an Oasis for all of us."

Proceeds from the event will benefit PAWS (Pets Are Wonderful Support) and Rocket Dog Rescue.

"The Oasis is the best and D'Arcy Drollinger is a powerhouse genius to have kept the place operating all through the past year," added Fudgie Frottage. "The Oasis is the epitome of Queer Family, family with talent galore. I am very grateful for my Oasis family."

Frottage points out that the San Francisco Drag King Contest is the longest running contest of its kind. He noted that this year might have marked the 26th year of the contest had they not skipped last year. 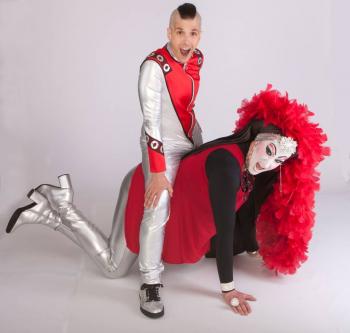 "To think that young kings have been inspired by the show and that many of us recently celebrated 25 years in the business with a Drag King legends show is amazing," he said. "It's an honor and to see how drag kings have evolved and are winning major drag king competitions like Dragula and Drag Queen of the year."

Frottage promises that a good time will be had by all. The show will follow a pageant format with an opening number. There will also be an all-star segment featuring past winners and title-holders, followed by the contest. To commemorate the contest's 25th anniversary there will be posters and videos from years past in the club before the show. Food will be provided by chef Xan DeVoss of Fox and Lion Bread.

"To sustain an event for 25 years is a heroic feat, and the SFDK is well known all over the globe," said Mo B Dick. "I applaud Fudgie Frottage's terrific promotional skills. He has worked tirelessly to produce a fantastic contest year after year. This certainly is drag king history at its finest."

Dick also spoke of why he keeps coming back to the contest: because they're fun, entertaining, and unpredictable.

"San Francisco has always had the wildest, wackiest, weirdest drag shows, so I look forward to the merriment every year," he said. "Cheers to SFDK 25 celebrating its silver jubilee."

Frottage wants to assure attendees that all safety protocols will be in place in order to maximize the safety of the kings and the audience. Proof of vaccination is required before entry, and everyone will be wearing masks. There will also be complimentary hand sanitizer available. The contest will also stream on Oasis TV for those who don't have proof of vaccination, or who might not be feeling up to an in-person event just yet.

"The audience can expect to be delighted and dazzled by loads and loads of talent," he said.

Sister Roma had her own unique way of describing the evening. "I can't say too much about Fudgie and Mo except that you haven't lived until you've been in the middle of a drag king sandwich," she said.