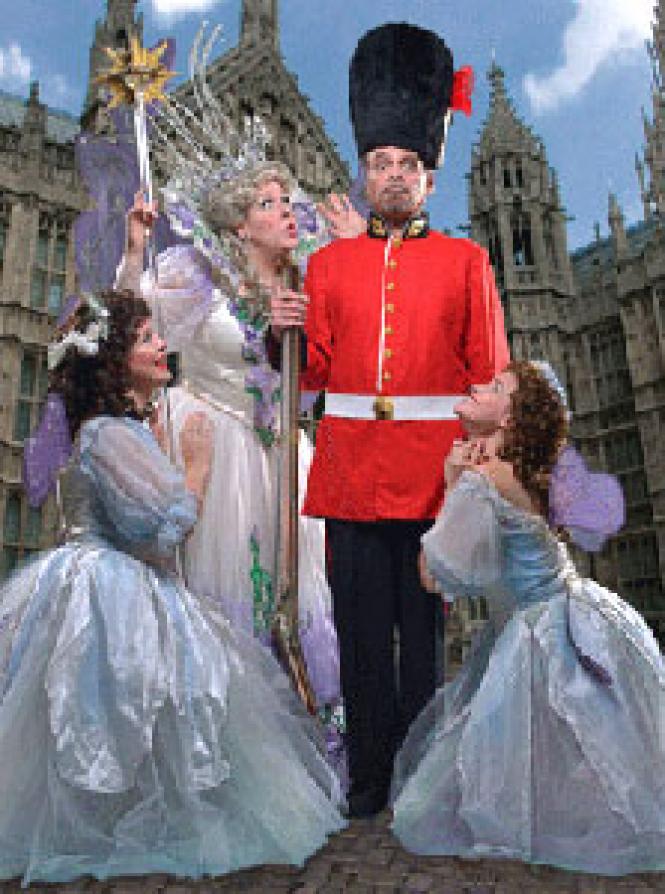 "Tripping hither, tripping thither,/We are dainty little fairies," sings the suitably attired chorus as they break poses in the decorous tableau that opens the Lamplighters Music Theatre's latest production of Gilbert & Sullivan's "Iolanthe, or The Peer and the Peri." For Lamplighters regulars and G&S fans, it is the happy start to another few hours of willing suspension of disbelief - unless you do believe in fairies - and immersion in a merry world of ridiculously complicated plot twists, hummable tunes, and biting social satire.

"Iolanthe" came at the midway point of the G&S partnership, and it has always been an outstanding crowd-pleaser, right up there with the big three - "The Mikado," "Pirates of Penzance" and "H.M.S. Pinafore" - beloved for its lovely and sophisticated music (more than a few appropriate echoes of Mendelssohn), tongue-twisting patter songs, and spot-on skewering of the British class system.

The most recent Lamplighters opening night, at the Lesher Center in Walnut Creek, was off to a good start the moment veteran Music Director/Conductor Baker Peeples entered the pit. His years of shaping the orchestra's sound and his unerring sense of timing give a unique stamp of confidence and tradition to every production he leads. And tradition is what the company is all about. There is never any condescension to the material, and hardly any unnecessary updating with the more unavoidably obscure lines. There is a glossary in every program, so there is no reason to explain what a "bathing machine" is. Why, a horse-drawn vehicle used as a dressing room for modest bathers at the beach, of course!

The sets and costumes are always old-fashioned in the best and sturdiest sense. Prettily painted prosceniums and backdrops and sumptuously detailed costumes are the hallmarks of every Lamplighters show. But the most important guarantee the company gives is a professional and loving rendition of the beautiful score. Comic timing and appropriately Victorian-style acting are vital as well, but there is no messing with the music, on that you can rely.

This latest incarnation of the story of a boy who is half-fairy (on his mother's side) and mortal from the waist down (thanks, Dad) is dispatched with typical glee by alternating casts that included, on opening night, a newcomer to the troupe, tenor Samuel Rabinowitz as young Strephon (the crazy, mixed-up son of banished fairy Iolanthe, and lovelorn suitor of a mortal girl). His bright and tightly controlled voice is not too full-bodied, but he has a pleasing sound, and his acting and appearance serve him well. His G&S career and growing repertoire look promising.

As his mother Iolanthe (kicked out of the fairies for marrying a mortal, the Lord Chancellor, no less!), Michele Schroeder was lovely and amusing, even if her role is more of a plot device than central heroine. She also showed a delightfully droll wit in her line readings.

Funnier still was the Queen of the Fairies, as relished every minute by Cary Ann Rosko. Ms. Rosko has tickled us in other Lamplighters productions, but she was clearly having a special romp with this large and characterful assignment. Alexandra Sessler was Phyllis (wooed by Strephon), an Arcadian Shepherdess and Ward in Chancery (take my word for it, you don't need to know). She looked just right, and sang with saucy confidence. Her acting was also good, but a little slowing down might correct some diction issues. We could catch most of what she was saying, but only just.

The Lord Chancellor gets one of the best and strangest patter songs in all of Gilbert & Sullivan with the daunting "Love, Unrequited, Robs Me of my Rest," and another company veteran, F. Lawrence Ewing, showed he has no problems with diction at all. His pompous portrayal had just enough vulnerability to make him likable, and Ewing's singing voice remains strong.

Other stand-outs in the excellent ensemble were the three main fairies: Stephanie Dietz as Celia, Katelynn Neumann as Leila, and Heather Tinling as Fleta. They not only looked quite fetching, but also displayed very pretty voices and some funny comic timing.

A run-down of the plot is pointless, as with all of G&S. You really have to be there. It doesn't hurt if you appreciate English humor going in, ranging from very dry satire to knock-about farce. The stories aren't intended to make a lot of sense, and Iolanthe is especially whimsical, to say the very least. Just sit back and enjoy the expertly performed tunes, gorgeous orchestral work, and good-natured sarcasm of the new Lamplighters rendition, and you'll understand well enough. When the fairies join with the mortals of Parliament in the Act Two Finale, everyone sprouts a pair of fairy wings. Who needs an explanation for that?