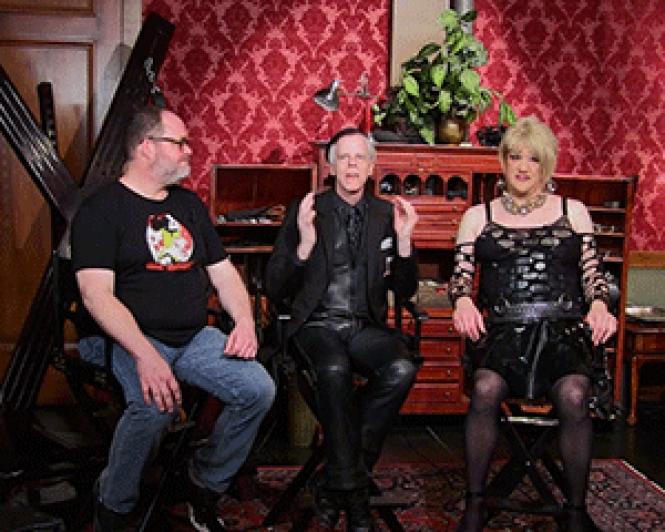 Dan Karoska, guest Danarama, Director of Kink University, and Maria Konner at The Armory's salon for a taping of 'Under the Golden Gate'

The next taping of "Under the Golden Gate" takes place on Friday, April 24 at 8pm in the Armory's Edwardian Suite.

"Our shows at Kink.com are free to the public, but we do ask for a $5-10 donation to help us cover expenses," said co-host and co-producer Dan Karkoska, aka DJ Dank. "We might start charging in the future, but we want as many people to come as possible."

DJ Dank, Karkoska's alter ego, has become a fixture in the queer club scene. He began spinning around eight years ago at The Cinch, where he was part of Charm Pop and Candyland. Other venues include Toolbox, a drag show at Club 93, Show/Off, a drag show at Truck, and Bloke, a British music night at Truck.

Karkoska recalled how he got into club music.

"There was a Goth night called Revolver at The Cinch," he said. "My boyfriend at the time asked to DJ. As I watched him do it, I decided that I wanted to try it." He asked Cinch manager Eric Berchtold if he could and started soon after.

"Eric just handed the show over to us," Karkoska said. "My ex is David Hawkins, a.k.a. DJ Dingbat. We DJ'd at The Cinch for two years."

Karkoska said that Under the Golden Gate is produced as though it were a TV variety show.

"We slate the scenes, yell 'cut', stuff like that," Karkoska said. "The audience gets to meet interesting people, hang out at Kink.com and have a drink at the bar. It's a great experience."

Guests for the April 24 taping include political veteran and gay comic Tom Ammiano, Jane Wiedlin of the Go-Gos, and musical group The Ethel Merman Experience. Karkoska said that the show would continue taping at Kink.com for as long as they can. Episodes can be viewed online.

"Our idea is to become The Tonight Show of San Francisco," Karkoska said. "Every major city has a self-reflective TV show to talk about current events and to interview celebrities and people of note, so why not us! No one else is doing it. We are using top-notch equipment, so we are catching modern San Francisco history with three cameras, including a steadicam, and professional sound. No one else is doing what we're doing."

Karkoska said that the show taped its earlier episodes in the home of co-producer Maria Konner, who currently finances the show with the help of her tech salary. They were also heard on Mutiny Radio.

Konner is a drag queen, but she's not what viewers might expect.

"I identify as a natural straight-curious person who lives in a queer world," Konner, who declined to reveal her male identity. "I'm not normal. Normal by definition is average, middle of the bell curve, which in this world means being put into a male versus female box by our advertising-driven culture."

Konner's sexual identity is fluid and ever changing, she says.

"I'm straight when I'm a man, I'm more bi when I'm a woman," she explained. "I'm highly accepting of all forms of sexuality. But for me personally, when it comes to sex, there simply has to be a woman in there somewhere, even if it's me."

Konner describes herself as a New York Jew who came to San Francisco twenty years ago. She is currently divorced from a woman, and started doing drag for Halloween.

"I had no intention of performing, but I got pulled up to the piano at Martuni's by other trans women," she said.

Konner said that she has an engineering degree, and an MBA from Carnegie Mellon University. "While at the business school I spent a lot of time at the College of Fine Arts next door playing music and putting together shows about the ironies of business and politics; using art to deliver important messages."

It all led to the creation of Under the Golden Gate three years ago. She says it's a classic male-plus-female job. "The male needs to keep everything extremely efficient and Maria is the performer," she explained. "She's the delivery mechanism, and a face."

"We are currently looking for sponsors and for some kind of money to come in and help take our show to a larger audience," Karkoska said. He explained how Kink.com came into their lives.

"We had done a multipart, behind the scenes piece on Kink.com that was super-popular, as well as a behind-the-scenes for Naked Kombat with Sebastian Keys, so he helped us get the Edwardian Suite on the fourth floor of Kink.com's empire inside the SF Armory," Karkoska recalled.

Kink has worked out well for the show.

"It's a great fit," Karkoska said. "We love the ambiance of the room, the people there are awesome to work with, and since Maria is a big fan of Kink, we work kink demonstrations into the show."

Karkoska likened Kink.com to what the Playboy Club had been to the "swinging bachelor pad" crowd during the 1960s. "It's a great way to lure guests because they want to tour the facility and experience what Kink.com is like," he said.

"In the future, we would love to have Armistead Maupin, DJ Shadow and John Waters, among many, on the show to talk about modern day San Francisco and to tell their own stories," Karkoska said.


If you'd like to attend the April 24 taping of Under the Golden Gate at The Armory, just show up. The Armory is at 14th and Mission. Doors open at 7pm. For information on past and future episodes, tapings, sponsorship, or booking, please visit www.underthegoldengate.com