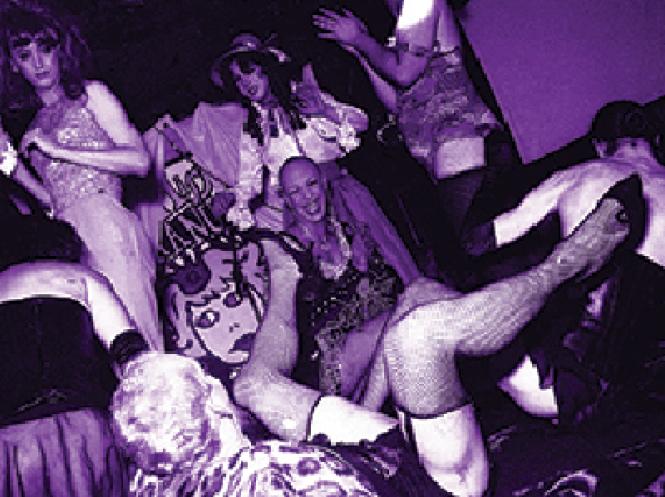 Chaos on stage at Club Uranus in April 1994  (Source:Rick Gerharter)

In the late 1980s and early '90s, a series of clubs in San Francisco were unlike any others that I had ever seen. Run by DJs Michael Blue and Lewis Walden, they were anarchic, fun, crazy mixed gender clubs that caused controversy during their existence and mixed high and low culture.

Club Chaos (at the Crystal Pistol on 842 Valencia Street) , Club Screw (495 14th Street) and most of all Club Uranus at the End-up (6th and Harrison) both raised and lowered the bar for dance spaces that followed. They served as psychic grandparents of a spirit that inspired events like Trannyshack and continues to this day at clubs like Oasis.

"All the bars in town, at least the ones I like, are fronts for heretical sects. The Lizard Club is Manichean. Club Chaos, Arian. Club Uranus is Apollinarian, and Screw-well, it's rumored to be the last holdout of the Borborites. DJs there play music espousing their club's theology or they're exiled to Brisbane, where even the gecko's love song is frowned upon." - Steve Abbott, The Lizard Club

The following week, the first Miss Uranus contest was held, judged by SF Examiner art critic David Bonetti, "On Our Backs" editor Susie Bright, and an S.F. Arts Commission Gallery Director. That first contest was emceed by Ggreg Taylor and Jerome Caja, and included contestants such as Imina Fog, Miss Amphibia from Titania, and the contest winner DeDe Astor, who told Ford in a post-contest interview, "I'm looking to marry a Republican golfer" and "I'm going to J'Rome's to try on outfits."

The J'Rome in question was the artist Jerome Caja who was part of a crew of local luminaries who visited Uranus on a weekly basis. Along with Jerome were artists such as Trauma Flintstone (Joe Wicht), Diet Popstitute, Pussy Tourette and Elvis Herselvis (Leigh Crowe).

I asked doorman for Club Chaos and Uranus Thomas Maffei about whether this was due to Uranus and Chaos being the "house bar" for activists from Queer Nation and ACT-UP.

He said, "Yes, but you should keep in mind that people from Electric City (the local LGBT cable show) and Boy and Girl with Arms Akimbo also were regulars."

Jerome talked about his performances at Uranus with Paul Karlstrom of the Smithsonian's Archives of American Art:

"I would dance on the bar. Usually though, I didn't dance; I was wrestling with someone...I always loved wrestling and I think I did more wrestling than dancing. When I'm in drag I want to interact...when I was a gogo dancer...it was always traditional that I would be the last one because I had a tendency to destroy things. They made, like, cages and things and I'd always destroy them."

Maffei confirmed this: "I made a gogo cage from electrical tape every week, because he'd destroy it weekly."

Regarding Jerome, he said, "He was an incorrigible flirt and one of the freest spirits I ever knew."

Some of Jerome's performances were particularly complex. One Easter weekend, Jerome re-enacted the Passion story, complete with crucifixion and resurrection from a cardboard coffin.

Of course some seemed somewhat random as well. I recall on one particular evening ordering a drink while Jerome and Elvis Herselvis simulated sex on the bar in front of me.

One of the more interesting aspects of Club Uranus was the gender balance there.

Lily Braindrop noted this in an article in the B.A.R. in 1990: "Mike and Lewis divulged that the mixed crowd at their clubs was no accident. Firmly maintaining that mixed gender equals more fun, they take great pains to promote their clubs among both men and women of the gay community."

Maffei confirmed this as well: "I did my best to let in as many women as men."

And for straight guys coming to ogle lesbians, he had a strategy as well.

"I'd tell the bros that they could get in if they would kiss their buddy on the lips. If they wouldn't, they weren't getting in."

The letters flew up and back for two months and defenders of the Uranus float included the playwright Robert Chesley who said, "Congratulations and heartfelt thanks to those brave people in the Gay Pride Parade who risked total nudity. They gave us the simplest and most elegant demonstration that the body is beautiful and no parts of it are dirty or shameful."

Uranus did indeed contribute to the beauty of the community. The Eros show at the Art Lick Gallery (which was at 4147 19th Street) featured a nude of Michael Blue photographed by Daniel Nicoletta (and he performed at the opening) and Jerome had a solo show there entitled Jerome's Compact in 1990.

But it wasn't always about beauty and art. At the Miss Uranus contest in March 1992, an incident occurred which would once again put the club in the letters pages of the B.A.R.

Justin Bond (then writing for the B.A.R.) had a different perspective.

"You think you've got it bad, but what about Mr. BoBo, the hapless hamster? Your wounds will heal, but that little varmint is probably emotionally scarred for life."

In September of 1990, the building that housed Club Screw burned. Uranus kept going through 1994.

Club Uranus, Chaos and Screw were truly emblematic of their time, a time when we didn't know who among us would make it to the next year or the next month. Times like this tend to make performance (and the need to have fun) more extreme. And many took inspiration from the club. Heklina first performed under that name at the Miss Uranus pageant.

Phatima Rude told the Bay Guardian, "I walked into that place and knew I had found my family; I had finally found my freaks."

For those of us who were there, it is fondly remembered and truly missed.