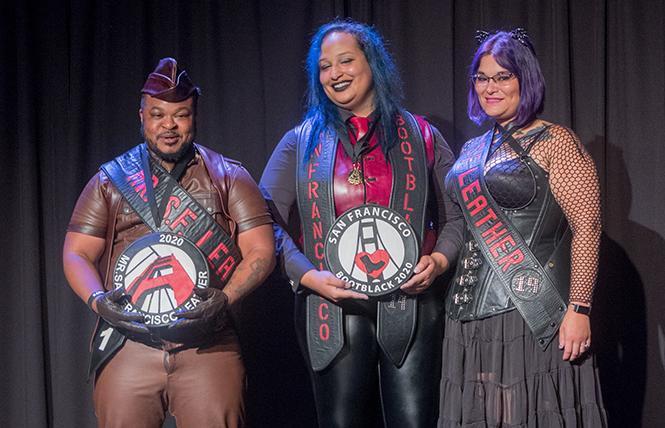 The Mr. San Francisco Leather and San Francisco Bootblack 2020 contest took place this past weekend. You might be thinking "Didn't we just have this contest in March?" You would be correct. That was for the 2019 titleholders.

The producer, San Francisco Bay Area Leather Alliance, felt there were compelling reasons to move the date. As a result, we have two of the same contests but for different years in the same year.

In 2018, the timing of the contest as it relates to the International Mr. Leather (IML) contest began being discussed within the Alliance. It was decided that whoever won Mr. SF Leather 2019 would have the option of competing at IML right away or wait until after their step-down and compete for IML in May 2020.

Jawn Marques, Mr. SF Leather 2019, decided to compete at IML last May where he placed an impressive First Runner-Up. Therefore, the Alliance moved the contest for the 2020 titleholder year.

The main reasoning for this change was to give the current Mr. SF Leather more time to focus on involvement in his local community. The change also allows for preparations to compete at IML over an eight-month rather than two-month period. Going forward, the contest (it's really two contests running in parallel) will happen on the third weekend of August. 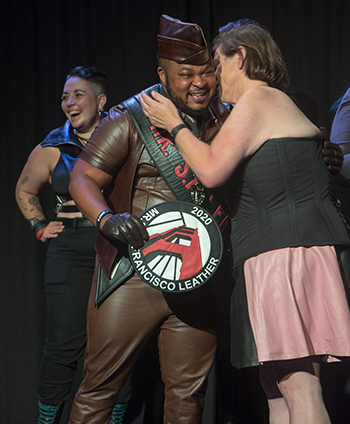 Vying for the SF Bootblack title were Unicorn boy and Jessie.

On Saturday the contestant interviews took place earlier in the day. That night was the main contest held at a new venue, Folsom Street Foundry. I like the new venue.
Emceeing this year were local leatherman Lance Holman and entertainer Alotta Boutté. Alotta also sang the national anthem to begin the show and then belted out a couple of great numbers at the halfway point.

The main show's components were what I refer to as leather presentation where the contestants try to confidently strut their best kinky self on stage while also answering a pop question, and the speech portion where contestants deliver a speech to the audience on any topic of their choosing.

Everyone looked great on stage, carried themselves well, answered the pop questions without any faux pas, and delivered good speeches.

Spencer Adam won the Leather Heart Award, an honor voted on by all the contestants to highlight the person who most had their backs during the competition.

Winner of Mr. SF Leather 2020 was Trey Onyx. Trey was the first out trans man in U.S. military service during the "Don't Ask, Don't Tell" era and is the first trans man to win Mr. SF Leather. As both a trans man and person of color, he will lend a voice to broadening the participation of both in the wider leather and kink scenes.

On Sunday the contest weekend ended at Sunday Streets SoMa with a gathering at the Leather Hub, the street section of the event organized by the Leather and LGBTQ Cultural District.

I hesitate to add this next comment because it will seem like I'm pointing specifically to this contest, but I've been meaning to offer this observation for years about the countless contests I've attended, and my mention just happens to sync with this one.

When possible, I believe audiences would appreciate if the biographies that are typically read from the stage were shortened dramatically, and that goes for everyone from contestants to judges to producers. Perhaps implementing a strict word limit would help.

Or, maybe even better —since so many contests now utilize projected slideshows during the contest— create a photo and concise information slide about each contestant, judge, emcee, producer or staff member that the contest wants to highlight and rotate their projection throughout the event. This would also ensure that people coming to the contest late, or who left the room to get a drink or take a bathroom break, still learned about each person.

Again, this pertains to virtually all contests nationally, although at least one contest I've attended recently has adopted this slideshow concept and it worked extremely well.

Congratulations to Trey and Jessie. May you have wonderful title years.

The Mr. SF Leather and SF Bootblack 2021 titleholder contest will be held the third weekend of August 2020. Check out the Alliance website in the future for details. www.leatheralliance.org