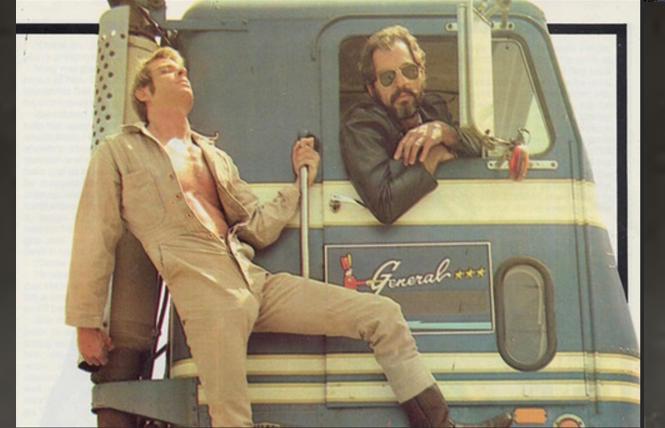 Later, to a critical letter in 1981, Paul responded "We are well aware of the neo-puritanism that has sprung up in recent years. It costs us readers as well as high-toned advertisers. But then the B.A.R. never set out to be the Christian Science Monitor of the gay press. We are what we are and who we are." 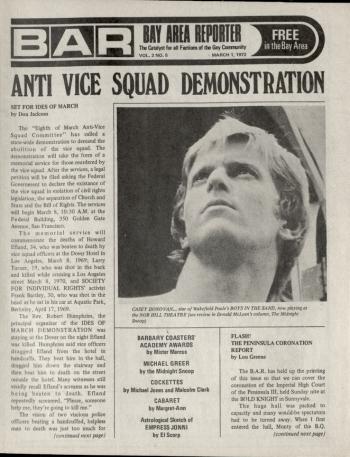 Casey Donovan, featured in the May 1972 Bay Area Reporter

Explosion of big talents
It was an auspicious time for me to begin. The 1970s saw an explosion of creativity since unequaled, especially by the rote-porn formulas of today's mainstream directors. Back then, original songs frequently graced soundtracks, editing technique could mirror Hollywood.

Wakefield Poole launched it all in 1972 with Boys in the Sand, which delivered porn's first superstar, Casey Donovan (Don McLean's review, March 1, 1972; 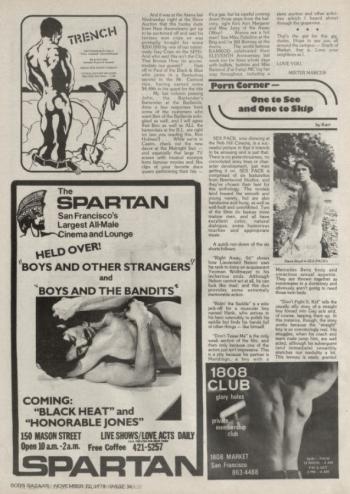 In 1972, Fred Halstead made his absolutely transgressive L.A. Plays Itself, which I called "an assault on the senses that has made me physically ill both times I've seen it." Despite my reaction, the important thing was its attempt to be more than loops.

In 1976, the Gage Brothers launched an iconic trilogy with Kansas City Trucking Co. Wow. It had hetero elements, like a voyeuristic woman who was a complement to the movie (not the insult dumped on us with tedious regularity at men.com). Its extreme scene of water sports was filmed with accomplished camera and editing techniques, multiple angels and intercuts "orchestrated into an eruption symphony."

an ad in the B.A.R. for 'Kansas City Trucking Co.'

And it had Jack Wrangler's manic impersonation of manhood, juxtaposed with the imperturbable masculinity of Richard Locke, who became the grand Daddy of his generation. He was a giant, robust, furred and bearded hunk; I idolized that guy. What a sweetie. His stage act was a thrill, in which he shot his load on a musical cue! When I asked him how he managed that feat (which he accomplished several times a day), he modestly demurred, "It's easy. You just get it there and hold on 'til your cue." 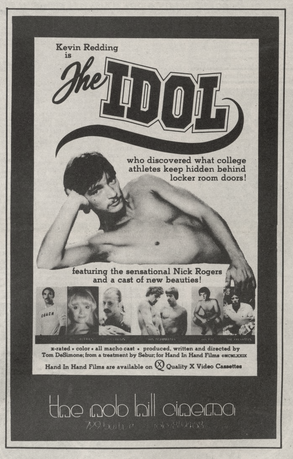 Sex Ed teachers
The 1980s found the B.A.R. being distributed in boxes on the streets. This gave easy access to minors and meant I had to start censoring the all-nude photos I'd been running. Too, too bad. More than that, the '80s were all about VHS and AIDS. Video led to a near jettisoning of craft.

For me, that ditched a lot of the thrill. Certainly, the stars of the day were consolation; Al Parker and Peter Berlin, and Scorpio, a sui generis, taciturn performer who seemed to live way out on the edges. I was mad for J.W. King. I still am. His lovely toned body and desirably stiff dick were trumped by the near obscene color of his lips, which monopolized my eyes. In one movie, he plays a Sex Ed teacher who decides to give life to the chalked depictions of an erection on the blackboard. They guy sure know how to encourage learning!

I had a keen interest in renegade filmmaker Christopher Rage. His work was fragmented and insular; its ritualized behavior was an excessive and bizarre reaction to AIDS. Fucked Up is perhaps the least representative of his films, and my favorite. It arouses and terrorizes me. It's an hour of Casey Donavan getting massively dildoed and fisted by a guy who looks like his older brother.

Far less extreme is a real novelty in all of porndom, Rage's 4X. He splits the screen in four not always equal and not always ordered sections. Sounds unwatchable, huh? Yet I find that its multitude of images can become a libidinous wash of desire. The varied snippets include most of Rage's stars, with action that comes and goes in no coherent sequence. Sometimes all four screens are used, sometimes not. 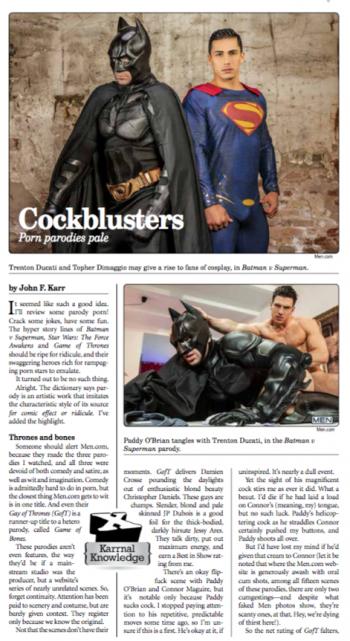 My first infatuation of the aughts was Brent Corrigan, with his sylph's body and creamy marzipan cock. It stands up, and he holds up. Then there was Avi Dar, oy, so handsome, a successor in type to hefty and hung Carlos Morales. I sure love 'em thick. I could rave about many others, but, hey, I'm running out of space.

And while I've liked the blandishments of mainstream porn, with its steady diet of attractive but interchangeable mannequins, some years ago it all started to blur together for me. Now I prefer the unknown byways. The Internet is just full of fascinating stuff. Not a place to look for craft, perhaps, but a place where the kicks don't seem so planned. It's where you can find smooth and lengthily-hung gold diggers like Reno Gold; it's where I found Archer Croft. He slays me. He's the renegade as cutie, with a cock-of-the-walk attitude, and street smart yet prettified looks. His long hair flows with an abandon he shares, and his cockring's a strangulator.

Ah, there have been so many boys, so many decades. The B.A.R. has always been a refuge for me. I was interviewed once for a position at a major publication. I fled right back to the B.A.R. Outside of the B.A.R., there are heterosexuals all over the place; definitely a foreign country. They do things so differently there. I only wanna write gay. So, long wave the B.A.R.