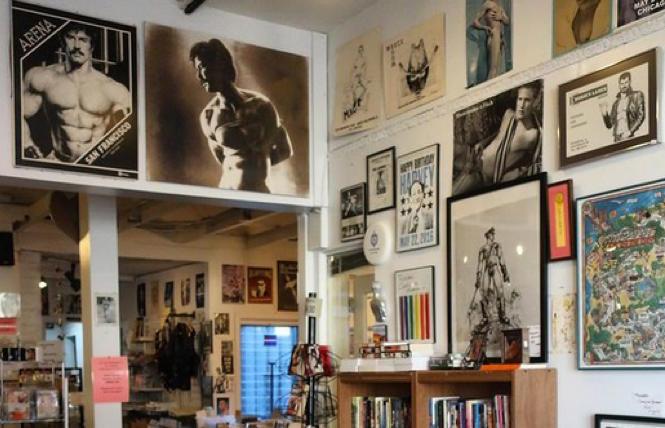 As Castro district businesses endure the pandemic, while some have closed permanently, one unique store has gained support from a devoted fan. AutoErotica, the longtime resource for vintage gay-themed sexy collectibles, has already raised more than $11,000 of its $16,000 fundraiser goal.

"When I first started, this was basically a sex toy store," said Batt, 74, in an interview with the Bay Area Reporter at his shop. "Then, other sex toy stores opened in the neighborhood. I had put magazines in the front room before that time, and it occurred to me that maybe I should do more with collectible and historic memorabilia. It was a good thing, because now I'm the last man standing in the country doing this kind of thing. As a result, people visiting from around the country come by, before COVID, to seek out items. So, what was a survival move turned out to be a very good move, in the big picture." 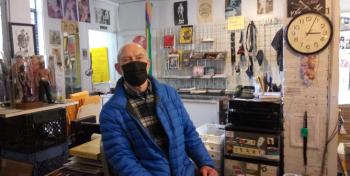 During the initial full lockdown of the pandemic, Batt spent those months organizing his stock, in preparation for re-opening, by refining his inventory. "I discovered treasures that I didn't know I had," he said.

Batt worked at Drummer magazine in 1981-82, formatting the personals ad, among other duties. Before moving to San Francisco, he also worked in the Chicago gay and leather communities. For a time, he managed the Gold Coast bar in 1978 and '79, and also started the first International Mr. Leather contest. Around that time, he started saving bar posters. "I tend to collect stuff."

"Back in the days, I would buy anything," said Batt. "But I soon discovered that some don't sell, like Men magazine; common as dirt. I sell them for two bucks now."

Understandably, older periodicals and magazines do better, "stuff from the '60s and early '70s," said Batt. "Physique Pictorials; they're getting harder to find, and as a result, prices have gone through the roof on those. Drummer has picked up, because it's no longer around, in its original form. It's been reconstituted as a quarterly. The original's a snapshot of old San Francisco."

So along with being a store, it's also an archival resource.

"AutoErotica, gay-owned and operated, located in the heart of the world-famous Castro district, is both a living museum of LGBTQ history as well as a retail shop selling items of interest to those interested in saving that history," wrote fundraising organizer Bradley Roberge.

"I was visiting a lot," said Roberge in an interview at the shop. "It's been kind of a happy place for me. Patrick and I started chatting. It was always so slow in here, and I just had a feeling he could use some help."

Roberge set up the fundraiser, and has spruced up the shop's Instagram account with a series of photos of items on sale. Roberge is a currently unemployed event photographer.

Along with paying for six months' rent, the fundraiser's helped Batt pay off his advertising account with the Bay Area Reporter. Additional costs include smaller fundraising fees. Because his business was deemed 'adult entertainment,' Batt was denied small business relief funds. He also had his long-running eBay account cancelled in 2018, with no explanation.

Batt noted that sales and visits have increased since Roberge started the fundraiser. He says that tourists comprise many of his visitors. "Before the pandemic, there would be people from New York and LA every day," said Batt. Now, he said, locals itching to shop and go out safely are rediscovering the store.

So, another way fans can support AutoErotica, of course, is to shop there. Batt said that some of his store's most popular items are framed and unframed vintage bar and leather event posters. Other items include commemorative event pins, sexy books, magazines and adult DVDs. 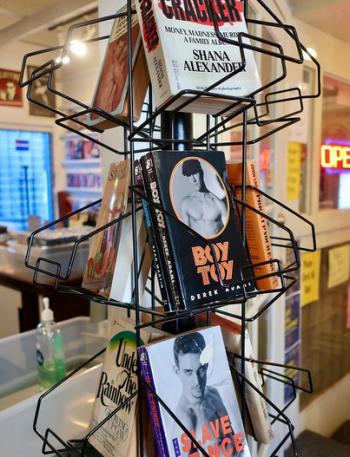 One would think that in an era of digital downloads that fans would not be interested in print adult media. Yet, as Batt explained, new fans show up every day.

Also, he added, "Younger people are fascinated by the classifieds in Drummer. They say, 'I can't believe people put all this information in a magazine ad,' and I look at them and say, 'Do you have a Grindr profile?' Back in the day, the only outlet people had was a classified ad."

Another way to show support for AutoErotica is to donate items. "Anything that's older or collectible is worth considering," he said. "If it's gay, it's part of our history."
But please; no old VHS tapes. That's one form of media that's past its prime.

Batt noted an amusing frequent occurrence at his store. "Younger guys will ask for 'vintage' items, which to them are the 1990s, but to me that was last week. It makes the job interesting. It's nice to see how many people don't want to see this kind of place to go away. That's refreshing, because for me it's a labor of love." 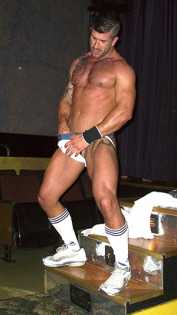