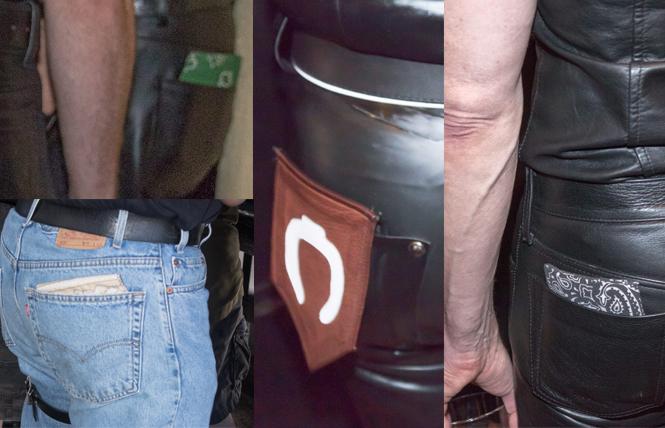 Various hankies in various back pockets. Who's a top? A bottom? Versatile? Photos: Rich Stadtmiller

The following sentence jumped out at me when I first read it, and that resonates even more today in our current sexual culture environment:

"Is it any wonder that the top men are so temperamental, so vulnerable, seeing that so much is expected of them and that almost the entire success of an arrangement depends upon them?"

The Real Thing by William Carney is a well-known novel with early gay leathermen characters.

Some will take exception to that quotation. Arguments that 'It takes two to tango' can rightly be made. Without those who bottom someone who tops can't exactly do much.

However, although this is a work of fiction, the quotation aptly expresses the sentiment that often in the sexual partnering contract there's an assumption that the top or dom will be the sole conductor of the experience with the bottom or sub simply going along for the ride.

I don't believe that anyone 'should' be any one thing sexually: top, bottom, versatile, dom, sub, switch, or whatever. Self-determination reigns as king with me and everyone gets to decide how their own sexuality manifests.

One significant source of the current hyper-focus on positions and roles is the result of the 'databasing' of our sexuality. Before online hookup profiles, everyone had to have discussions to establish those sorts of parameters. Now we just look at a few fields in a profile and assume we know all we need to know about the person. We don't.

Perhaps due to the nature of leather and kink and the power dynamics sometimes employed during play and within relationships, the diminution of those who play as subs unfolds as a natural expression of the specific fantasies involved. That's fair and even useful, in small doses. But when such an attitude carries over into the larger communal and social realm, that's where things can become problematic.

Who's the top? Can you read the hanky codes?

View from a top, and a bottom

One of the advantages of being older, especially having come out into gay and sexual culture quite young, is that you get to see the long arc of change for many things. We increasingly emphasize sexual positions and roles as self-defining and sorting mechanisms to the point that we too often exclude perfectly good sexual and relationship partners because they don't fit such self-imposed identity boxes.

My fear is that all of this can generate a potential disconnect and dissatisfaction with sex because of top/bottom dyadic thinking rather than something more collaborative. Viewing tops as being responsible for the success of encounters also engenders an inequality and fosters the idiotic notion of top is better than bottom. For example, how often in the gay men's communities do you hear snide swipes or jokes about someone being a bottom as if that's somehow "less than" being a top.

There are other disadvantages to this mindset as well. In riskier scenarios it can lead to technical mistakes because it's assumed tops know it all and the bottoms don't need to participate with any in-depth understanding of what's transpiring.

Bad idea; anyone who plays on the bottom or sub end of the spectrum should have a working knowledge of how good encounters happen, be they of the vanilla or kinky variety.

Placing so much pressure on tops and doms to always produce a stellar encounter can result in tops feeling highly vulnerable and insecure. No top can be sure they'll always perform to a bottom's often unrealistic expectations.

One can crush the ego of a top rather easily. I've seen a top's ego crushed with a few harsh words from a mean-spirited or clueless bottom:

'The last guy didn't flog me that way.' 'You better stay hard.' 'You say you're versatile, but does that mean you're going to go bottom instead of topping me?' 'I'm a 'real' slave and you better be a real Master.' The list of tone-deaf comments like this could fill volumes. We hear them all the time.

So, let's try to keep the positions and roles we enjoy within the confines of actual sex and relationships and not let them trickle out into the general sexual culture ether. Whether you're a leather or kink-identified person, or you're of the more vanilla variety, let's make sex of all stripes true partnerships and keep the rigid position and role constructs inside our bedrooms and playrooms.