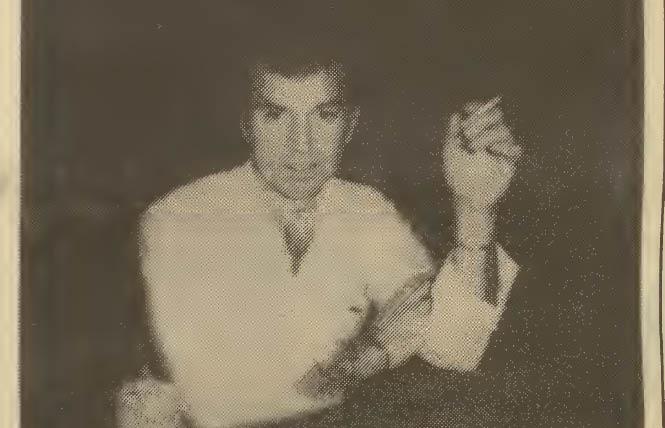 Chuck Kuhlke envisions a world where a lady can wear diamonds and pearls to Harlem . . . even if she isn't a tramp!

Known to many as "Chuck of Montclair," Chuck Kuhlke earned that title as a hairdresser in the Montclair area of Oakland. A native of Saginaw, Michigan, Chuck has spent the last 17 of his 37 years in the Bay Area.

This newest owner of a Gay bar in Oakland, whose hobby is oil painting, is now affectionately known as "Big Chuck" (probably based on his height!). I spent an enjoyable hour (or two!) interviewing him at his home base, Berry's.

Nez: How has the Gay community changed over the last 17 years?

Chuck: To me, it seems that the more we are identified, the more freedom we experience . . . but I have to admit, it seemed to be more fun when we weren't so identifiable. It's almost becoming too open, and with that openness, there seems to be less unity. Years back it was more like a hidden society ... we had to stick together to preserve our "secret." Of course there were many, just as today, who wouldn't admit to being Gay in public, so the bars were really the only social gathering places. And, we developed our own "language" and it was fun knowing something about ourselves that the "outside world" didn't know. I remember some really good times at such places as Berry's (of course!), Carnation, Club 7, Music Box, the original Jubilee .. . there really was more of a cohesiveness in those days, including both men and women!

Nez: Why buy a bar, and especially a Gay bar?

Chuck: This bar is like my second home. I used to work here for Snooks, six years' worth, and she taught me a lot about the business. I've always wanted a business of my own, and I wanted to make a bar different from any other bar ... I still do. I want to make it "arty" ... a place where the hoi polloi, the rich, the "hippies," the rank and file, the sophisticated, the common . . . everybody! If one is familiar with Bougis Street in Singapore . . . that's what I have in mind for Berry's. I know several "pinstripe suit types" from the Claremont Hotel, but I don't want them here . . . yet! The same with people I know from the gyms around here, and lots and lots of my ex-customers from the beauty shop . . . they have all expressed a desire to visit the bar, and they know I'm Gay and the bar is Gay, but I'm not ready and the bar is not ready . . . YET!

Chuck: I was in court reporting school, finishing my second year, when an opportunity to buy a bar came about. It was Lancers, but the deal fell through, and then Berry's was available. I wanted a bar and I wanted the schooling, but I couldn't do both. My fond memories of the past about Berry's made the decision for me.

Chuck: Well, it's definitely not all the glamor that the customers and public think it is. It's really a lot of HARD WORK! It would be safe to say that it is a 24-hour job. But I knew it would be from my previous experience working here. There is always something to do, and one can't help taking the responsibility home ... IF one hopes to make it a success!

Berry's had a rather "low" reputation around town. Since I've taken over the clientele has basically remained the same, but their attitude is quite different. It's not a rowdy crowd anymore! Things that were allowed or tolerated before somehow have disappeared. It's safe now. Customers? Basically they are all alike, in a way. A new bar opens and they will try it for awhile ... but they come back to roost.

Nez What would you consider your rewards as being a bar owner?

Chuck: Right now, getting to know and understand Black people better, which I think we all should do. We should all take time out to find out about-each other . . . let's really have a Gay world, not just call it a Gay world. This is how I feel . . . someday I'd like to see it where a lady can wear diamonds and pearls to Harlem, EVEN if she isn't a tramp . . . and feel welcomed. I would like the entire world entirely mixed. And, I intend to start with this place!

Nez Any regrets so far?

Chuck: Okay. Regrets. Not having the money to completely redo the bar, to bring it up to "people's code,
much less my own expectations. But, in time I will.

Nez: Who IS Chuck?

Nez: Please, I have a class tonight! Why am I forcing myself to buy another drink?

Chuck: Go ahead, darling: you deserve it . . . Little Mother, another round!

Would that I could have presented all that transpired that afternoon. Chuck truly has a beautiful rapport with his staff and customers that would be envy of many a bar owner! We were interrupted several times by customers who just wanted to say hello to Chuck, and he never once ignored them, brushed them aside, or cut them short ... I was the interloper and had to wait my turn until he got back to me. It really opened one eye, and then the other one . . . and then the other one!
You want to know something? That SOB WILL DO IT!!!

"Little Mother," manager of Berry's, is a true delight behind the bar, and look for an auction coming up later this year to benefit a particular person at St. Anthony's Dining Room. Somehow, I know it will be a huge success!

Until next time with the bits and pieces, take the time to find out about someone . . . you just might be "hella surprised!"