Scare-larious! Terror Vault at The Mint is frightfully fun 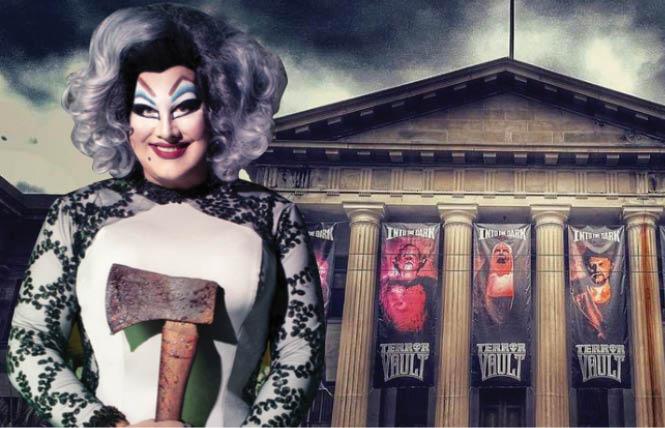 The multi-talented film director, event producer and drag show favorite sat down with the designer David Flower and event co-producers of Terror Vault on one of many sets to discuss the popular interactive show. 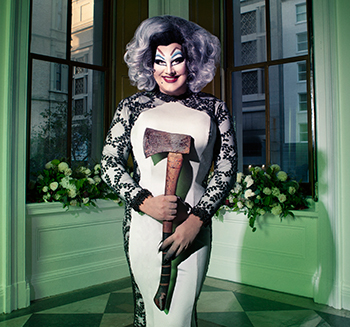 "As a kid who put on little haunted houses, over the years I got more ambitious," said Peaches, whose obsession with haunted houses, including Ocean City's 'Morbid Manor,' continued into his early creativity.

"At 13, I wanted to do a haunted trail because the basement was too small. So we got permission to use the property, we got insurance, and press coverage. As a young kid, I was so much the way I am that my parents accepted me. They had time to ease into it. My mother dressed in a ridiculous costume and took tickets. My father took the chain off his chainsaw and became the finale of our show! I look back and realize that I have the coolest parents in the world."

Those proud parents unleashed the eventual producer of the popular Midnight Mass horror film tribute screenings, dozens of live musical drag parodies, hundreds of drag nights, and the director-writer of the feature film All About Evil.

Ultra fun
The blend of wild creativity and producing acumen is what makes Into the Dark unique, said Jordan Langer, President of Non Plus Ultra. The event company holds a temporary lease at The Mint and produces other large-scale events, from dance concerts to weddings and corporate parties. 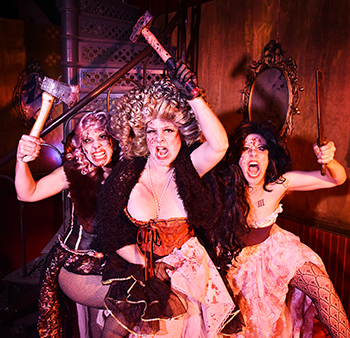 "We try and open up the doors to let people see this amazing space," said Langer. "We take the proceeds from corporate events and pour them back into community events like this one, which is a bit of a hybrid."

Langer cited Into the Dark as one of the most popular events at The Mint, whose promotional banners were drawing attention on the sidewalk outside the building.

"In San Francisco, it's getting harder for people like myself to make creative stuff. In the '90s, I was lucky to make shows and make a living. That's not easy anymore. It's really important that we engage the local artistic community and bring in performers."

Along with more than a dozen actors, Flower's set designs, expanded from last year's, brought many technicians and scenic artists to create the maze of rooms and creepy settings.

The original Terror Vault was what Peaches called, "a perfect mix," with the production company, and he lavished praise on Flower as "the real genius of the show. He's been working on this since June."

Many of the set pieces were bought at a recent large-scale prop and furniture estate sale in Alameda. "Scouring junk shops, scavenging yard sales," Peaches said, was fun.

"I love it all, but enjoy the shows the most. There is nothing better than when you start the night and hear the first screams." 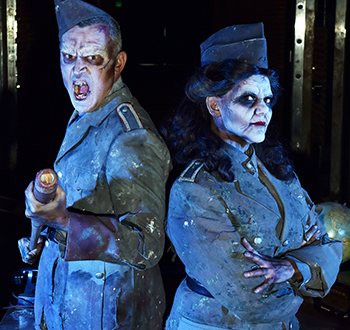 Peaches' passion for creating such shows has a deeper intent than a wacky night of scares.

"As we become more disconnected in our daily lives, people are looking for ways to connect. Here, you experience something together, enjoying it, laughing and screaming with each other, and in pure joy. As cheesy as it sounds, I love it."

Truly, as a few friends and I traversed the multiple walkways and sets on the later preview night, we temporarily bonded with others in our group, hiding behind each other or defending our more frightened pals. Patrons who are more willing to be touched, scared up close —and even fed an odd nibble— were given glowing necklaces to wear.

In the additional fast-paced zombie Apocalypse escape room/maze, friends and strangers hastily worked together to find clues to 'solve' a zombie invasion. The group activity was unlike any passive entertainment.

And although most of the events' spaces are dark and small, wheelchair-using and/or deaf patrons can request their own accessible variation of the tour. One of the cast members is a wheelchair user as well.

"An ADA-compliant accessible haunt experience is available, which is really awesome," said Langer, who added that the tour involves many senses; sight, sound, even smell.

A group of deaf patrons from last year brought their own interpreter, but attendees commented that the show was so absorbing they couldn't read the interpreter. Peaches invited them back and sent the script for them to read in advance.

"They were very happy because they knew the story," said Peaches. "With our show, there is a plot and a script." 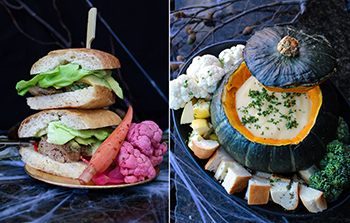 A few of the event café menu items

Part of that story ties the more unusual history of The Mint with a more horrific fictional version, from imprisoned murderers' ghosts to a cannibalistic family. Look for Matthew Simmons as Granny, Trixxie Carr, Steven Satyricon and other local favorite nightlife and theatre actors in some 'scare-larious' performances, which, Peaches noted, include, "as a warning to B.A.R. readers, in one scene; Full. Frontal. Male. Nudity!"

Set and setting up
The expansive production goes by in a whirl of screams and giggles, but it took months of planning and building.

"We built this from the ground up, since a lot of the rooms are empty," designer David Flower noted, adding that 80% of the space is used for the tour and zombie game. Having an on-site scene shop is "a saving grace for us," said Flower. "It's kind of a luxury to have them together."

Asked about any new surprises, Flower noted that there are many "little Easter eggs on every set."

Non Plus Ultra's Marketing Director Ryan Melchiano goes back years to a childhood friendship with Peaches/Grannell, who was friends with his brother in college. Years later, Melchiano and Grannell met up and discussed the project proposal.

"We mapped it out and put together this really cool story, what their vision was," said Melchiano. "Everyone on board knew it was not only the right thing to do, but that it could be amazing. It's been a dream in terms of production. I'm happy it worked out so well. To see people you know and care about grow something very grassroots in the performing arts that make San Francisco what it is, makes me very proud."

"It can be very frustrating, but with Ryan, we go to haunt conventions, and it's a pleasure working with people who are truly creative."

For Peaches Christ, collaboration is what creates the magic.

"I deal more with the performance side, and in fairness, it's a true partnership. That marriage between set, music, design and performance is where the magic kicks in."