Up Your Alley weekend's packin' 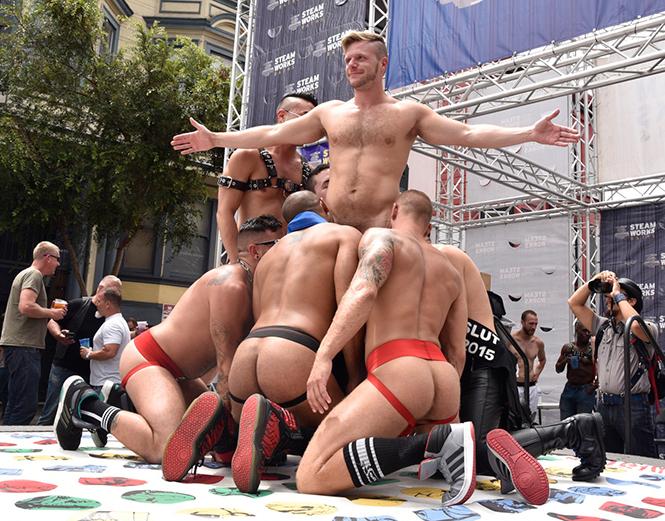 Something I've noticed the last few years of writing this column is the dramatic increase in the number of events surrounding our city's two big leather street fairs, Up Your Alley that takes place this Sunday and Folsom Street Fair in September.

As I've put the event calendars together that accompany this column, it's been rather obvious that producers, bars, clubs and other entities want a piece of the busy leather weekend pie. On the one hand, that's a positive. More options. On the other hand, it's a negative. More options. 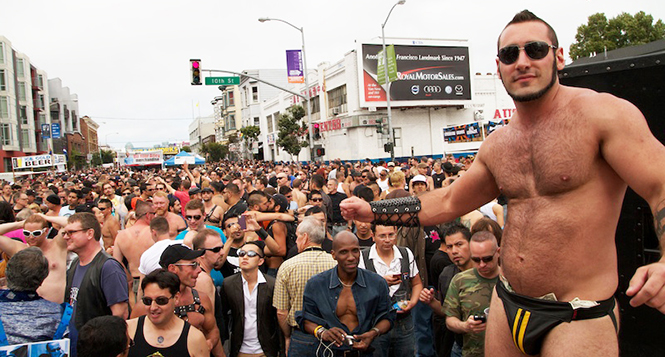 Panoramic view of Up Your Alley. Photo: Fred Alert

When each Fair had only a few surrounding events, it was easy to figure out what one wanted to do. Go to the big dance, or the play party, or the big bar event. Now it takes some planning, and in some cases hard choices to make.

Perhaps you already have an idea about what you want to attend, but if you need some help, navigate to https://www.ebar.com/bartab/leather-kink There you'll find the latest Leather Events calendar. You'll see a lot from which to choose. 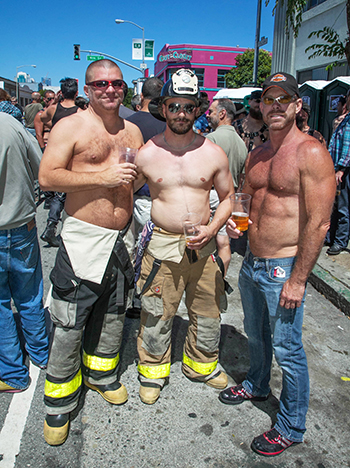 Terry Beswick, the Executive Director of the GLBT Historical Society, is excited about the event.

"We're thrilled to host Peter Fiske and other leaders of the leather community for this history panel. Together with our current exhibition on the late Alan Selby, and a small permanent leather exhibit in our main gallery, we are working to preserve and share these rich and inspiring stories of sexual freedom and culture. Unfortunately, our current museum is small and so many of our events sell out. We are working to establish a larger museum to do our community justice, and in the meantime, we will be video-recording this event and live-streaming on our Facebook page."

One unique event on Saturday is Sneaks that caters to the growing fetish of athletic gear. In Europe the athletic gear fetish has been thriving for a while. It's made its way to our shores and it's exploding.

Sneakin's in
In addition to great music and a hot crowd, Sneaks enforces a strict dress code. Everyone must wear sneakers along with encouragement to wear sports gear, singlets, mesh, underwear, knee socks, gym shorts, sweats, or track suits, anything sports-related or that you might wear to the gym.

I asked one of the producers, Mark O'Brien, about his event.

"We began throwing Sneaks in 2015 after Ben Bellayuto (one-third of Polyglamorous, along with John Major and myself), returned from Berlin and wanted to bring a taste of that city back to San Francisco," said O'Brien. "Since 2016 we've been at Club Six, which has allowed us to fulfill the vision of a dark, sexy sneaker and sportswear fetish party with great music. Tickets sold out faster than ever this year, but we are holding hundreds of tickets at the door for folks who show up early." 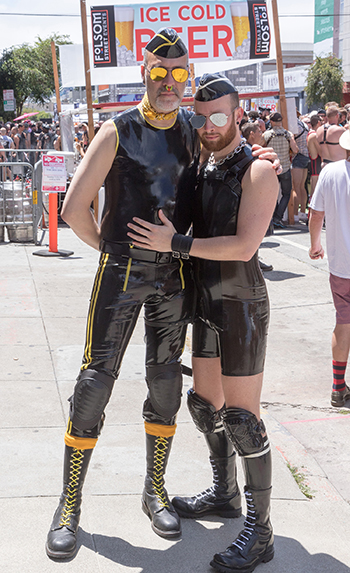 Rubber-lovin couple at the 2018 Up Your Alley Street Fair. photo: Rich Stadtmiller

On Saturday, San Francisco Bay Area Rubber, West Coast Rubber, and Rubbout are coming together for shiny and tight fun in rubber and latex. Their afternoon event at the Powerhouse, called The Shining, is followed later the same night by a rubber version of Code at The Edge.

Erick Lopez, a bartender at The Edge and a rubber enthusiast himself, commented on these events.

"I cannot thank Brandon Leon, Nico Watson and Alan Gamrican enough for making The Edge a home for the latex community. We are always happy to have them here and will be happy to remain their permanent home bar."

The local rubber community is incredibly welcoming to newcomers and the curious. So, if you think rubber might be your thing, check out these events and walk up to some of the rubber guys and ask them about their fetish. They're a friendly and passionate bunch.

I could keep mentioning events. From just Thursday to Sunday I count 39 events to choose from, and I'm sure there are a few I'm missing. You can't be an LGBTQ leather or kink aficionado and claim there's nothing to do this weekend. Have fun! 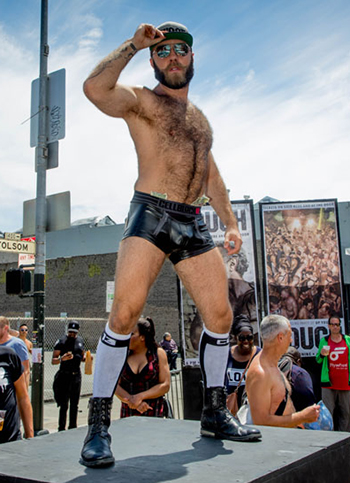 Gogo cub at the 2018 Up Your Alley Street Fair. photo: Rich Stadtmiller

They're now moving ahead with the seating of that Board. Additionally, they'll soon be hiring a full-time District Manager to oversee the daily operations of the District.

Anyone interested in being a member of the District's Board of Directors can visit their website to see details on how to submit your name and background information for consideration.

If you might be interested in the position of District Manager, they will publish a job description on their site along with submission guidelines. www.sfleatherdistrict.org