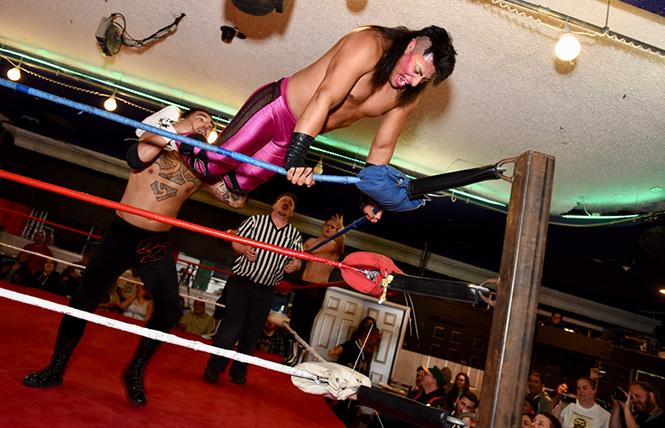 On Thursday, June 13, pro wrestlers will be in the center ring for a Pride event that offers something a little bit different. The evening will end with one of the wrestlers showing his bra and panties!

It all happens at El Toro nightclub in the Portola District, where the villainous wrestler Rik Luxury goes up against "The Sexy Swinger" Jheri Gigolo in an all-out battle to save Pride. The first heavyweight to strip off his opponent's evening gown and reveal the other man's bra and panties is the winner. 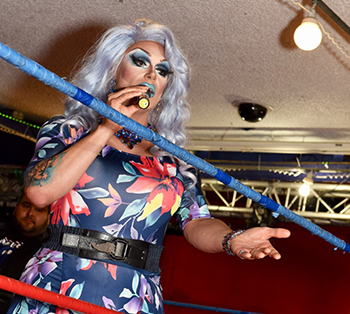 The event is called Wrestling For Charity, and part of the evening's proceeds will benefit the Portola Neighborhood Association.

Pratt noted that El Toro is not a queer-specific space, but a Latin bar. He said that the owner is very excited about bringing inclusive events and activities to the space. El Toro hosts the Portola Neighborhood Association's drag bingo twice a year, among other diverse and inclusive events.

"Every year I host an annual drag pageant for charity," said Pratt. "The last two or three years we've been at El Toro because they've been so inviting to us. They're very much looking to invigorate San Bruno Avenue and the Portola neighborhood and make it a nightlife destination location for all people, queer people included."

Wrestling For Charity is a professional wrestling organization that produces benefit events for various local charities. The organization is a collection of many of the Bay Area's favorite names in wrestling. Pratt said that the wrestlers were indeed professionals, and that he was the only drag queen involved. 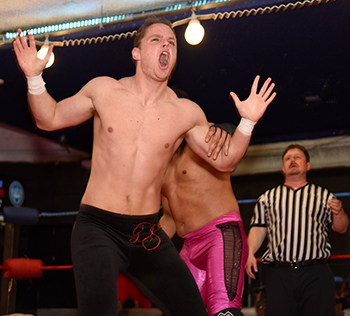 A cute "baby-face" wrestler at a 2018 Wrestling for Charity night at El Toro. photos: Steven Underhill

When the audience sees the show, they'll be hearing Rik Luxury making homophobic and misogynistic remarks, but it's all an act.

"In Wrestling For Charity, Rik is the epitome of all the things that I stand against," said Pratt. "The way we present this, I'm very much the heroine. I'm not presented as a drag queen but as a female character, and the audience accepts that. This is a theatrical experience, it happens to be an athletic theatrical experience. It's theater presented in the wrestling context. The characters that are portrayed are done to tell a story for the audience. Rik plays his character extremely well. He epitomizes all the evil, horrible things that we're facing."

This is in direct opposition to Jheri Gigolo and Pollo Del Mar.

"I'm there as a symbol of female empowerment," said Pratt. "And Jheri is there to play to our gay audience members. He loves and celebrates them, and he bills himself as coming from the heart of the Castro. That's how theater plays out in the world of professional wrestling. Somebody is the embodiment of evil or the darkness that we face, and then there's somebody who embodies the good, and the viewing audience hopes that good will triumph over evil." 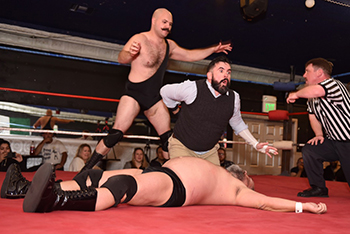 Pratt describes the match as an immersive theatrical event in which the wrestlers play characters, and that the audience is made part of the show.

"It's long been known that professional wrestling is scripted," Pratt said. "I'm one of the main creative influences for these productions, so I've been guiding this storyline for over six months. The idea of Rik and Jheri facing off in this absurd ludicrous evening gown/bra and panties snatch was my idea. The guys thought it was amazing and hilarious, something that you won't see in any other show."

Reactions from the audience has been positive, according to Pratt. People who come to see the matches are a mix of LGBT folks and general wresting fans, and they're into the show because they want to see more than just a wrestling match. They're getting a solid storyline from performers who aren't just wrestlers, they're actors and comedians.

"One of the things I love about this show is that it's attracted a lot of people who do not consider themselves professional wrestling fans when they arrive," said Pratt. "I've had a number of women show up, and they've absolutely had a blast. Our show is in a small, intimate environment, where the show is happening right in front of you, around you, and sometimes on top of you, and people are blown away not only by the interactivity of it all, but the kind of energy it creates with the audience, the show, and the performers. It's truly a one of a kind experience."