Moving forward after Pride and through despair 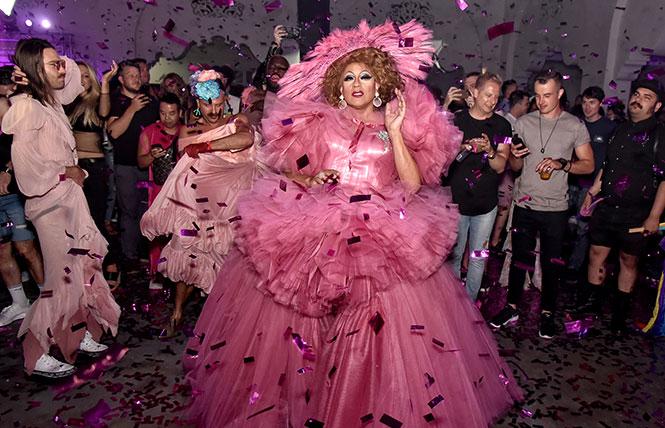 If last week wasn't rough for you -and I'm not talking about your Pride hangover- you've somehow been avoiding the news, or you are stuck in a safe little bubble, then I really have no idea why you're reading this column.

Let's rewind a little, starting with Pride weekend. As you probably know, my name is virtually synonymous with Pride weekend celebrations in San Francisco, and for the 15th year in a row, this year was no different. Except for the fact that this year, I held my first ever Saturday night party at the former Fillmore West, which in its heyday hosted the biggest acts of the Flower Power era. It was a huge success, and I hope that people with big dreams continue to breathe life into this long-dormant event space. 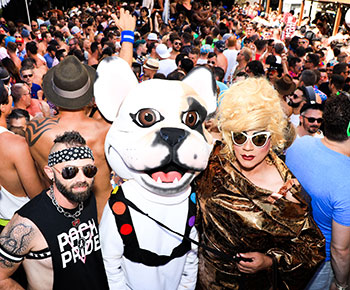 Juanita MORE! (right) at her Pride Sunday party, with the amusing costumed version of her dog Jackson. Photo: Shot in the City

My Sunday party was tradition, full of love and smiles as expected. Thousands of San Francisco's most gorgeous men, women, and genderqueer beauties crammed into the patio space at Jones for stiff drinks and stiff... well... if you went, you know, and if you didn't, I hope that you were somewhere surrounded by those you love and those you want to love.

To top it off, by attending my Pride events the past few months, you helped raise over $77,000 for TRUTH (TRans yoUTH), a youth-led partnership between the Transgender Law Center and the GSA Network amplifying the voices of trans and gender non-conforming young people, and creating safe spaces for them to share their struggles, learn empathy, and build public understanding.

Pride is the time of year when our city displays to the world ¬-in its most extravagant way- just how fabulous our community is. And while it's important to live our best personal lives, I have always considered Pride an especially great opportunity to give back to our community. I call on all of my friends and colleagues to take that opportunity going forward. Thank you from the bottom of my heart for supporting these events. 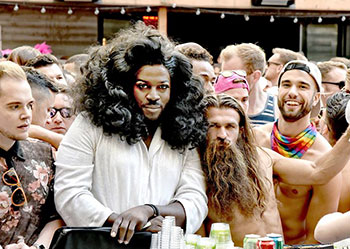 Blue Monday
Regardless whether you partied too hard, stayed up too late with a new or rediscovered lover, or balanced everything just right and had a quiet night in, Monday morning hit like a ton of bricks. That's because Monday morning, the Supreme Court began dropping a string of decisions that affirmed discriminatory redistricting laws, allowed anti-abortion centers to lie to their patients, approved not-my-President's hateful Muslim travel ban, and gutted public sector unions.

Meanwhile, our country -which some of us used to recognize- has been locking up thousands of innocent migrant children and forcing toddlers to appear in court, often without legal representation.

When I was young, I would hear stories about my grandmother, who was born in Chihuahua, Mexico, spending time as a young girl traveling freely between Mexico and the United States with her father, who was a railroad worker in the early part of the 19th century. My great-great grandfather was a traquero, a labor worker who laid track connecting Mexico with the United States, making it easier for migrants to travel throughout North America.

It's tragic to think this country once took pride in forging new ways to bring us together, and now we're building walls that will take a very long time to break down. 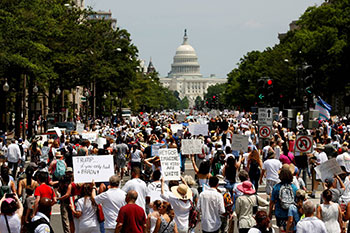 Protestors in Washington, D.C., two of 700 marches on June 30 decrying the separation of children from their immigrant families

It's a lot to handle, and a lot of people have been reaching out to me, asking what to do and how to get involved. I've seen people who I love drift quickly to despair, shouting out in social media posts that this is the end of times and that we'll never recover.

I totally get it. Times are tough, but we need to be hyper-aware, even if at times it's painful to pay attention.

Many of us knew that this was coming. We knew because his entire campaign was based on hatred of other people. Hatred of Mexicans, women, the Muslim community, differently-abled people, and the media. Over the past two years, we've organized marches and filled the streets protesting the degradation of women, science, and LGBTQ rights, and we've repeatedly braced ourselves and shown strength in the face of white supremacy. 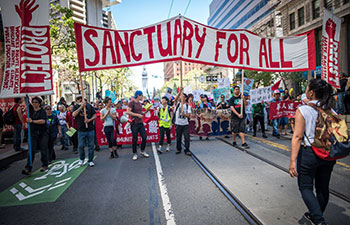 Protestors in San Francisco, one of 700 marches on June 30 decrying the separation of children from their immigrant families. photo: Bay Resistance

Step up, fight back
I know what to do, because it's what our community has always done. Whether in the face of hatred or greed, or when left alone to battle through a plague, we have always stuck together, and we have watched out for ourselves, for each other, and for the most vulnerable among us. The only way forward is to live our lives unapologetically and without fear. We must continue to step up and fight back.

I understand despair. I have felt despair, and I have felt weakness. Even though I'm the most confident no-bullshit queen in this bright and layered city, I'm still human, and I still need my community.

But at the end of the day, I'm going to need you to step up with me. I need you to be by my side, and I'm going to need you to bring all of your friends and family, too. If you can do that, I am committed to doing the same. We have fought our way through the darkest times, and we have all lost loved ones along the way. This current darkness may be no less dangerous, but our Pride is more than just a weekend, and we must be as proud and resilient as ever.

So get ready to step up, or get off my back, because I'm ready to fight, and I'm going to do it in heels. If there's one thing I'm certain of, it's that I'm not gonna stop being your mother, taking your lead, and caring for this community until I get to my grave, and that will be on my own terms, when I'm damn good and ready.