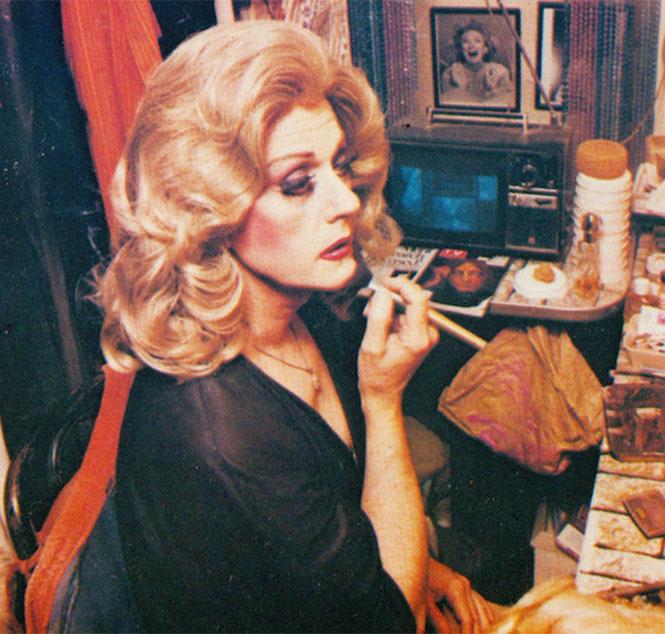 Laverne Cummings in the program for a 1983 Finocchio's show, preparing before a show. Scan courtesy J.D. Doyle

When Laverne Cummings died in a pedestrian accident in Las Vegas on March 22, 2018, we lost more than an astounding artist, vocalist and female impersonator. We lost a connection to a world that is quickly fading from view. Cummings not only worked at Finocchio's for 26 years, but was a performer in the Jewel Box Revue as well. It took considerable courage to be a performer in the early decades of his career.

Paul Laverne Cummings was born in Santa Ana in 1927. In a 1977 article in the San Francisco Examiner he related how he got his start.

"When I was in high school I was in the choir," he said. "I was always told to sing lower, but I wanted to be a soprano. After high school, some friends took me to audition at the Club Continental, a gay night club owned by Mickey Cohen."

Ponder told me that the Continental was not gay and did not feature cross-dressing acts and it is more likely that Cummings performed at the Flamingo Club (1027 N. La Brea), which it is suspected Cohen controlled. The Flamingo Club closed in 1951, after Cummings had left for Florida.

Cummings moved to Miami in 1950 to work with the Jewel Box Revue. The Revue has roots back to the '30s, and began touring in 1942. It was unique in that it was established by two gay partners, Danny Brown and Doc Benner.

Cummings (whose drag name is alternately spelled Lavern and Laverne) was not the only L.A. transplant in the company. Headliner Jackie Maye had moved from the Flamingo Club to the Jewel Box and was a headliner there by the early '50s, so perhaps Cummings followed Maye.

Laverne Cummings in the program for a 1983 Finocchios show, in and out of costumes. Scan courtesy J.D. Doyle

You may think female impersonator acts only performed in sophisticated urban area, but while Cummings was with the group they performed at places like the Village Hotel in Erie, Pennsylvania; Andre's Tic-Toc Club in Syracuse, New York and the Schwartz Hotel in Elkhart Lake, Wisconsin.

Clearly they performed far and wide and exposed a large portion of the country to their talents. But the revue performed in large cities as well, and Cummings was in the company when it performed at the Garden of Allah (a gay-owned cabaret in Seattle) in the mid-Fifties.

This troupe was groundbreaking in another manner as well. During the 1950s, they were a racially integrated troupe. The essay "Sliding Scales" by Elizabeth Drorbaugh, in the book Crossing The Stage: Controversies on Cross-Dressing reports:

"Unusual for its time, the Jewel Box Revue was a multiracial troupe which included at one point white, black, Latino and (one) Native American performers. Touring the Deep South during times of legislated bigotry was doubly risky for the interracial company of gender impersonators."

With the Jewel Box, Cummings also did independent shows, and that was how he first came to San Francisco to perform at the Beige Room in August, 1954. By 1956 Cummings was billed as being a "soprano, direct from San Francisco" when playing Rudy's Blue Star in Meadville, Pennsylvania.

The first record of his performing at Finocchio's is from the After Night Falls column in the San Francisco Chronicle from Nov. 3, 1956:
"Laverne Cummings, new songstar in Finocchio's elaborate revues, comes from Miami night clubs."

After Night Falls was a nightlife column by "The Owl" (Chronicle writer Harold "Dutch" Schaefer). Cummings was a favorite and was featured often in the paper (usually with a photo). Schaefer seemed taken by Cummings split vocal technique (Cummings was both a soprano and a baritone and would often drop his voice while singing and do some phrases in a lower voice). I think Schaefer was referring to this technique when he wrote on March 23, 1957: 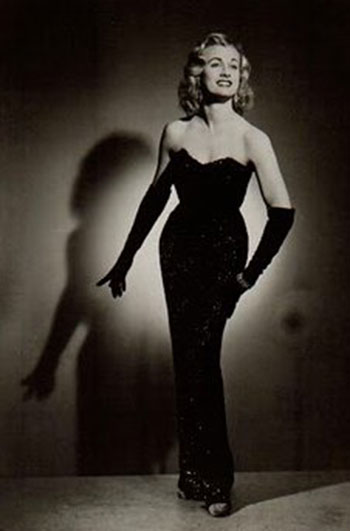 "LaVerne Cummings, the Blonde Debutante of Song, is the most controversial female impersonator ever to appear in Finocchio's Lavish Revue."

Far more often, however, The Owl wrote of the glamour associated with Cummings performances. Typical of this was a column from July 4, 1964:

"New at Finocchio's: Flashy new acts are being presented by the singing stars LaVerne Cummings and Al St. Claire, in Finocchio's current musical revue and the add a lot of what Joe Finocchio calls 'glamourous zip' to the show. Both singers are masters at the art of impersonating glamour gals of the glamourous type. They also are expert at wearing gorgeous gowns with fetching grace, for which Finocchio's is world-famous."

Cummings continued performing at Finocchio's until 1982, establishing a presence in San Francisco exemplified by the Examiner article, which presented a biography as well as a 'how-to' article that gave tips on how to properly do drag.

Cummings was well-loved by his coworkers as well. David de Alba, who began working with him at Finocchio's in 1969, maintains a website with information on his own performance history, which also includes a tribute page to Cummings (http://www.david-de-alba.com/david9.htm). De Alba is also responsible for several videos of Cummings which are available on YouTube.

Holly White worked with Cummings at Finocchio's in the '70s, and reflected on his life:

"I talked to Laverne Cummings a week before the accident. He had been planning a return to the small stage in Vegas. He would sing as a man, his 'falsetto,' high voice had long since gone. He still had his lovely voice talent and tone and technique. He would have pictures of himself in drag on the stage and wanted two showgirls to parade as he sang his old songs at the club. He was still full of life and ambition at 90 years!"

LGBT history has not been kind to female impersonators, seeing them as somehow apart from the community, and as entertainment for straight tourists. But it is important to remember that many performers lived in the community and paid a high price for their art.

In the Examiner article, Cummings said, "My parents are dead. They never saw me perform, although they did see pictures. They were strict Protestants."

These performers also had an effect on their audiences. In the documentary Storme: Lady of the Jewel Box, Bobby Schiffman, former manager of the Apollo Theater reflected on the Jewel Box Revue.

"It was a show that people came back to see time and time again. The audience supported the community."

There are few performers from Finocchio's still living, but they still have stories to tell. Reflecting on this history, David de Alba wrote, "The problem in Life is that a lot of people wait too long to do things and wait until a person dies in order to come up with tributes."

The story of this fascinating era deserves to be told.

The author would like to thank David de Alba, Holly White and Mel Domingo for their assistance with this article and JD Doyle for inspiration.