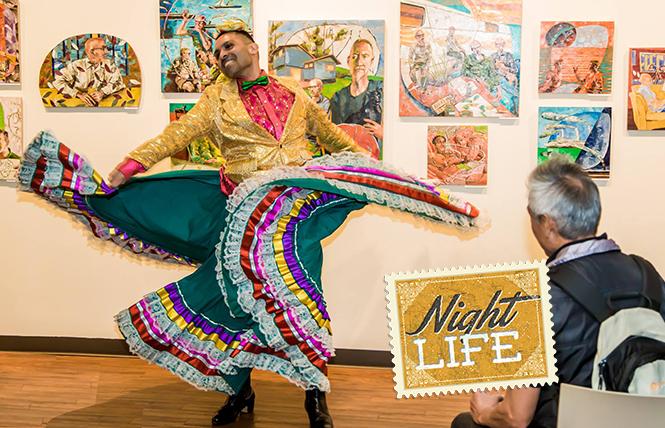 Here's a shout-out to the folks who tend to our nocturnal urges. Whether it's an evening's entertainment, a shot of booze, or a pinch of hip-swiveling pulchritude, we've got no shortage of winning personalities to celebrate.


Best Male Comic: Jesús U. BettaWork
Runners-up: Nick Leonard, Justin Lucas
From South of Market to the East Bay, Jesús U. BettaWork really does work hard, bringing his sparkling "100% real-fruit" comedy to innumerable cafes and bars, as well as traditional comedy showrooms, including the Punchline and Tommy T's. And this year, he's finally our winner. Praise Jesús!


Best Female Comic: Lisa Geduldig
Runners-up: Irene Tu, Karen Ripley
Sure, there are 12 days of Christmas. But there have been a whopping 25 years of Kung Pao Kosher Comedy, the Jewish humor showcase that comedian/impresaria Lisa Geduldig shepherds into being every holiday season. Geduldig hosts and curates a monthly comedy show at El Rio, as well as the new comedy night at Berkeley's Ashkenaz, and last year had a showcase at Feinstein's at the Nikko. 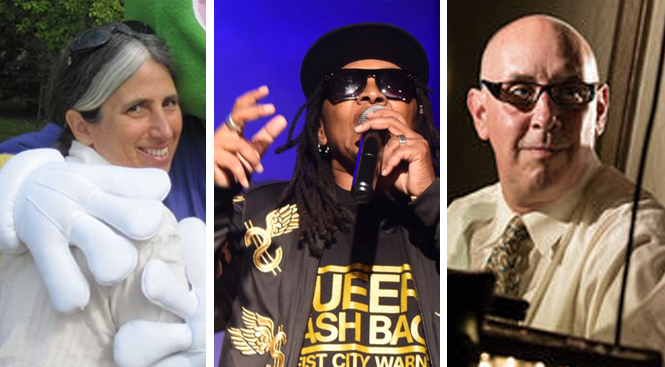 Best LGBT Band/Musician: Joe Wicht
Runners-up: Double Duchess, Vagabondage
Call it wicht-craft: Joe casts a musical spell on the city as he hops from sing-alongs at Martuni's, to performances with the Lesbian and Gay Chorus and the Oakland Symphony to local theater stages, where he acts, sings, and serves as music director. 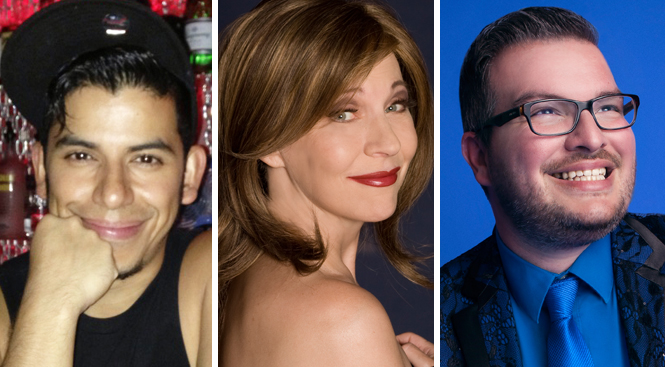 Best Bartender: Erik Lopez at The Edge
Runners-up: Robbie Cheah at Oasis, Steven Dalton at SF Eagle
It's a foursome! Erick Lopez is on a four-year winning streak in this category (And perhaps deserves Hall of Fame status to make room for a new champ). That said, Lopez, a widely networked community caretaker, is an ideal leather-clad mix of tough and 'tender. Lopez' latest public statement of shame-free sex positivity is the recent permanent installation of the Rubber Pride flag outside of The Edge (It's the black, yellow- and red-striped number).


Best Female Cabaret Performer: Connie Champagne
Runners-up: Paula West, Leanne Borghesi
Always a contender and back on top this year, Champagne (born Kelly Kay Brock) put her ever-popular Judy Garland impression in an all-new context last spring, playing the legend in Landmark Musicals' production of the Peter Allen bio-musical, The Boy from Oz. Whether fronting a band, performing her solo nightclub acts or on the theater stage, Connie is a consummate professional.


Best Male Cabaret Performer: Jason Brock
Runners-up: Joe Wicht, Brian Kent
Another Hall of Fame shoo-in, Brock has become a beloved Bay Area fixture since his X-Factor ascendance. Brock's artistic evolution has lately incorporated a balance between showbiz pizzazz and personal intimacy, best typified by his new Recovering Christian cabaret show, in which he explores the tension between his fondness for the gospel and religious music he grew up with and his aversion to fundamentalist doctrine. 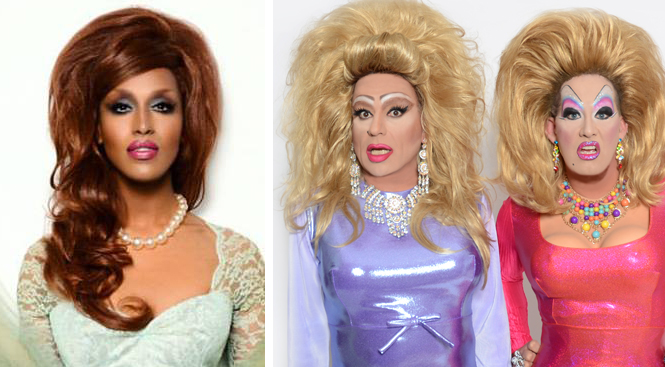 Best Drag Cabaret Performer: Honey Mahogany
Runners-up: Katya Smirnoff-Skyy, Matthew Martin
What makes Honey's drag different than the others? It's the sweetness. A practitioner of old-fashioned bewitchery more than gender-wrench bitchery, this social worker by day can't help but infuse her stage persona with an undercurrent of human kindness.

Best Drag Queen: Peaches Christ
Runners-up: Juanita MORE!, Donna Sachet
Idle hands are the devil's work. Busier than ever un-PC P.C. has two big shows coming up in the next few weeks: She'll be in Chicago for an onstage conversation and clip show with Mink Stole on April 18 and then back home to the Castro Theatre accompanied by Alaska, Heklina, and Coco Peru for two performances of Steel Dragnolias on May 5. Like her wigs, any Peaches show is guaranteed to be big, bold and a little bit scary.


Best Event Host/MC: Peaches Christ and Heklina
Runners-up: Donna Sachet, Juanita MORE!
Love you. Mean it! But this category is caught in an infinite loop. 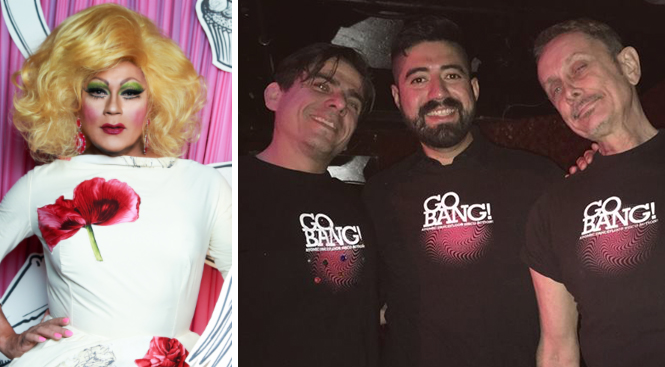 Best DJ: Juanita MORE!
Runners-up: MC2, Bus Station John
Musically as well as journalistically, our own nightlife columnist knows her way around the local beat, and has for decades. Not just a DJ and drag celebrity, MORE! brings communities together for important causes, like her recent March for Unity. From her Beatpig and PowerBlouse nights at Powerhouse, to Club Poppers at Q Bar, to her must-go annual Pride fundraising party, there's always MORE! in store.


Best DJ Duo or Group: Go Bang!
Runners-up: Honey Soundsystem, Hard French
The eclectic collective weaves beats from four decades into tapestries of sonic pleasure. Check them out at their monthly nights at The Stud, and their mixes online at Mixcloud and Soundcloud. 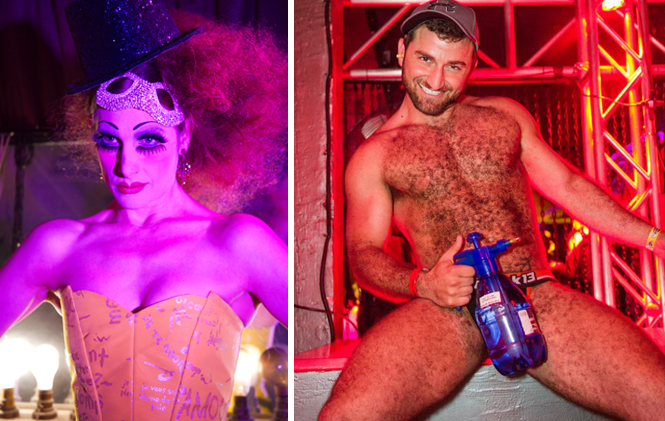 Best Faux Queen: Fauxnique
Runners-up: Miss Shugana, Crème Fatale
Gender identity has become a buzzword of the late 2010s, but Fauxnique has been on
top of the concept -and questioning it from every angle- for well over a decade
now. Intellect meets entertainment in Monique Jenkinson's continually striking
performances.

Best Nightlife Photographer: Gareth Gooch
Runners-up: Steven Underhill, Cabure Bonugli/Shot in the City
Gooch, whose work has been known to appear often in these very pages, is an avid chronicler of San Francisco after dark. His recent exhibition Smoke + Mirrors: Exploring Modern Drag at the Ravot Gallery was a highlight of his busy 2017, and runs through April 17.