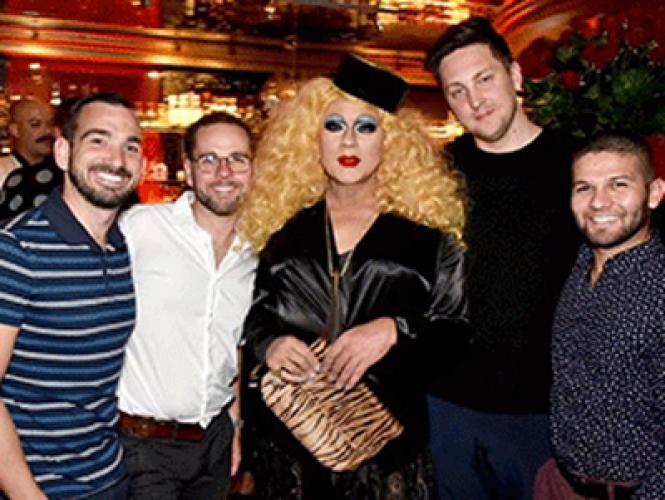 "Floor 21," the Wednesday happy hour hosted by Juanita More, was abruptly cancelled by new management at The Starlight Room, the penthouse club in the downtown Sir Francis Drake Hotel.

The event, set in the Union Square hotel's 21st-floor nightclub with scenic views, started several months ago and drew many LGBT patrons.

But after six months, More's event, which included DJ Sergio Fedasz and event photographer Gareth Gooch, was canceled this week.

"The new manager at The Starlight Room has made the decision to end 'Floor 21,' " said More in a statement on Facebook. "It was such a fun and successful event that livened up their Wednesday happy hour. We can't stay where we are not wanted, so I encourage you to spend your gay dollars elsewhere."

Linh Thanh Pham, Director of Food and Beverage for the past five months at the nightclub, is, according to More, responsible for cancelling the weekly event.

Pham was quoted with a reply in a forwarded email from Margo Helgen, the Seattle-based Regional Public Relations Director for Kimpton Hotels.

"With the enduring success of our 'Sunday's a Drag' promotion, our goal for other days is to regularly rotate our programming to keep things fresh and inspiring," said Pham. "We enjoyed working with Juanita for the past six months and welcome the opportunity to work with her on future promotions."

In numerous online comments to More's announcement, patrons of "Floor 21" and fans of More's events implied that the cancellation was 'homophobic' and that the management didn't appreciate a gay event. Others compared the "Sunday's a Drag" event, which has been held at The Starlight Room for more than ten years, as more for straight tourists.

Helgen responded to further questions about replacements for More's night in an additional email:

Helgen also replied to allegations of homophobia in the decision to cancel Floor 21.

?"There's absolutely zero validity to the homophobia claim," she wrote. "Kimpton as a company, as well as Sir Francis Drake Hotel and The Starlight Room, have always supported and had a part in the LGBT community and we celebrate and welcome diversity -- from our staff both front and back of house, as well as the partnerships within our bars, restaurants and hotels. If interested, you can read more about that here:

For Juanita More, this is just another event that succeeded, but has ended.

"I'm not upset about the new management's decision to end 'Floor 21,' " said More to the Bay Area Reporter after the online announcement. "The event was definitely a success. When I was approached to do something at The Starlight Room, I was told it was the slowest night of the week. I suggested a happy hour idea with special drinks, music and a photographer.

"The concept worked," More continued, who said that Pham told her that the event's "numbers weren't enough," meaning drink sales.

"We were averaging about $7,000 weekly once the party got into its groove," More said. "This past month, with the political event Dial It Up and a pair of birthday celebrations, we had to have reached over $22,000.

"Of course there were some slow nights," More added. "But they claim that the party wasn't creating enough revenue for them to warrant paying me, Sergio and Gooch. I don't think any other bar in the city would consider those numbers to be a lousy happy hour. It was definitely clear that they were not interested in supporting me, what I do, or what I brought to their venue."

More, whose other events include the popular Beatpig and Powerblouse at The Powerhouse -- and the always-sold-out Pride parties, dining events and fundraisers -- said she is moving on.

"With 25 years of drag under my bra in San Francisco, I have learned one thing -- not to stay where I am not wanted."

The Sir Francis Drake Hotel is owned by the Kimpton Hotel & Restaurant Group. Founded in San Francisco, the chain has been known for years as being gay-friendly, as Helgen stated, and for supporting and sponsoring LGBT events around the country at their hotels. In 2014, the chain was bought by the larger UK-based Intercontinental Hotels Group. So the decision seems abrupt and insensitive, at least.

"The one thing that I'm going to miss," said More, "is that I was seeing queer elders come out, who do not go out. They were there right when we opened. They thanked me, they loved the music, they loved me in drag. It's those kind of things that I'll miss about that venue."

More mentioned meeting tourist families who happened upon the event and enjoyed it. "These people would have never met or been around queer people," said More. "I met a kid in fifth grade who wanted to be a clothing designer."

DJ Sergio Fedasz said he will also miss the event.

"The staff was great, the venue was beautiful, the event was profitable and progressive," he said. "It made unforgetable memories. I grew close to people I respect."

More said she has plenty of new events, including the November 11 "Puttin' On the Titz" at A.C.T.'s Strand Theatre, which promises plenty of drag talents at the wonderfully renovated mid-Market theater.