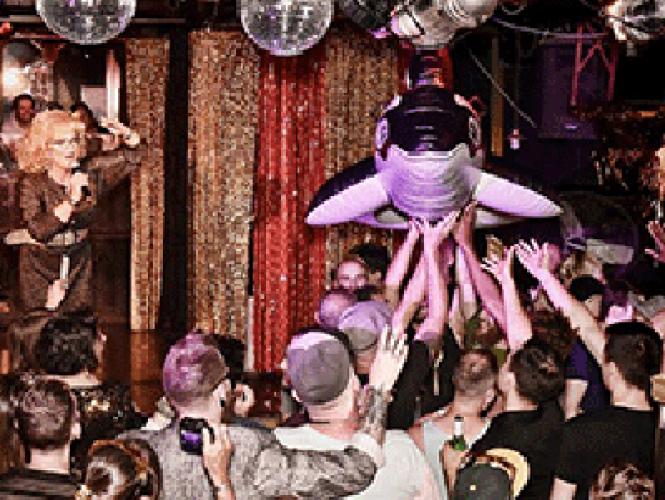 The historic Stud bar, under seige with the possibility of closing after the building's sale and a triple raise in rent, has found a group of nightlife and business professionals who've joined together to find alternative ways to keep the SoMa bar open.

After Stud owner Michael McElhaney held a July 3 meeting at the bar and announced the news of the building sale, Sigourney and others gathered to discuss what could be done. It seemed that the possible closure of yet another LGBT bar was the last straw.

"The real estate market shows no signs of slowing down. If historic businesses are going to survive, our community will have to innovate," said co-op Sigourney, "And that's exactly what we're going to do."

Sigourney has served as the effort's spokesperson. He's also the popular drag queen VivvyAnne Forevermore, host of the Friday night Some Thing at The Stud.

"We have the funding, resources and talent to make The Stud a profitable, successful business," he said. "We hope the new building owner will give us the chance to sign a market value lease and allow us to keep this historic bar a space where everyone is welcome."

Marke Bieschke, 48 Hills editor, SF Bay Guardian Publisher, nightlife guru and occasional DJ, has attended the meetings. Along with his partner David Schnur, he'll be working with the others to develop business and upcoming plans.

"I think this would have been coming anyway," said Bieschke in a phone interview. We discussed the events that led to the possible closure.

In 2015, the elder owner of the Stud building passed away, and her children just wanted to sell the property as quickly as possible. Unfortunately, MacElhaney wasn't notified of it until he went to City Hall to renew his lease, where he discovered that the building had been sold.

"This was just such a surprise that they had sold the building," said Bieschke. "It is going to be a fight."

After the sale, The Stud's rent, formerly at a quite below-market rate of around $3,000 a month, more than tripled. That rent increase, combined with the building sale (for nearly $2 million), led MacElhaney to do what he longed to; make plans to move back to Hawaii and hand over the business ­-and the bar's lucrative liquor license- to someone else.

Bieschke considers that the looming condominiums under construction across the alley, while visibly imposing, will not become a problem, should The Stud remain in its current location.

However, he added, "the minute the bus parking lot went away, and that thing started being erected, the writing was on the wall."

Beischke said that the new condo building has taken special precautions in its design, putting daytime-use offices and staircases on the side facing the bar. "They apparently worked to prevent noise complaints from piling up," he said.

Those new neighbors may not be as threatening as the owners of the bar's space, or the possible motel renovations next door. With the owners of the nearby hotel having purchased the former next-door offices of the Bay Area Reporter in 2014, might they not eventually buy the bar property and take over the entire corner? Condos have taken over much of the area, leaving older businesses dwarfed in their shadows.

"There is no business rent control," said Bieschke of the potential threat to the property. "There is no right of refusal for resident businesses."

Although the bar is in its second location since it began, there is not yet a plan to leave the current location, or find a new venue. The prospect of historic preservation as a legacy business may be a saving grace for The Stud, but those are not complete, even if approved.

"Our intent is to stay right where we are and do business at the bar," said Bieschke. "We're doing everything to stay in the building. Historic preservation would only work for the façade. It doesn't offer any protections to the business."

A designation of legacy business status would qualify the bar for city grants to bring down the rent of $9500 a month. Bieschke said the coop is working with Supervisor Jane Kim and the Mayor's Office of Economic and Workforce Development. By expanding their arts offering through live shows and other projects, they may be able to get municipal assistance.

"We can't underestimate the importance of the Stud to the LGBT community," said Supervisor Kim in a press statement. "Not only has The Stud been the site of important artistic and political events; it currently serves as one of the anchor business for the future Tenderloin/SoMa LGBT Heritage District. I'm honored to be helping lead the efforts to make sure the Stud is open for another 50 years."

Other city officials are stepping up to assist.

"Legacy Businesses like The Stud give our city its world renown character and are a major driver of tourism," said creator of the Legacy Business Registry, Supervisor David Campos. "Making sure that historic small business like The Stud are able to weather changes in the real estate will keep our city healthy and diverse."

Proposition J, which voters approved at the ballots last November, has been slow to find its two dozen applications processed. The legislation didn't include funding for a staffer to administer the program. The Board of Supervisors only recently approved the creation of a position, now filled by Richard Kurylo.

The nearby Lone Star Saloon has also applied for legacy status, and just this week was approved. While that building could still be sold, the bar itself and its back patio and street sign collection could be considered a cultural legacy worth saving.

Businesses and nonprofits are eligible if they've been around for at least 30 years, have been nominated by a supervisor or the mayor, and can prove in a hearing before the Small Business Commission that they've made a significant impact on the history or culture of their neighborhood.

Can a cooporatively-owned business, run like a nonprofit, sustain, or even maintain, a liquor license? Are each of the coop members responsible for raising the $9,500 each month? That has been accomplished for now with The Stud, and hopefully for each upcoming month.

Many of the details obviously have not been ironed out. But the fact that a community of people have come together to fight a fatal turn for a historic gay bar is a great sign.

"Recent nights have been pretty crowded," said Beischke. "The best thing is to go there and buy drinks. The advantage of working with other club people is we all have ideas about what to do there. We're going to start seeing more additions to the line-up."

Specific details should be revealed by October, he said.

Sounds of The Stud

"The beauty of a cooperative is that it's a learning environment," said O'Brien in a phone interview. "It's a chance to share knowledge. Everyone will have a hand in the operation. Being able to manage among the worker-owners will be an advantage for all.

"I also have an interest in the mechanics of operating a bar," said O'Brien, who has worked nights at many local venues. "Our big goal is to keep The Stud in the same place. That involves beginning sessions with the landlords. And, we're still in the process of establishing ourselves as a legal entity."

The possibility of designating The Stud as a legacy business might help.

"San Francisco as a city places a value on businesses that have been around," he said. "We're looking for resources to offset the market that is pushing legacy businesses out. Change is inevitable, but we want, as much as we can, to keep queer San Francisco alive. The Stud has been a home for wierdos, and we want to keep it that way."

But if by 'weirdos' one means lower-income under-represented queer people, the idea of buying drinks, paying door charges or even donating directly may be in conflict with a sustainable business model. Would the bar consider higher-end fundraisers for employed and wealthy patrons? Special benefit nights with higher admission might pay the bills more quickly, but would that in itself change the nature of the bar and its patronage?

Understandably, O'Brien could not be specific about upcoming new events that have yet to be created.

"The beauty of it will be finding that balance," he said. "We want to appeal to a popular audience. But we want people included. There have been discussions that not every event needs to turn a profit."

"I think we're all gonna do a bit of everything," he said. "There's an eye toward preserving The Stud and maintaining it as an economically viable business, and that includes bringing people into the bar."

Monolithic new buildings will sprout up to surround the funky one-story bar. But it seems to be the last stand for those fighting to preserve it. By saving The Stud, the cooperative will save a pivotal part of local queer nightlife.

"Our mission is to make this a model possibly for others to save queer nightlife spaces in the future," said Bieschke. "It's a unique and excruciating fight. If we can form a path where collectives can not only preserve legacy spaces, but foster new ones, then we would love it to serve as a successful model for other queer spaces."

Marke Bieschke: Communication and Promotion (Publisher of 48 Hills, The San Francisco Bay Guardian, board member with the GLBT Historical Society)

Mica Sigourney/VivvyAnne ForeverMORE!: Promotion and Performance (eight-year host of Some Thing at The Stud, Artistic Director of performance group OX)

Visit The Stud at 399 9th Street at Harrison. www.studsf.com

Read Mark Freeman's updated history feature on The Stud (first published in the Bay Area Reporter in 1994) at markhfreeman.wordpress.com/the-stud-decade-by-decade