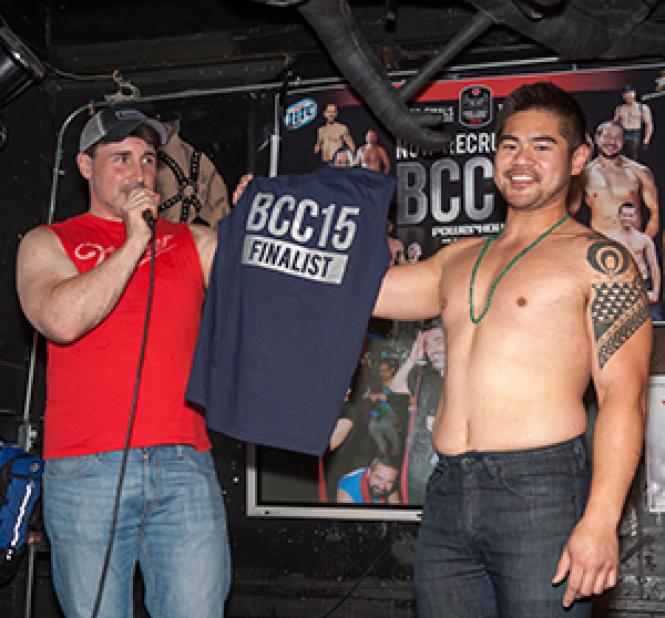 In what has become an ongoing tradition at The Powerhouse for years, men of all shapes and sizes have been taking their shirts off in the fun and sexy Bare Chest 2015 Calendar competitions. With eighteen finalists chosen from the many smaller competitions, the final event will be held Sunday April 27, 5:30pm at DNA Lounge, all to raise funds for the AIDS Emergency Fund and Positive Resource Center.

A stalwart host of the fundraisers for three years, Mark Paladini said that the Bare Chest events have been held at The Powerhouse Bar since 1999. The annual events go back to 1984, where they were first held at The Eagle.

"There used to be two a month," said Paladini. "Now we've redesigned it where there's a preliminary round for the first three months of the year. Then if those gentlemen garner a certain amount of points, they make it to the finals at the end of April."

Along with selling lots of raffle tickets for prizes at the preliminary events, Paladini said contestants "are busy and very well-informed. Before they get involved, there's an orientation process. These guys go into it knowing what's going to be required for them, not just semi-finals night, but for the entire process."

The early years of the Bare Chest Calendar events focused mostly on contestants' hunky qualities. But as Paladini said, "Now it's evolved, like most other projects, to be about the mind, spirit and body. We're looking for guys that have a great sense of humor, not just a physical aspect, but that they're into it, and have a style about them. We're looking for a whole guy. That has allowed us to open up to a lot of different communities."

As stated in the event's website, scoring for the semi-finals is based on five categories: salesmanship, overall participation, stage presence, responsibility and raffle sales amount. The shift from the contest's original leather focus is notable as well.

"You see that reflected in today's calendar," said Paladini. "It's got a different focus and a different vibe. Tradition is important, but we do try to reflect the personality of the guy in the calendar, which will reflect him."

An amusing example is looking back to see Andy Cross photographed on a beach with a surf board, before he was later crowned Mr. SF Leather and Mr. IML Leather.

For the final competition and show at the DNA Lounge, Paladini mentioned the entertainment, which will include violinist Kippy Marks, co-MC Cookie Dough, and guitarist-vocalist Peter Feliciano.

Admittedly, "Some still compare it to a male beauty pageant, and there are some aspects that will reflect that," said Paladini. "Guys will wear their favorite sexy gear, and answer more reflective questions. But the event is meant to be a celebration of the sales and fundraising of all participants, not just about the twelve guys who will be chosen."

And this weekend's finals are just the beginning for the calendar men. Among the upcoming events are the annual dinner date auction, where winning bidders and calendar men will attend the Macy's Passport gala in autumn.

"It's amazing to see the guys involved in the process," said Paladini, who's been part of the local event fundraising community since 1998. "Some of them are coming out of their comfort zone, getting to know people, and making connections with guys they would have never talked to. This is a really great way to connect to the community."

This is just an additional component at the heart of the contests, which is to raise funds for AEF and PRC.

"Of course, the money's important to these organizations and to their survival," said Paladini. "But it's also about connections. It's a really different part of our community. There's something beyond just some guys in gay bars."

For the Bare Chest's Managing Director Will Victoria, "The Powerhouse has been my stomping ground for the past several years, so it seemed a good fit," he said.

Now in his third year in the position, he admitted that, "It's a pretty big job, but by the finals, it's really a celebration of all the hard work the contestants do. They'll raise well over $60,000 by the end. It's a celebration of their commitment."

Among the grand prize raffles at the Finals are a Macbook Pro, a Public road bike, and a local shopping spree at several participating stores.

As we discussed the atmosphere of complacency around AIDS/HIV in the gay community, Victoria emphasized the importance of both the AIDS Emergency Fund and Positive Resource Center.

"These two groups serve several thousand clients who are trying to survive on Social Security. The 'emergency' isn't the same these days; it's about surviving long term."

While other larger nonprofits have received criticism for high executive salaries, the Bare Chest recipients keep their budgets reasonable.

"Its one of the the appeals of working with AEF and PRC," said Victoria. "They have some of the highest returns for their client rate in the nonprofit world."