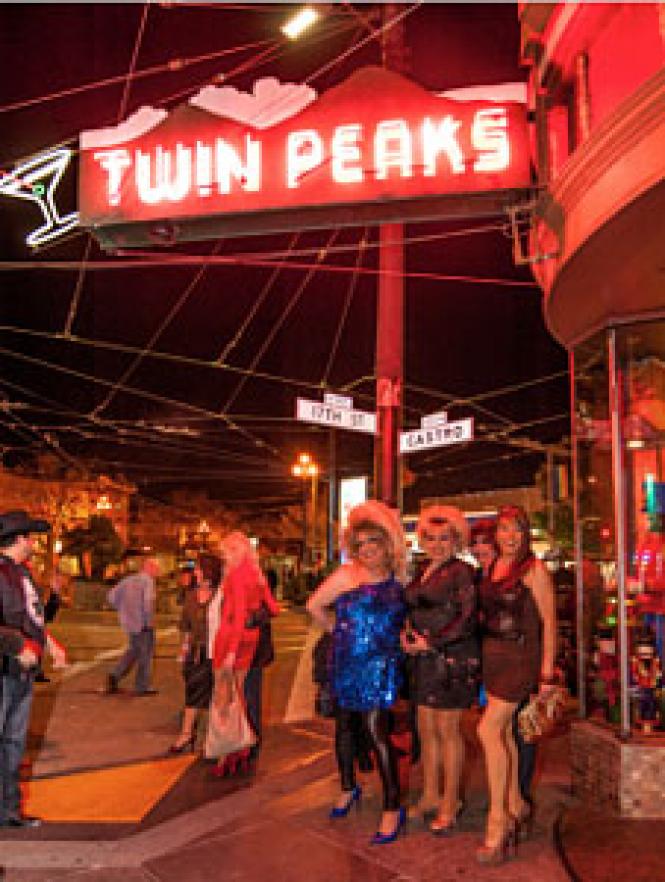 A drag trio of Twin Peaks fans outside the historic bar  (Source:Georg Lester)

Whenever I see the iconic sign for the Twin Peaks Tavern with San Francisco's Twin Peaks and fog depicted on it, I am reminded of the ad campaign for Blackglama: 'What becomes a legend most?'

Twin Peaks is indeed legendary as the first bar to install floor-to-ceiling windows, replacing the covered windows when it was purchased in 1972 by Mary Ellen Cunha and Peggy Foster. And 'the girls' (as they came to be known) were not opening up the bar to the world to make a statement - they simply wanted to be able to watch the world go by on the corner of 17th and Market. They did so much more. On January 15, 2013, the Board of Supervisors unanimously voted to give the bar landmark status.

Making this kind of simple change which accidentally changed so much tells says a lot about Peggy, who died in 2008, Mary Ellen, and the bar they have left us. Though they were running a business, they also were in the business of building a community at Twin Peaks.

When the current owners Jeffrey Green and George Roehm took over the bar in 2003, they maintained these traditions. One tradition was to treat employees well so that they would stay with the bar for a long time. Jeff had been working as a bartender at Twin Peaks since 1989 and George since 1990 when they took over the bar. Regarding the long tenure of employees at the bar, Jeff remarked, "There is a sense of family in the bar," and this sense of family is enhanced by the owners, who have two holiday parties annually to celebrate their community; one for employees and one for the bar patrons.

When I asked what they feel distinguishes Twin Peaks from other bars in the neighborhood, Jeff replied, "Ours is more of a conversation bar, we keep the music to a decent level." Though the neighborhood has changed much since they took over, the change Jeff notices most is a positive one. "The bar is more diverse now, and we have a good mix of gay and straight."

It's clear that they have found their niche. This positive tone is noticeable on frequent visits. One patron said that he had been meeting friends there weekly for years.

Asked whether he had noticed this phenomenon, Green commented that there were some patrons who met with one another there "on almost a daily basis." And they have a set of game players who come to the bar for card games as well, both canasta and cribbage.

It's no accident that there is a sense of community at Twin Peaks. The community events that they sponsor there make it clear that there is a spirit in the bar that connects them with the world. This goes back in time to the previous owners.

Mary Ellen and Peggy's friend Charlotte Coleman, who at the time owned the Mint, among other bars, started an event called The Great Tricycle Race in 1972. It was also the year Twin Peaks "went gay" and became a major stop in the event. Participants rode tricycles from bar to bar in outlandish drag. Much drinking and revelry was associated with the event, which lasted until the early 1990s and raised money for charities, from Guide Dogs for the Blind to Project Open Hand and the AIDS Emergency fund in the early days of the AIDS epidemic.

When I visited the bar, there was a flyer up for the San Francisco Fire Fighters Toy Program, an annual holiday event. Other recent charity events include fundraisers for Lighthouse for the Blind and a fundraiser for hurricane relief in Haiti. The bar participates in the AIDS Walk annually.

Green is rightfully proud of participation in this event. "We do really well for AIDS Walk," he said. "We raised $34,000 last year." Clearly the torch for community spirit has been passed from the past owners and continues to the current day.
One of the things that distinguish Twin Peaks from any other bar in the Castro is the décor. Again, this is something that goes back to the previous owners. When the bar opened in 1972, the owners wanted the bar to be the gay answer to Henry Africa's and other fern bars of the day. The stained glass lamps, paintings and photos on the walls of the bar give it that same feel to this day.

But when I asked what they felt was the outstanding feature of the bar, Green and Roehm answered in unison, "the back bar." An astounding and beautiful piece of Art Nouveau woodwork, 'the girls' had moved it from a banquet room in the Mission.

Another feature which goes back to the opening of the bar is the framed text which says 'No Cross No Crown' mounted between the windows facing Castro Street. The quote is originally from a tract by William Penn. But in the context of the LGBT world and Twin Peaks Tavern, it clearly means that without struggle and suffering there is no victory.

Another prominent feature of the bar is the small balcony, which allows you to sit with your drink and survey the bar. "It's a great first date spot," Roehm said.

The décor of the bar changes to accommodate the holiday season as well. There is a collection of nutcrackers collected by Roehm and his partner Fred, "which gets bigger every year," Roehm added. Over the years the nutcrackers have been named after patrons and friends of the bar they resemble, including a recent nutcracker named after the Empress Marlena.

Because of the prominent spot the bar maintains on the corner of Castro and 17th, and its long history, it continues to accumulate renown as time goes on. The bar was featured in the film "Milk" and both Roehm and Green appeared in the movie, George serving Sean Penn a drink and both bartenders appearing in the scene where the Coors beer boycott was featured. During filming, the bar became something of a home for some of the cast and crew: Gus Van Sant and Dustin Lance Black both came into the bar repeatedly.

The bar is often featured by the press when looking for comments for LGBT-related events. In preparing for this article, I came across an article from the Los Angeles Times in which George Roehm was quoted regarding President Obama's inclusion of gays and lesbians in the inaugural address last year. "I was very proud," was George's response when I asked what it was like to be quoted in the national press.

But beside the historic nature of the bar, there is something to be said for simply sitting at the epicenter of gay San Francisco.

"It's a great place to watch the world go by," said Green. He added that whenever anything is going on in the Castro, it's a prime location.

And in a world where there is so much change, it's nice to have an anchor. Asked for his plans for the future, Green said, "We'll be here for a long time to come."

Note: the San Francisco Planning Department's work to designate the Twin Peaks Tavern a landmark won the Governor's 2013 Historic Preservation Award from the California Office of Historic Preservation on Nov. 21, 2013. The report can be read at
www.sf-planning.org/ftp/files/Preservation/landmarks_designation/Adopted_TwinPeaksLM_Report.pdf