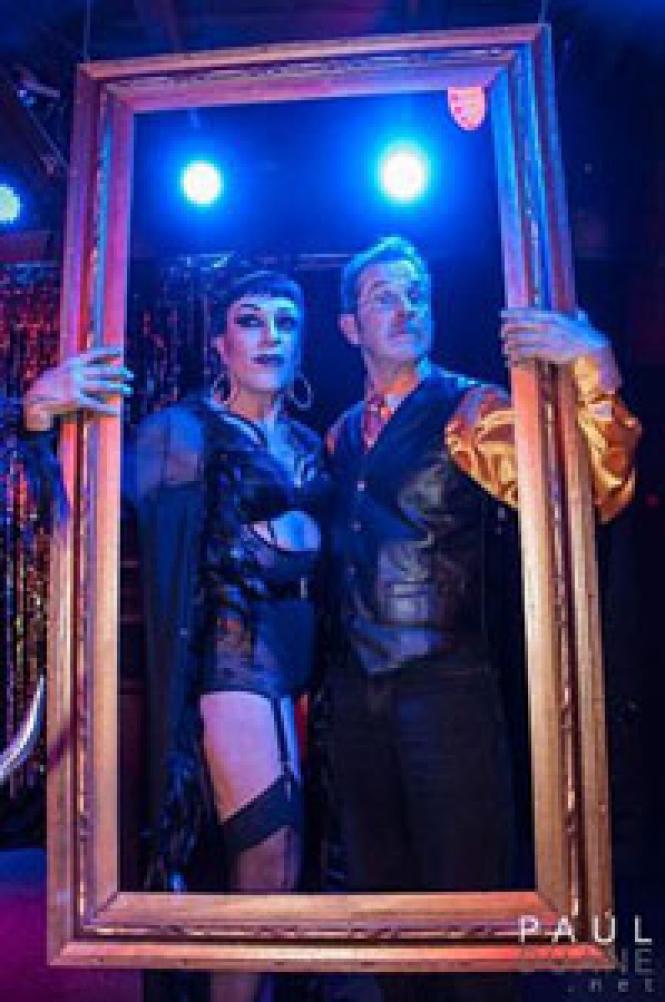 Joey Arias and Kristian Hoffman on the road with Lightning Strikes’  (Source:Paul Duane)

The eerily wonderful pop-opera singer Klaus Nomi is long gone, but Joey Arias and Kristian Hoffman, his two close friends and collaborators, will return to the stage in a rare duo concert. "Lightning Strikes," a musical tribute to the man who "came from outer space to save the human race," plays at Feinstein's at the Nikko for one night only October 24 at 8pm.

In addition to a few Nomi songs, Lightning Strikes features a mix of 1970s rock anthems, popular standards, original material and Arias' signature 'channeling' of Billie Holiday. The show debuted in Los Angeles earlier this year and toured to Portland, Salt Lake City, Seattle and New York. A European tour is being planned for early 2014 in conjunction with what would have been Nomi's 70th birthday.

I spoke with Arias when he was in London performing his solo show. Hoffman spoke separately via phone from his home city Los Angeles, where he was preparing for a concert with his own band.

"Kristian was the man who originally got Klaus to start a band," said Arias. "I knew him, and we were good friends. But at first, Klaus was just going to parties and singing arias. I wasn't even an opera fan. But I loved him and we had a great time."

With his oddly robotic gestures and iconic Kabuki make-up, Nomi grew to local fame in New York City at The New Wave Vaudeville Show, and soon became the toast of the downtown performance scene, most notably with his counter-tenor solo of the "Mon coeur s'ouvre a ta voix" aria from Camille Saint-Saëns' Samson and Delilah.

"He was a hit, like some alien character," said Arias. "It was the beginning of New Wave and Klaus was doing a couple of club scenes."

"Kristian came up with this idea to do Max's Kansas City," said Arias. "Klaus had been working on some bands with people, but it hadn't worked out. So Kristian put this band together." They collaborated on some covers of old songs, and soon Nomi, with Hoffman's arrangements and Arias' style inspiration, became the talk of Lower Manhattan.

Arias made a splash early on after moving from Fayetteville with his family to Los Angeles, where he worked with the comedy troupe The Groundlings, and got other performing gigs.

Arriving in New York City after a cross-country trek with Kim Hastreiter (who would later cofound Paper magazine) Arias started off like many others, in retail - but not just any retail. The chic fashion boutique Fiorucci made good use of Arias' unique stylings, and his pal Nomi even participated in the window-dancing and then-unusual promotional efforts.

"I had dropped music and got involved with fashion, but then all of a sudden through Klaus I got back into performance," said Arias. His unique song stylings as Billie Holiday were at the time only performed for small intimate shows and for friends.

But then, rock icon David Bowie heard about Nomi and Arias, and asked them to sing back-up for his now-famous December 4, 1979 performance on Saturday Night Live. Generous to a fault, through three songs, Bowie both absorbed the duo's fashion sense, while possibly acknowledging their unique upstaging, along with a toy poodle with a television in its mouth. (See "The Man Who Sold the World," at www.vimeo.com/49104160, "Boys Keep Swinging" on YouTube, and "TVC 15" at www.vimeo.com/40895664).

From that night on, everything changed for Arias and Nomi.

"Everybody I knew in the world went bananas!" Arias laughed. "Of course Klaus was the diamond on the cherry of that evening. We went beyond whatever that show was all about. It was indefinable, like a trio of aliens that met up."

Greater success soon followed. Nomi recorded a few studio albums and a live album, which included Hoffman's arrangements of vintage pop songs like "Lightning Strikes, "Simple Man," an eerie take on Chubby Checkers' "The Twist," and a witty version of "Ding Dong the Witch is Dead."

Sadly, Nomi's rising star burned brightly yet all-too briefly. He died of AIDS in 1983, and is considered one of the first celebrities to succumb to the disease before the ensuing epidemic ravaged New York, San Francisco and the gay male community, among others.

How did Arias endure those years?

"You did what you did," he said bluntly. "Music changed, but people kept creating. You went out at night. People talked about events. There was no such thing as all this media that's going on."

It was one show that toured New York, which Arias saw, that would later bring him to even greater fame. Cirque du Soleil's first tour in 1988 fascinated the singer. His later friendships with trapeze artist Andrew Watson and filmmaker Bobby Sheehan led to an unusual job offer decades later.

But with a demanding contract for one year of creation in Montreal, and a two-year performing run, Arias initially, and repeatedly, said no. He had his own evolving work, including his hit show Strange Fruit, which ran for more than a year at the Astor Theater.

"Then Bobby said, 'We can't do the show unless you're involved,' Arias recalled. "So then they got Mugler on board, and they called me for three months. Eventually, I got sucked into the machine."

Sexy and sensual, but not campy, Arias sang and performed as Mistress of Seduction in Cirque du Soleil's 2003 show "Zumanity."

With his tight corsets and gowns, "I came out looking like an insect," he recalled. "I had six costumes changes. People were shocked. It was intense. I sang all the time. I sang my ass off. I sang a lot. And I was really very dominant." Arias also co-wrote two of the show's songs.

And although he enjoyed Las Vegas, and working, the often restrictive nature of the company irked him.

"They would change the gay content for some shows," said Arias. "I kept asking in my renewal contract for more days off. I want to do a good show, and not miss any from exhaustion. But they thought that was too much."

"Kristian is a fantastic director and creator," said Arias of his current and old time collaborator. "Unfortunately, this age kills a lot of fucking great artists. I literary cry almost every day, thinking about Klaus and others who've gone." Thus, the tribute show shares his love of Nomi, and he and Hoffman's mutual friendship.