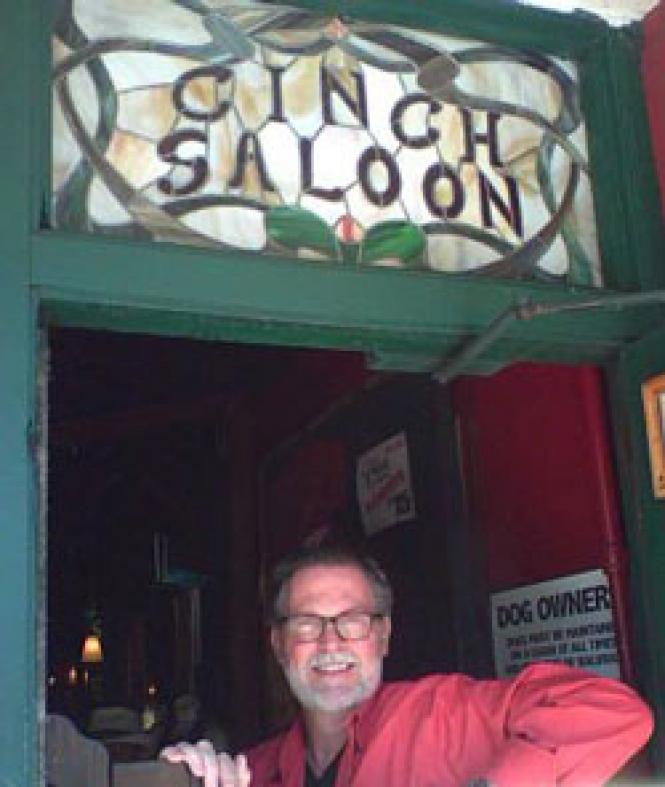 "So, do you trick up on Polk Street?"

A simple line delivered in the movie Milk from Sean Penn as Havery Milk to the Cleve Jones character is cause for reflection on the 40th anniversary of the Cinch, which was celebrated on June 30. The Cinch is currently the only gay bar on Polk Street, or one of the few, if you count the gay-friendly spaces. This is from a high which numbered between 20 and 30 venues in the neighborhood during Milk's era.

The Cinch's longevity is easy to understand, as it's a casual friendly place that attracts patrons throughout the day.

Bob Thornton, current co-owner with Robby Morgenstein, suggests that the success of the bar is due in part to it being as much a neighborhood bar as anything else. He thinks of the space as "everybody's living room," a place to come and have conversations. And over the 30 years that I've been going to the space I'd certainly agree - it's a haven for characters and the kind of place that it's unlikely you'll go to without at least starting up a conversation with someone you didn't know before. It's a place that has surprised me repeatedly with its community spirit. I happened by on more than one holiday when the bar surprised me with food - once with hot dogs on July 4!

Part of the charm of the Cinch is the eclectic nature of the place, both in its clientele and its décor. From the front it plays the part of an old west saloon, complete with swinging doors. And the way the entrance looks, as well as the description of the bar in guides, has confused many a tourist that comes in the bar expecting a gay Country and Western saloon.

Having been around as long as it has the bar has collected a large number of its decorations from former patrons, including a first edition Lion's Pub poster, complete with the genitals that were removed in later editions. Behind the bar you'll notice photos of some of the former patrons as well. And the collection continues to grow. Recently they received a large number of bar matchbooks and buttons from historic gay bars in the neighborhood which will eventually be displayed in the bar. And a recent addition is a large painting of a former unidentified Haight street gay bar - reputed to be an after-hours joint as well.

The bar has remained much the way I remember it when I first visited. The Mexican paper flags which once decorated the ceiling of the bar have been replaced with similar laminated flags in the hope they will last longer. The eclectic nature of the decorations harken back to the first decade that the bar was open, and will remind you of the simpler low tech era of the 1970s. Robby Morgenstein reflected on the spirit of the place, saying that in a way the Cinch has always been the Cinch and that owners are really just caretakers of the spirit of the place.

Certainly part of the draw of the space is the back patio of the bar. "There are bar people and there are patio people," Bob Thornton reflected. This is indeed my experience, as I've seen a number of people, visitors and longtimers alike, gravitate to the space. It draws enough of a clientele that I have visited the bar during the rainy season and still see a hardy band under the awnings which protect the patio in the winter. There have been changes in the last few years. Due to condos in the neighborhood, the patio now closes at 10pm. But that doesn't seem to have made the space any less lively.

Perhaps part of what has kept the bar going so long is that although it does feel homey, it doesn't feel like it's a relic of the past. There is still a lot going on at The Cinch, including raffles and benefits for organizations like the Imperial Court and AIDS/LifeCycle. Since they don't have an entertainment license, there are no bands or DJs. But it isn't missed because of a lively jukebox which allows patrons to select their own soundtrack.

The drinks have evolved with the times as well. Gone is the Long Island Iced Tea in Mason jars -which were a lethal feature of the bar in the 1980s. But they're still making amazing Bloody Marys, and drink specials are featured both on menus on the bar and the chalk board behind the bar. Monday features drink specials for 'Service Industry Night' and Wednesday is 'Combo Drink Special' night. Stop by; in no time, you'll be sure to feel like you're with family.