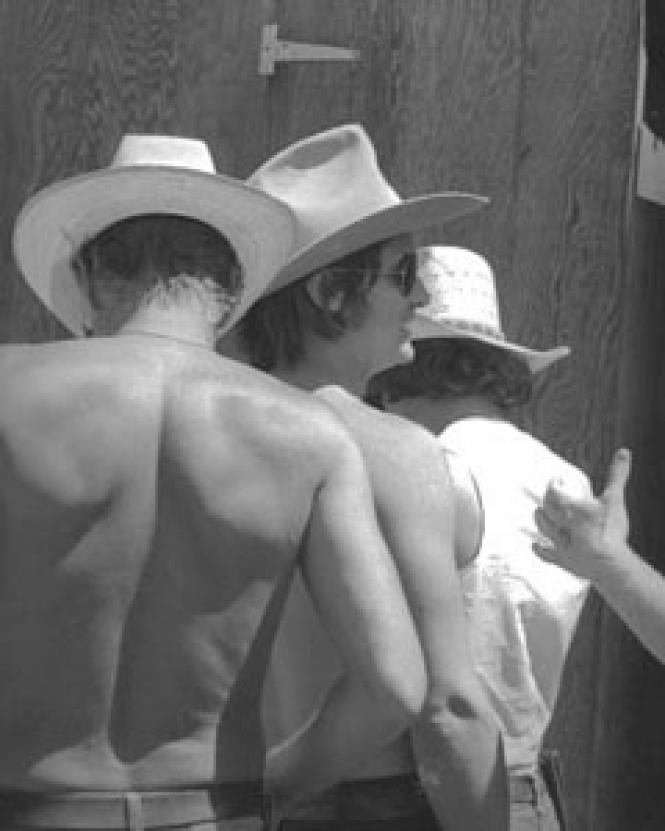 "Decided which one you want?" I said.

Four parade cowboys in sweat stained fancy shirts reined in their horses. Wes and I were in Guerneville outside the Rainbow Cattle Company at 16220 Main Street. The Cattle Company was the new kid in town. An ex L.A. cop and his partner opened it that summer of 1979.

"Yeah, which buckaroo's going to ride you tonight?" I said.

Wes blushed. I realized it was more sunburn than blush.

"You better cover that head," I said.

"Got nothing to cover it," he said.

I took off the Stetson I'd picked up in Wyoming and plunked it on Wes' red skull. "That ought to help," I said. "Here, get us a couple more beers." I handed Wes some bills and tied my blue hanky around my head. We both had new jarhead haircuts.

When he came back with the beers I saw he'd rolled the brim of the Stetson a little to make it fit better. It looked hot on him. Gave him a little character, a little attitude.

The parade over, we stepped into the cool dark interior of the Rainbow Cattle Company. It was packed. Weathered barn-wood covered the walls, adorned with a few Western artifacts and beer advertising. Stools lined the long bar. A pool table stood on one side. Two gambling machines the ABC declared illegal faced the wall. A cigarette machine and jukebox completed the decor. I stepped into the head. The stool busted up by redneck rowdies had been replaced.

I drove Nelly Belle, my GMC pickup, down River Road to the sun-burnt rodeo grounds near Duncan Mills. Shirtless attendants signaled where to park.

Sometime between the barrel races and the bucking bronco contest Wes left for the field toilets at the far end of the grounds. He finally came back.

We both worked at the Russian River Lodge. "Uh, I might be late." He looked out from under the now thoroughly re-shaped brim of my cowboy hat with a shy little grin. I knew the Stetson was his now.

"Thanks," Wes said. He started back toward the parking area where I saw a rusted van, its engine running, waiting by the exit.

After the last race was run, and the final prize awarded, I started back to my truck. I pulled the do-rag off my nearly shaved head and wiped the sweat from my face.

"Hey Slim," I heard behind me, "what happened to your hair?"

I turned and saw a shirtless man with a black braid down his brown back running to catch up.

"How about a ride?" he said. I couldn't place him.

"Where you headed?" I said.

"Wherever you want," he said.

I may have lost my Stetson that day, but the hottest man from Sonoma County's Dry Creek Reservation was sitting next to me in my GMC pickup.

After thirty years the hottest cowboys and hunkiest bears still hangout at the Rainbow Cattle Company on Guerneville's Main Street just up the road a piece at the Russian River.