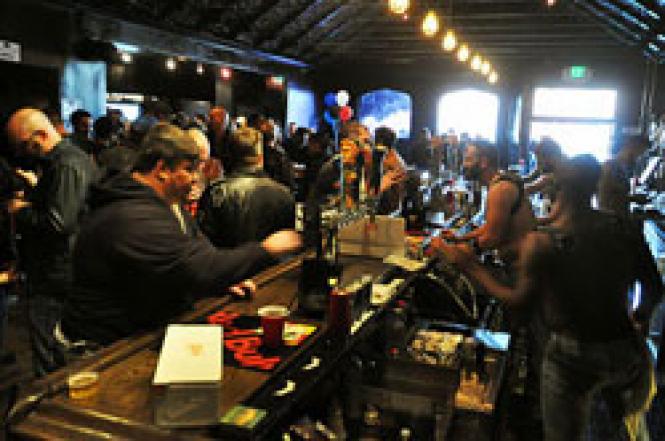 The Eagle shut down in April 2011 after a rent dispute between the former owners and the landlord. In September 2012, the new Eagle owners Alex Montiel and Mike Leon paid $250,000 for the 10-year lease, with an option of going for another 10 years. So, hopefully the threat of a high-rise condo or conversion of the venue into yet another straight hipster bar may never come to true.

With the well-timed Mr. San Francisco Leather events holding parties, and the extra leathermen and women in San Francisco for the festivities, the opening weekend was a hit. Saturday's crowd took in the redesigns, and opinions were overwhelmingly popular.

Bartender Gary has worked at the old Eagle for 30 years. Since many patrons were awaiting drinks, his summation was succinct: "I like it."

One of the delays that the new owners faced were needed roof repairs. The rebuilt roof, whose inside is painted black like most of the walls, recalls the barn-like awning of the venue's historic past as a carriage house.

The once-central U-shaped bar has been removed and replaced by a long strip on the east end of the front room. The front doorway no longer has the foyer and shelf, nor the leather tarp. It's simply a streamlined door and open entryway.

Among the other updates are a wheelchair-accessible bathroom, placed where the former small shop used to be. The other outside urinal trough and inside toilet (up three steps) are not accessible, but retain their ... ahem, cruisy ambiance.

Stripped of their many wall adornments, the space has a more serious air to it, but offers more open space.

Outside, the patio remains nearly the same. The tree near the indoor/outdoor bar was dying, so it was cut down, and the circular wooden bench removed. However, the ivy growing along the west wall, and a large tree, remain.

Alex, visiting from Fort Lauderdale, had been to the Eagle before the renovations: "It's awesome," he said of the new design. "I really like what they did with the front room. It's great."

His friend Jeffrey said, "I'm really excited by how many people are here. It really assures me that we can support a gay bar in this town."

Their pal Bob, when told of the historic drag bar Marlena's closing that same weekend, offered a philosophical perspective; "When one door closes, another one opens."

During the Eagle's hiatus, community members organized talks, fundraisers and "outlaw" events, including the popular Eagle in Exile events at El Rio. Glendon "Anna Conda" Hyde led the efforts online, at meetings and events. Hyde is also a member of the city's Entertainment Commission.

One of the bar's most popular days was, of course, the Sunday Beer Bust. After its celebrated re-opening, the bar's first Sunday on March 3 saw lines around the block and hundreds of patrons.

And while the bar's website is still a bit slim on content, the schedule is pretty simple. Along with Sunday beer busts, Thursday nights will include music. Women's nights are planned, and drag events organized by Anna Conda commence on April 6.

Also on the website (www.sf-eagle.com) are links to buy the bar's new T-shirts that feature a winged eagle in stylish white, with a silver ring on a black tee. On opening weekend, the entire staff wore shirts with the new logo.

"It's so strange wonderful to be back," said one patron, Dave. "People are just roosting right back where they used to."

As the two owners stated on the bar's Facebook page, " "It has been a long journey to get us to where we are today, but we know that we could not have done it without you, our amazing community, who have stood by us from the beginning."