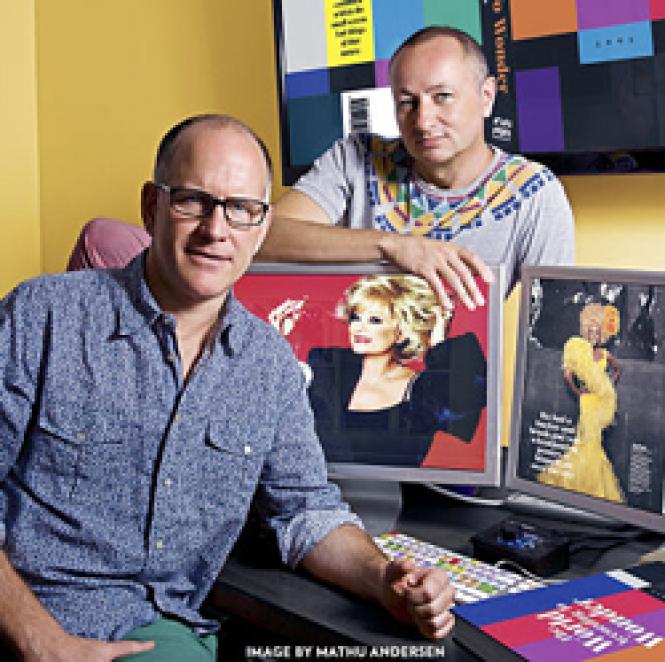 These words, chanted by Macauley Culkin as (eventually murderous) club promoter Michael Alig in the dramatized version of their own documentary "Party Monster," might be the major themes of the works of director-producer-writers Fenton Bailey and Randy Barbato.

Note the 'might be.' The vapidity of celebrity culture could be easily dispensed with in their dozens of reality shows, films and documentaries, if it weren't for their persistent loving gaze and underlying respect for the humanity of even the most extreme fame whore.

To slow things down in an appreciation of their two decades of accomplishments, Bailey and Barbato spent the last three years -in between developing even more hit shows and producing more acclaimed films- to produce "The World According to Wonder" ($110, 390 pages).

With nearly 300 original portraits of pop culture icons ranging from Elvira to Pam Anderson, John Waters to Sharon Needles, the WOW book lives up to its packaging as being "Eight Pounds of Fun!" It's the ultimate gift for the real estate porn/reality/drag show queer cineaste on your Valentine's Day list.

The two gurus of culture spoke from their offices in Los Angeles, saying they have been recruiting talent and subject for a while.

With the majority of photos in the colorful (and heavy!) art book shot by famed fashion photographers Mathu Andersen, and the duo Idris Rheubottom and Tony Craig (www.idrisandtony.com), the WOW book pops with pop appeal.
"There are a lot of exclusives," said Bailey, noting that the majority of images are by main contributors Anderson and Idris+Tony. Most of the RuPaul and drag photos are by the on-set producers "just for logistics; it was easier."
"And except for the Tammy Faye Bakker," Barbato added. "We used the Greg Gorman shots for Tammy, because she had passed."

The late mascara-thick televangelist wife's gay son is also featured in the book. Bakker, the subject of the acclaimed "Eyes of Tammy Faye," serves as a perfect example of the seemingly odd admiration two gay men would have for a conservative Christian whose empire turned out to be a complete fraud (and whose theme park now more resembles Chernobyl in its abandoned decay).
But Bailey noted how the late Bakkers deserve a bit of respect, particularly for their media savvy.

"Jim and Tammy Faye were very prescient about television and its impact," said Bailey.

"The station that she and Jim founded, what they became, is fascinating. They understood the power of TV and opening yourself and revealing yourself."
Added Barbado, "Technology has democratized the medium of celebrity. Technology enabled a lot of art and fringe characters to rise up. Pre-internet and pre-cable, before the democratization of media, there were these gatekeepers that dictated who would be stars and who we would get to listen to and read. But I think people's appetites moved beyond that small narrow area that was dictated by old school media gatekeepers."

Bailey commented, "We were living in the screen age, which began with Hollywood. What's happened is that the screen has multiplied. The screen is the iPhone and iPad screen, so there are faces that are beyond the old guard Hollywood stars who were used to having all the attention."

Take Jodi Foster, for example. Her recent Golden Globes Cecil B. DeMille Award acceptance "coming out/not coming out" speech, considering either groundbreaking or resentfully smug, depending on your perspective, led to comparisons of the "low" form of celebrity, Foster's reference to the star of the reality show "Here Comes Honey Boo Boo" (not one of WOW's project, by the way).

Of that event, Bailey had a comment of admiration: "Honey, you shrunk the stars."

But all that got upstaged by dashing actor Victor Garber's much more casual coming out (again) and a media flurry of pictures of his handsome partner of many years, Rainer Andreeson.

The onslaught of bits and bytes is categorized and posted on their blog, The WOW Report (www.worldofwonder.net). A bevy of contributors take on the day's zeitgeist moment, from their own house promos ("RuPaul's Drag Race," etc.) to celebrity animated "gif shops," retro music fun, nightclub events, design innovations, and even a questionably altered image of Ryan Gosling at a urinal (we wish it was real).

Two pop gurus met on common ground with this writer, New York City's East Village, the Pyramid Club, to be specific. Back in the early 1990s, before cell phones and tweets, it took flyers and good old word of mouth to enjoy the cultural phenomenon of My Comrade, Star Booty (an early RuPaul character), Dee Lite and ACT UP Queer Nation chic.

Then New York University students, Bailey said, "We were captivated by it all. We saw this incredible exuberant creativity. It was beyond the scope of downtown, but it was ignored in other scenes."

Eventually, such underground scenes rose to the mainstream. Said Bailey, "It's the nature of pop culture; an insatiable machine that wants the new face, new stars, new scandals. Sooner or later, what's on the outside is going to drift toward the center."

The World of Wonder isn't all glitter and drag queens. Among their many accomplishments are serious Emmy-nominated (and winning) documentaries about gays in the military ("The Strange History of Don't Ask, Don't Tell"), transgender children of celebrities ("Being Chaz") and the fragility of the ecosystem ("The Last Beekeeper").

The process of convincing real people, not familiar with the spotlight, or those celebrities who've already been dashed on the rocks of fame to once again face a camera, is part of the nuanced work of the team.

"There's a difference between revealing and exposing," said Bailey. "Revealing yourself and sharing is the purpose of media. At one time it used to be an actor playing a role. Now it's about revealing and being oneself, like Chaz Bono, someone who grew up in the spotlight. Even he could realize that for people to understand, telling his story was the best way to go about it."

But how do they get those shows and films produced? Bailey explained that the World of Wonder, not unlike a drag or music "house," is a collective of "all these amazing people, great producers, directors, photographers; we're just surrounded by talent, and not just the people we point the cameras at."

The book is self-published, and the duo and their staff spent a lot of time on what is a deliciously visual tome.

"No one reads anymore," Bailey half-joked. "We thought this would be the ultimate non-trendy thing. Also, the book is about continuing the love and pointing the camera at all these people who make up our world of wonder," said Bailey. There's potentially more to come, as the duo mentioned that about 50 other performers and artists got edited out of the book. "So this is probably just Volume One."

What else is coming up for the prolific pair? The new season of "RuPaul's Drag Race" promises more wild gown-shredding fun. "It's the show that keeps on giving," said Barbato. "It's got legs."

The duo are also developing a series about La Toya Jackson for the Oprah Winfrey network, and a reality series about Jaye Bakker. The popular Million Dollar Listing will expand to other cities. And a documentary in development explores the entire phenomenon of celebrity itself, based on the duo's early years as part of a fledgling pop band.

"Most bands, like ours was, are hugely unsuccessful," Bailey confessed. "We've been trying to do something about fame. But it's such a broad subject. So, we'll tell our story as a sort of parallel experience with friends (like Pet Shop Boys) who became successful."

In the meantime, look and listen for Fenton and Randy on Andy Cohen and Michelangelo Signorile's shows. And enjoy their new book, which is doomed to succeed.

Eyes of Tammy Faye: dramatic adaptation of the televangelist documentary