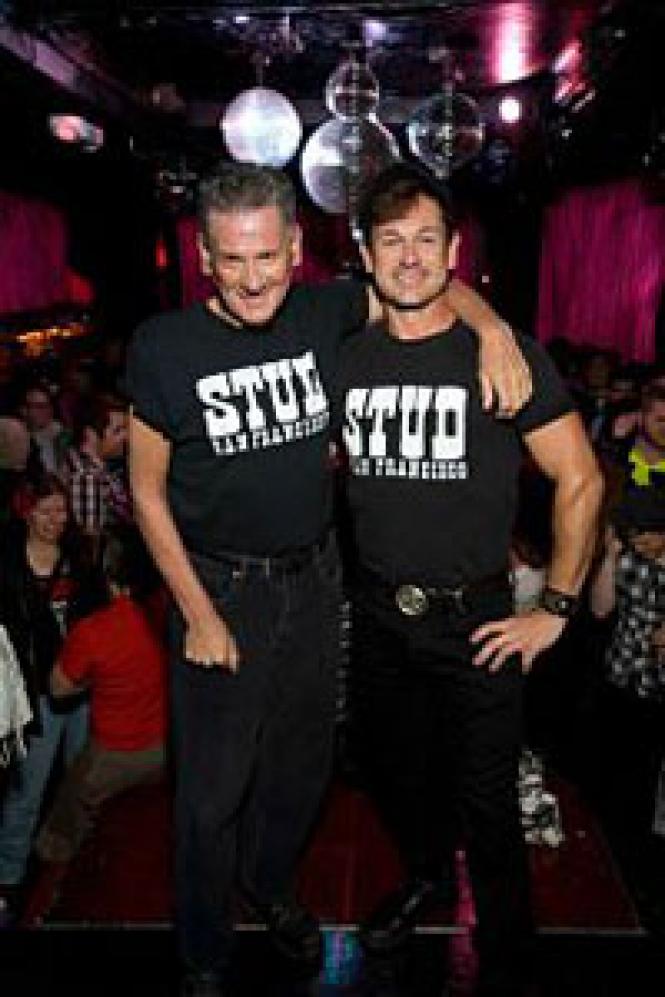 How does a gay bar remain successful through the years? The Stud's two co-owners talked about their lengthy history managing one of the nation's oldest gay bars, which is celebrating its 45th anniversary this month.

The Stud Bar opened in 1966 as the early gay and hippie movements in San Francisco culture took hold. Originally a leather bar with a psychedelic Chuck Arnett wall mural, although it moved in 1987 (from the venue now known as Holy Cow) its current space, formerly The Arena, is also historic, having hosted the first Bare Chest Calendar contests in 1984.

Ben Guibord, a current co-owner, has been working at The Stud since 1977, "almost 35 years, which are the best years of my life; almost half my life, actually," he said.

Guibord started from the ground up, literally. "I started by sweeping the floors," he said. "Owner Jim Fleckstein was new, too. Both of us learned the business together." Guibord became secretary of the corporation, and has also been a DJ.

The 1987 move from the Folsom St. address stemmed from the landlord demanding a percentage of the bar's income. When Fleckstein died and his estate was finalized, The Stud bought itself back from Fleckstein's heirs a few times. Guibord has been the co-owner for two of those transactions, since 1977.

The Stud team decided to find a new home, and considered venues where the Ambush had been (across the street from the Lone Star), as well as the current location of Slim's on 11th Street. After moving to its current location on the corner of Harrison and 9th streets, Guibord said June 16 became the bar's anniversary.

Like Guibord, Michael McElheny started doing basic work, later becoming a co-owner in 1996. Guibord said, "We were just happy to get our paycheck, to own our jobs. Michael and I aren't about making a huge profit. With current times, we're very fortunate to own jobs."

How is it that The Stud, unlike so many other bars, has lasted 45 years? "Stick with it!" said Guibord. "If you believe in it."

For McElhaney, co-owning a bar was an adventure after moving to San Francisco from Hawaii in 1989. He still lives there part time.

"I was super naïve and I was only 28 when I'd bought into the Stud," said McElhaney. Starting as a cashier in 1991, and then a doorman, McElhaney was dating the manager at the time, and "in a fit of nepotism, he gave me his job," he said. "I was thrown into bartending."

Before they undertook managing the bar, which went into probate, "A whole group of people bought it and kind of annihilated it," said McElhaney. "It made me sad to see that. So I asked one of the owners, would you like to sell it? He made and offer, and we took it. We were like, 'Let's do this. Let's have fun!'

Fresh out of art school, the charismatic McElhaney landed a large bank loan and started improving the space. "The previous owners had stripped the place," he said. "They left one disco ball and one pin spot." After its first four years, under their ownership, the bar's debts were paid off.

Serendipity, and a lot of hard work, played a role in the bar's resurgence. "Ben and I both have June 24 birthdays, which is also near the bar's anniversary," said McElhaney. "When we took legal ownership, it was also on our birthdays, too."

The bar's most famous weekly night, Trannyshack, began as Singing for Suppers, a fundraiser for food programs for AIDS/HIV patients, which McElhaney supported by decorating the bar and promoting it. "I love drag queens, and Trannyshack quickly took off." After eleven years with numerous celebrity appearances, host Heklina moved Trannyshack to other venues, including its current monthly events at DNA Lounge.

New Wave Mondays became one of the most popular nights of the week in the '90s. After Trannyshack and Sugar left the bar, Guibord said they had to start relying on event promoters. Diverse nights like Glitterbox and Guilty ranged from goth to gay to drag to bear events. Current variety shows like Meow Mix and Friday's Some Thing bring in fans of wild stage acts, while Big brings the large men, and Frolic attracts those who like to party in animal costumes.

"We like a diverse crowd, with shows going on," said Guibord, who added that the recent closing of The Eagle Tavern, as well as ongoing problems faced by bar owners, has had an effect. "The more bars there are down here, the more traffic there is," he said. "Less opportunity means less people. At one time in the '70s, there were more than 100 gay bars and about 20 bath houses."

Having endured those glory days, McElhaney remains hopeful yet cautious about the future of gay nightlife in San Francisco, admitting that he has no business model, "just 13-hour days; whatever needs to be worked or fixed, we worked it daily."

Stud co-owner Michael McElhaney serves up a few drinks. photo: Georg Lester
But the scene has certainly changed. McElhaney points out "a culturally-based shift away from the inclusive oddity and fun of nightlife, as well as the kick-back style, where no one cares what you wear. Eccentricity and engagement are not seen as important anymore. Clubs now tend to be a little more cookie cutter, more mainstream."

When not managing The Stud, McElhaney fulfills his preference for unusual entertainment by performing with a belly dancing troupe on occasional Fridays at Kan Zaman Restaurant (1793 Haight St.).

Although The Stud has been supported by independent events, "The reason you have the whole monthly or quarterly club is because there isn't enough support for certain nights to be weekly," said McElhaney. "Communities have become fractured and disparate. People want to focus on what they want, as opposed to coming out and not knowing exactly what's going to happen."

McElhaney is aware of the fickle nature of his business. "The Stud's been this raging spot, then it has to go into a little hibernation for a while to refresh," he said. "We want to do a re-invent, where it's still got its soul. People want a little more meat and substance, and I think we can offer that. Some people just want some muscle-head in a jock strap behind a bar. Some people want to have a conversation, or are looking for more of a substantive experience, not just 'get drunk, go home with someone.'

"Of course, I've done that, too," McElhaney smiled. "But I'm selective."

So, how do they maintain a historic venue for all patrons?

"We still have years on our lease and thankfully our landlord has been a wonderful person. We have an awesome staff that we adore," said McElhaney. "What The Stud has been about is celebrating and maintaining the diversity for men, women, gay, straight. To get to 45 is good."

The Stud's 45th anniversary party is Thursday, June 23, 399 9th St. at Harrison. For ongoing and special June events at The Stud, go to www.studsf.com