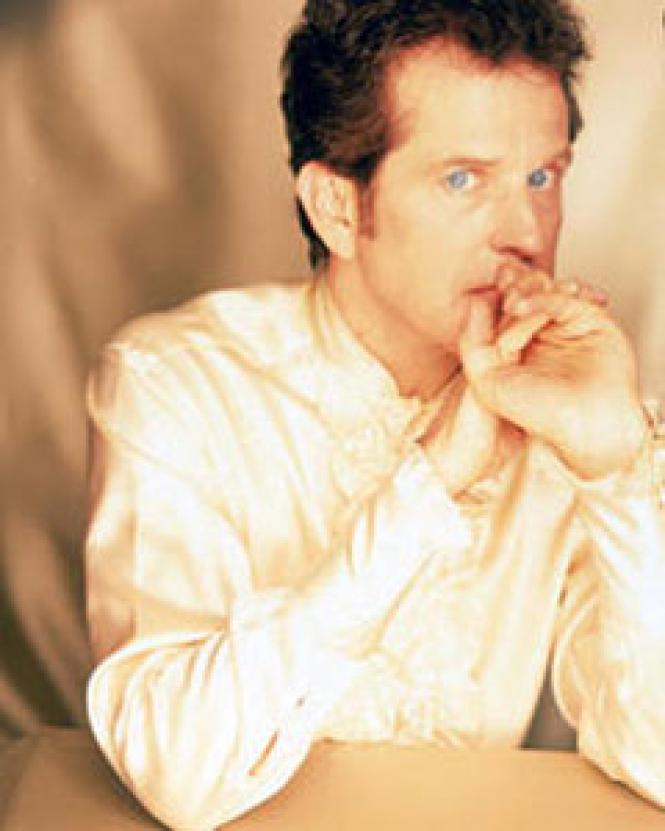 Kristian Hoffman has collaborated with some of most unique gay musical artists of our time, from Lance Loud to Klaus Nomi and Rufus Wainwright.

Recently, his work with America's Got Talent star Prince Poppycock led to new accomplishments. The veteran composer and singer's recently released CD, the succinctly titled Fop, includes songs that Hoffman will perform with yet another longtime collaborator, Ann Magnuson, at the latest local installment of The Tingle Tangel Club, Thursday March 31 at Café du Nord.

"I've always had a penchant for the ridiculous," said Hoffman in a phone interview from his Los Angeles home. "I met Ann Magnuson in the early 1980s when she was doing New Wave Vaudeville shows in Manhattan. She was going to be a theatre director for short routines, and ended up producing a show. I met Klaus Nomi at that first show. I was doing a very outré version of "Society's Child" in a Ku Klux Klan outfit."

Since then, Hoffman and Magnuson collaborated on several projects, including the 1978 The Bleacker Street Incident, a folk parody band (which preceded the Christopher Guest folk parody film A Mighty Wind by decades).

"We played all sorts of venues in New York and LA through 1984. Back then, Ann had lots of club-owner friends who would let you do wild stuff."

Hoffman was also an integral part of the 1980s New York club scene, including The Pyramid Club, and the daring Area, where monthly theme parties were the rage. One night, Hoffman said, "We did a post-nuclear act in hazmat tents with lots of fog. It was really fun."

It was Magnuson's show that led Hoffman to meet the mysteriously enchanting Klaus Nomi. The German operatic counter-tenor, whose robotic Bauhaus costumes and unique vocals won him instant attention, had, at the time Hoffman met him, yet to form a band or develop a repertory of songs.

With Nomi abruptly promoted to headliner at Magnuson's first variety show, the next day, while Hoffman had ongoing gigs with The Contortions, a brief conversation led to what became one of the most memorable collaborations in New Wave music history.
"I told Klaus, 'We'd like to make a band for you,' and he said 'Okay.' That's just what it was like back then. But it worked. He picked the classical music and I picked the pop songs."

Hoffman's compositions for Nomi include "Total Eclipse," "After the Fall, "Nomi Song" and "Simple Man." Hoffman also arranged the songs "Lightning Strikes," "The Twist", "Just One Look" and "Falling In Love Again."

Fop of the Pops

Understandably, theatre has long been an integral part of Hoffman's career. His latest music videos from his Fop CD include retro-Vaudeville-themed scenes shot at The Magic Castle, an old theatre in LA's Hancock Park district.

"They re-opened it as a club a year and a half ago," said Hoffman. "It's where Orson Welles performed his magic shows, and Rita Hayworth and other celebrities would get drunk there."

"We met about four years ago," said Hoffman. "He approached me on MySpace while he was listening to some music by The Mumps. He wanted me to play the piano and a few of my songs. I just imagined he was some sort of cancerous old queen. But he was the most beautiful boy I'd ever seen."

Since then, they've been working on music together, and Quale, out of his princely drag, even performs as a hunky Jesus in one of Hoffman's more irreverent videos, "Hey, Little Jesus."

Of Poppycock's near-victory on the talent show, Hoffman said bluntly, "He was robbed. They always default to the safe acts for the winners."

That same foppish quality that brought Quale's act such acclaim is evident in Hoffman's CD.

"That was the point of Fop," said Hoffman. "I wanted to make the record that was artistically extravagant, with a fabulous resplendence. It's a style that's not particularly respected these days." The CD cover art features a young boy in a flowing dress.

"I was trying to make it extravagant to counter our times," Hoffman said. "Even President Obama hasn't made much of an improvement. We live in an era where art is held under suspicion. People are living in fear and living in their cocoons. I thought, what better time to say that the superficial is the divine? I want to out myself to everything gorgeous, the exact opposite of the status quo."

Like his previous work, Hoffman's music has a deeper intent. "Fop is a pejorative word," he said. "I want to reclaim it as a badge of honor. It's a revolutionary stance to be an advocate in an age where beauty is thought to be as dispensable as gay people are."

With the upcoming release of Cinema Verite, a dramatic film adaptation based on the travails of a documentary film crew that produced the groundbreaking PBS series An American Family, yet another aspect of Hoffman's illustrious career has come full circle.
As viewers watched the then-shocking collapse of a seemingly perfect Santa Barbara family, many gay teenagers watched in fascination as one of the family's sons, Lance Loud, came out as gay. Loud also started a fledgling rock band, The Mumps, and Hoffman was its keyboard player, guitarist and co-composer.

While discussing his history with the Louds, Hoffman shared a bit of inside gossip.
"Apparently, the filmmakers were going to produce the film without the family or filmmakers' consent," he said. "I think that'll be straightened out, but it was almost like they treated them as if they were already dead. The script is much more about the process than the family."

Hoffman said that there probably won't be a fictional version of himself, or the Mumps, in the new film, which focuses more on the parents and the documentary's director. Asked why the pivotal 1973 PBS show, considered the first reality show ever, isn't on DVD, Hoffman explains the reason simply. "The original filmmakers and the family hate each other." Thus, DVD rights remain in limbo.

Of his time as a youth with Lance Loud, Hoffman said he had no idea of the long-term impact they were creating.

"When you're in the middle of making something, you don't think about it. We didn't think we were dressing gay. We were dressing like rock stars. But looking back, we were obviously gay."

Hoffman is well aware these days of Loud's, and his own, cultural significance. "I've had lots of people come to me and say, 'You and Lance gave me the strength to be who I am.'"

Perhaps that's part of what continues to inspire Hoffman, whose graphic illustrations for albums include a wide array of pop artists.

"I think there could be people out there like Klaus yet to come," he said. "But there isn't a machinery in place to nurture them. I like Lady Gaga, but her music is based on a corporate sales focus. She could take it to a new level. I do, though, appreciate that she's a big gay rights activist, using her pulpit for good."

Despite his glamorous history, Hoffman lives a mostly normal life with partner, playwright Justin Tanner. While the September 2010 release of his CD was met with acclaim, Hoffman finds himself decidedly outside the mainstream music industry, yet an independent success. "The world is being generous to me."

With two more music videos in the works, Hoffman seems destined to continue breaking new ground with his fabulous flair.

"I feel very blessed," he said. "Opportunities continue to present themselves."