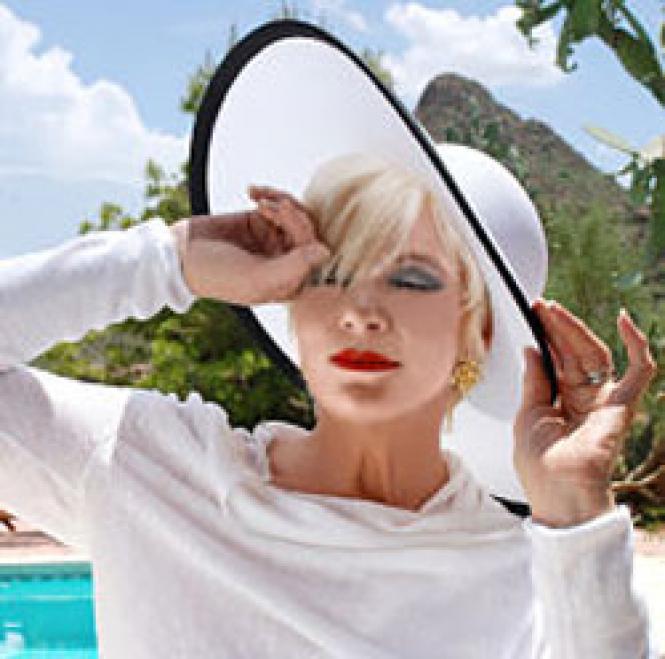 She was the counter-culture "It Girl" of the glam rock '70s. She helped craft the style and image - and was married to - one of the greatest icons in rock music history. And now Angie Bowie is coming to San Francisco for the Trannyshack David Bowie Tribute on Friday, March 18.

Forty years after changing the face of pop culture, Angie Bowie is still going strong, as I discovered while chatting with her from her home in Tucson, Arizona. "I just got back from L.A. where I was recording my new album Una Ves Mas with Chico Rey," she tells me. "It's got a lot of dance, house, club and tango style music as well as spoken word and festival anthem type songs."

The Puerto Rican born Rey, who was performing with Carlos Santana at age 17, will join Bowie for her San Francisco gig to give us a taste of her new music. "It's a double album with 18 tracks, so there should be 18 singles," she says. "I don't record B tracks."

But which performer does the envelope-pushing rock icon admire today? One guess. "I like Lady Gaga. She's an interesting performer who's visually exciting and the music's fine. If I was in a club I'd dance to it." She also appreciates Gaga's carrying on the early '70s spirit of civil rights for gays. "Those chores are never finished. It's nice when someone new comes along and you can say 'Great, now you do it.'"

The author of the books Bisexuality: A Pocket Guide and the autobiographical Backstage Passes, Bowie is finishing up two new works: Lipstick Legends and Pop Sex, which she describes as "a nutshell overview of the history of sexuality."

After eight years of research and a 1000 page draft, Bowie has whittled Pop Sex down to a more manageable 300-400 pages. "It's amazing how different kinds of sexuality have been embraced or abandoned by different cultures over the years, and the weird dynamics that have changed people's attitudes. But it's a good read - and it's funny."

Born in 1949 in Cyprus to American parents, Mary Angela Barnett (Bowie's maiden name) attended boarding school in Switzerland and then The Connecticut College for Women, where a pivotal experience changed her life forever.

The sexually precocious teen had a lesbian affair with a schoolmate that resulted in both of them being imprisoned in the school infirmary. Bowie escaped by jumping out the second story window. "I thought to myself, 'I think I'll leave,' but my girlfriend spent four years at the Yale Psychiatric Institute being told she was a weirdo. That experience affected everything that happened later."

Bowie headed for the avant-garde scene in London where she finally felt at home. She met and fell in love with fledgling rock star David Bowie in 1969 when she was 19 - and the rest is rock and roll history. She shared her uber-glam rock look with him, introduced him to talented eccentrics, and the two married in 1970.

Although their split in 1976 was not amicable, they bore a son whom they famously named Zowie (now the film director Duncan Heywood Jones) and Bowie remains proud of what they achieved together. "We put together an amazing company to handle a fantastic artist. It was an exciting time. We built it, formed it, and made it happen. It was my first big marketing job."

"They asked me to work on the film, but then they never came back to me, so I assumed it was a work of fiction. I saw it and I thought it was fine, but I was never paid for it or felt it was a theft of intellectual property. I thought the soundtrack was so good that I didn't pay much attention to the story. It was like an enormous video with 12-15 songs."

I can't help but ask her for the real story behind the Rolling Stones' song "Angie," that was long rumored to have been written about her. "There's no story whatsoever, love," she says. "I used to joke that Mick wrote it for David." (The two were, ahem, close.) "But Keith Richards wrote the song and he has a daughter named Angela. That's the story."

"For years they always played it when I came on stage or on TV and that's fine. I would've preferred if they'd played 'Prettiest Star' or 'Golden Years' which David wrote for me. At least those are the songs he wrote about the good times," she laughs.

Although she hasn't seen her iconic ex-husband in 30 years, Bowie has been with her partner Michael Gassett for the past 18 years. In addition to her writing and music projects, Bowie has been active with AidsBeGone, the organization she founded to help find an AIDS vaccine (www.aidsbegone.org).

How does she feel about returning to San Francisco for the first time in 13 years? "I'm looking forward to it!"