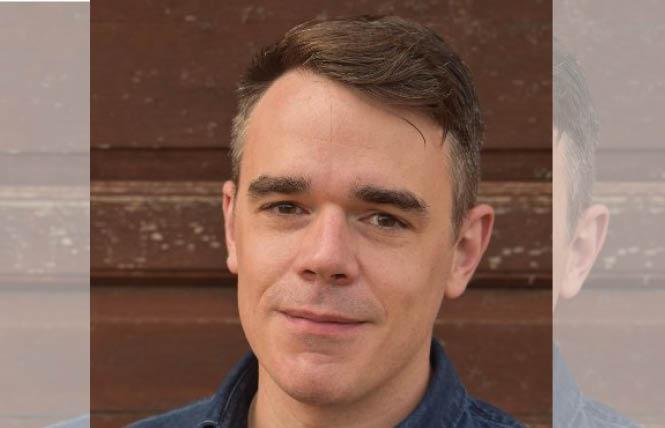 Journalist Michael O'Loughlin's new book, "Hidden Mercy: AIDS, Catholics, and the Untold Stories of Compassion in the Face of Fear," will be published in November. Photo: Courtesy Twitter

A journalist has written a new book on how LGBTQ Roman Catholics responded to the AIDS epidemic, as part of his ongoing historical research on the topic.

Michael O'Loughlin, 36, a national correspondent for America Media: The Jesuit Review of Faith & Culture, already hosted the eight-episode podcast "Plague: Untold Stories of AIDS and the Catholic Church," which America Media dropped in 2019.

Now some of that reporting is being repurposed for "Hidden Mercy: AIDS, Catholics, and the Untold Stories of Compassion in the Face of Fear," which is being published by Broadleaf Books November 30.

O'Loughlin, who is gay, decided to research the topic several years ago, visiting San Francisco before the COVID-19 pandemic. He said that many stories of how both LGBTQ and non-LGBTQ Catholics responded to the AIDS epidemic are in danger of disappearing, and he wanted to tell them to a new generation.

The story of Cliff Morrison, a nurse who helped create Ward 5B at San Francisco General Hospital in the 1980s as a humane and compassionate place to care for people with AIDS, is featured in the book.

"Oh my God, it's been several years," Morrison told the Bay Area Reporter, regarding when O'Loughlin interviewed him. "He came to the venue for the film '5B' and we went to the conference room and he interviewed me."

"5B," which came out in 2018, tells the story of the ward. O'Loughlin told the B.A.R. that the film doesn't cover much of how Morrison was influenced by his faith.

Also in the 1980s, Morrison, along with the Reverend Tony McGuire, had helped transform Most Holy Redeemer — which had been a Catholic parish in the predominantly European ethnic Eureka Valley neighborhood since the turn of the century — into a welcoming place for LGBTQ people.

Along with longtime parishioners, Morrison and the then-small number of gay men who'd joined the parish began outreach in the Castro. An AIDS support group, which still exists today, began in 1985.

Morrison told the B.A.R. it's important these stories be passed down.

"For me, I think it's important we have historic documentation and we keep issues like this alive and in front of people, so we don't have a situation where this can happen again," Morrison said, adding that he is "looking forward" to reading the book.

Nuanced portrait of church hierarchy
While reporting the heroism of gay Catholics and Catholics who accepted them and people with AIDS, the book offers a nuanced portrait of members of the church's hierarchy, such as then-archbishop of San Francisco John R. Quinn, who was supportive of McGuire's outreach but who still banned the LGBTQ Catholic group DignityUSA from using St. Boniface in the Tenderloin for its masses.

The book reports that the B.A.R. wrote an editorial criticizing McGuire for rescinding an invitation for DignityUSA to meet at MHR back in 1983. "After denying Dignity, the gay Catholic organization, the use of your church (even though it is as much theirs as yours — as only God is the landlord), it is but the next step to close down any outreach to Gay and Lesbian Catholics," the editorial stated.

"I interviewed a lot of people who thought that Quinn — though conservative on sexual ethics — seemed more interested in bridge building than his contemporaries, like [New York's] John Cardinal O'Connor," O'Loughlin told the B.A.R. "A lot of information about Quinn's role is new in the book; behind the scenes he was pressuring the Vatican to do more on HIV/AIDS ahead of Pope John Paul II's visit. I don't know if he [Quinn] was ever comfortable with it [homosexuality] — but he felt the Vatican's refusal to engage at all in a positive way was detrimental to a lot of LGBTQ people."

O'Connor, of course, was saying mass at St. Patrick's Cathedral in Manhattan on December 10, 1989 when ACT UP activists protesting his opposition to homosexuality and condoms disrupted the service with a "die-in," leading to mass arrests. (The incident was dramatized on FX's "Pose" most recently.)

Pope John Paul II visited San Francisco in September 1987, leading a mass of over 70,000 at Candlestick Park. The New York Times reported at that time that a 2,000-strong protest by "homosexuals, feminists, and some Jews" while he was visiting Mission Dolores was the largest of his trip.

The Times stated that then-city Supervisor Harry Britt, a gay man who succeeded gay slain supervisor Harvey Milk on the board, was there, and said "the pope has as lot to learn in San Francisco about humanness and trust and responding to people. We are not on trial. It is the church that must learn if they are going to be relevant in the century ahead."

The B.A.R. cover that week featured a papal mitre with the words "Gay is Good," exhorting readers to "Carry this message with you and use it to welcome the pope as he visits San Francisco this week."

O'Loughlin said that while many people know that then-President Ronald Reagan didn't give a major address on AIDS until May 1987, people are often not aware that the pope had not made a statement about it until shortly before his San Francisco visit, when he was asked about it by a reporter. At Quinn's urging, John Paul met with people with AIDS during his visit. After plans for the pope to visit them in the Castro fell through due to the idea being seen as a "photo op," the meeting happened at Mission Dolores.

O'Loughlin said he hopes the book helps to provide perspective for Catholics who in recent times have come to grips with their sexuality.

"As a gay, Catholic journalist working in the space I have, I have covered a lot of LGBT issues — what does it mean to be an LGBT person of faith — for over a decade," O'Loughlin said. "It felt new, like it hadn't been done before. People talked as though it was the first time gay Catholics were fighting for civil rights, but I knew that couldn't be true. I just didn't know the history, because it's not taught about in the pulpit of Catholic churches or in Catholic schools or in public schools. ... So I started asking people older than me: 'what was it like?'"