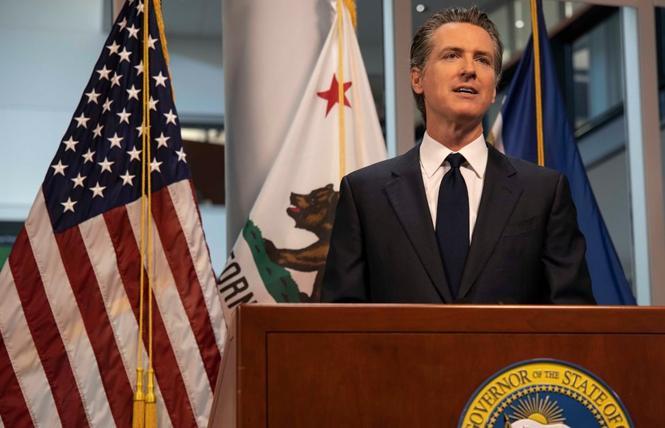 A number of bills signed into law by Governor Gavin Newsom will boost LGBTQ families when they take effect.

Newsom October 6 signed Assembly Bill 218 allowing Californians to update their marriage certificates and the birth certificates of their children to accurately reflect their legal name and gender in a manner that protects their privacy. Gay freshman Assemblyman Chris Ward (D-San Diego) revived the legislation after Newsom vetoed similar legislation last fall due to concerns it would inadvertently out transgender and nonbinary individuals.

Also signed by Newsom October 9, in his final actions on bills for the session, was gay Assemblyman Evan Low's (D-Campbell) AB 1084 requiring retailers with 500 or more employees to remove signs that say "boys" and "girls" in toy and child care sections or provide a gender-neutral retail section for the items. In a compromise to move the bill out of the Legislature, Low and co-author Assemblywoman Cristina Garcia (D-Bell Gardens) agreed not to include children's clothing sections in their bill.

In a statement, Low said he was pleased that Newsom signed the legislation.

"I'm incredibly grateful to Governor Gavin Newsom for signing AB 1084, which will bring California law up to speed with what many retailers have already realized: We need to stop stigmatizing what's acceptable for certain genders and just let kids be kids. My hope is this bill encourages more businesses across California and the U.S. to avoid reinforcing harmful and outdated stereotypes."

Also set to become law after Newsom signed it September 16 is AB 465 by Assemblyman Adrin Nazarian (D-Van Nuys), which requires professional fiduciaries to receive LGBTQ+ cultural competency and sensitivity training during their education and licensing process. Private professional fiduciaries provide critical services to older adults and people with disabilities, from managing their clients' daily care, housing, and medical needs to ensuring their bills are paid and managing their investments.

"Unfortunately, LGBTQI+ seniors face unique challenges as they age, and are among the most vulnerable population in our society. These challenges include barriers to receiving formal health care and social support that heterosexual, cisgender adults do not encounter. This new law will ensure that LGBTQI+ seniors get competent and respectful services by professional fiduciaries," stated Nazarian.

On September 23 Newsom signed AB 746 authored by lesbian Assemblywoman Sabrina Cervantes (D-Corona) to clarify the state's approval process for stepparent adoptions. It ensures couples seeking to have one partner become a stepparent are not required to be married or in a legal union for a minimum amount of time, or to have a specific income or education level, in order for the adoption to be granted.

The Southern California legislator sought the legislation partly to ensure LGBTQ people have equal access to parentage under the state's adoption laws. According to her office, because the state has imposed minimal requirements on couples looking to do stepparent adoptions, some county superior courts impose their own, separate requirements.

Cervantes pointed out that in some counties the courts have been requiring couples to be in a legally recognized union for at least a year before granting their adoption. They are doing so, she noted, even though state law does not require that couples must be married, or in a civil union or domestic partnership, for a minimum amount of time before seeking a stepparent adoption.

Another problem some couples have faced, according to Cervantes, is that in some counties the courts are demanding they verify their income level or education despite there being nothing in the law requiring such information from a couple seeking a stepparent adoption. Such a requirement, she said, can negatively impact LGBTQIA+ couples, especially those from historically disenfranchised communities.

"Much has been done in recent years to streamline the stepparent adoption process for our LGBTQIA+ community, but there is still much work to be done. Assembly Bill 746 continues our state's pursuit of that goal by prohibiting courts from imposing a minimum time for a marriage or legal union, or demand information on a couple's education or income levels, before granting a stepparent adoption," said Cervantes, who has triplets with her wife. "These requirements, which county court systems currently have discretion to impose, hinder and prolong the adoption process for LGBTQIA+ couples."

Updated, 10/9/21: This article has been updated to include a statement from Assemblyman Evan Low.