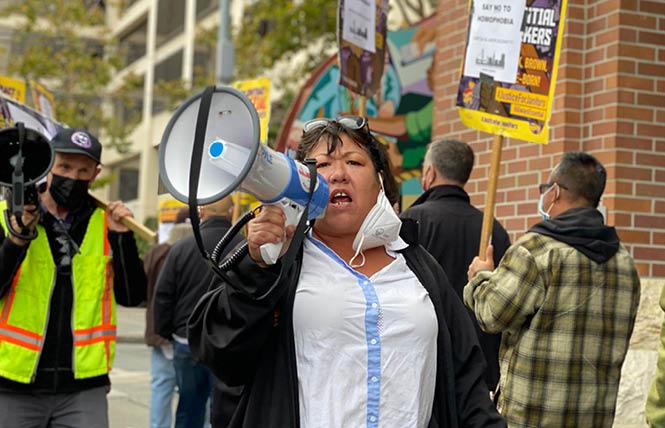 Kim Tavaglione, the interim executive director of the San Francisco Labor Council, leads a picket line outside of the waterfront Hotel Vitale October 7. Labor and LGBTQ activists, and a smattering of local pols, showed up to denounce a reportedly former contractor with the hotel's renovation project that was accused of homophobia. Photo: John Ferrannini

A San Francisco hotel is reportedly ending business with a contractor that labor and LGBTQ activists allege is not paying prevailing wages to workers — and subjected people to homophobic language.

The Blue Angels roared over the Embarcadero October 7 as protesters gathered at the site of the Hotel Vitale to make known their distaste for Centric General Contractors, a Brisbane-based company.

Until late October 7, Centric was working on renovations to the Hotel Vitale, which will reopen as 1 Hotel San Francisco when that is completed in January.

According to Rudy Gonzalez, a straight ally who is the secretary-treasurer of the San Francisco Building and Construction Trade Council, members of his group went to Centric's on-site location after finding out that "subcontractors and workers were not being paid prevailing wages."

"We sent our representatives down to investigate," Gonzalez told the Bay Area Reporter. "The guy told us to fuck off and called everyone a homophobic expletive, then grabbed his crotch and said 'you all can suck my dick because you're all you-know-whats.'"

The San Francisco Labor Council sprang into action, organizing a protest at the site of the temporarily-closed hotel.

Several dozen people walked along the picket line as Kim Tavaglione, the interim executive director of the labor council, led the demonstrators in chants, such as "What do we do when worker's rights are under attack? Stand up fight back!" and "Hey hey, ho ho, homophobia's got to go."

Tavaglione then began a cavalcade of speakers.

"Workers have been tormented by, shall we say, rude and homophobic language that no workers should hear in San Francisco or anywhere," Tavaglione said.

Tavaglione also drew attention to the labor movement's history in the neighborhood. The Embarcadero waterfront south of Market was home to the 83-day 1934 West Coast Longshoremen's Strike that peaked with the death of two International Longshoremen's Association workers on July 5, 1934.

The killings themselves led to the San Francisco General Strike, which stopped all work almost everywhere in the City By The Bay until the longshoremen's strike was resolved.

"Right across the street here is where workers from the ILW were shot in 1934," Tavaglione said. "This building was built with union pensions ... and they have not been paying fair wages."

Contractor reportedly out
Gonzalez followed Tavaglione, telling the crowd that the hotel called the labor council to say that Centric is getting fired as of 11:59 p.m. October 7.

Gonzalez said that the company nonetheless bid to do work at the Sir Francis Drake Hotel in the Union Square neighborhood, and so "we need to send a strong message."

Centric, the Hotel Vitale, and the Sir Francis Drake Hotel did not respond to requests for comment as of press time.

"As a Teamster, I want to say on a personal note that my union would not be as strong as it is today if not for the LGBTQ community, going back to Alan Baird and Harvey Milk," Gonzalez said.

Gay District 8 Supervisor Rafael Mandelman, who walked the picket line, also paid homage to the Baird-Milk partnership, telling the crowd about the rally (https://www.ebar.com/news/latest_news//306400) that took place for Baird in the Castro neighborhood during Pride weekend.

Allan Baird, 89, is a straight ally and lifelong neighborhood resident who was instrumental to the cause of queer equality in unions. In 1973, Baird took charge of a union strike against Bay Area distributors, including the Coors Brewing Company. Baird reached out to his neighbor, gay future supervisor Milk, to build a coalition. Coors also had a 178-question employment application form.

"San Francisco is a fucking union town," Mandelman said to the applause of the crowd and the honking of passers-by.

Speaking to the B.A.R. before it was known Centric would be out as a contractor, Mandelman said he was at the event because "there's a contractor using non-union subs, exploiting workers and — on top of it all — is homophobic, right here in San Francisco."

Gonzalez had told Mandelman it'd be up to LGBTQ leaders, such as himself, to decide how Centric can make things right with the queer community. When the B.A.R. asked Mandelman what he'd do, he said "it's not for me to say. I don't think you can separate the LGBTQ community from the labor community."

David Campos, a gay longtime San Francisco politico who is currently chief of staff for District Attorney Chesa Boudin, followed up by telling the crowd that "we're here because the fact is not only is San Francisco a labor town, but it's also a town that has embraced diversity."

"I speak this as a queer man of color — I'm excited to see everyone here ... [since the legalization of same-sex marriage] people believe that being queer, being gay, being LGBTQ is no longer an issue, but this is why we're here," said Campos, a former supervisor who's running for the state Assembly seat soon to be vacated by David Chiu (D-San Francisco), who will become the city's new city attorney.

Campos' boss was also on-site. Boudin told the B.A.R. that "we've not received any information that a criminal act occurred here, but we are open to investigating. In cases such as this we usually wait for the San Francisco Police Department to be the investigating agency."

"I think it's shameful when non-union contractors are not paid prevailing wages and are treated with disrespect," Haney said. "There are laws in this city about wages that everyone has to abide by."

Honey Mahogany, a trans nonbinary queer person who works as a legislative aide for Haney, and who succeeded Campos as chair of the San Francisco Democratic Party, also spoke at the protest.

"I was very upset when I got the call from Rudy and how people were hurling homophobic slurs and I thought 'not in my fucking town,'" Mahogany, a San Francisco native, said. "Let's not forget — queers, queer women, queer men, trans people — have been part of the labor movement since the early 19th century. We stand together."