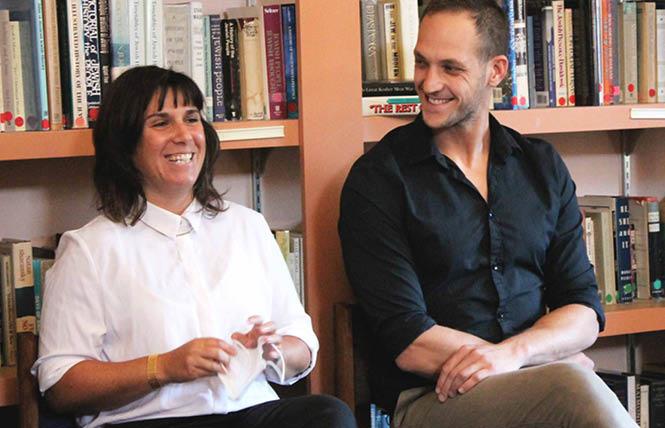 Two leaders from Israel's largest LGBTQ youth organization were thrilled to be in San Francisco recently, but not necessarily because of the history of slain supervisor Harvey Milk, the Castro neighborhood, or rainbow crosswalks.

They were excited to be in the City by the Bay because it was the site of the founding of the very first LGBTQ youth organization, Vanguard, in 1965.

Vanguard was short-lived, ending in 1967, but its messages fostering LGBTQ education and pride, fighting for equality, and the need for safe spaces dedicated to queer youth lives on today.

"We're inspired a lot from Vanguard, the first union of queer youth," Ofer Neumann, CEO of Israel Gay Youth, told the Bay Area Reporter. "We fight for people to be who they are if they are LGBTQ or other identities."

That's why Neumann and Liana Merom Asif, who is vice president of resource development and external relations, named their two new programs — an LGBTQ college and leadership center and a pre-military academy — after two historic leaders. The college and leadership center is named after the late lesbian Israeli politician Marcia Freedman and U.S. trans pioneer Marsha P. Johnson (see related story). The pre-military academy is named after the late U.S. Supreme Court Justice Ruth Bader Ginsburg, an ally who voted in favor of many of the court's LGBTQ decisions.

IGY will celebrate its 20th anniversary in 2022. Since its founding in 2002, the organization has grown from being a safe gather space for queer youth ages 12-23 to empowering 4,000 Israeli youth and young adults it serves across the country. The $3.5 million organization's seven-member staff, including Neumann and Asif, and around 450 volunteers operate 120 groups and 17 drop-in centers throughout Israel. The center works with various ethnicities and religious groups, such as Ultra-Orthodox Jewish communities.

The organization's goal is to be widely present.

"To be here and everywhere in Israeli society is a big statement because you are in the Orthodox families, also you are inside Muslim communities," Asif said.

Neumann, a 33-year-old gay man, and Asif, a 36-year-old lesbian, are on a 14-day tour of the United States. The pair started in San Francisco September 28. The queer Jewish leaders will touch down in Los Angeles and Washington, D.C., and end their journey in New York October 11, which is National Coming Out Day.

The B.A.R. met with Neumann and Asif before they spoke to a group of 15 Jewish LGBTQ leaders and allies at Congregation Sha'ar Zahav in the Mission neighborhood October 1. The livestream of the event attracted 37 people, said Matan Zamir, a gay man who is deputy consul general at the Israeli Consulate of the Pacific Northwest in San Francisco.

IGY is one of the first delegations sponsored by the Israeli consulate since the beginning of the COVID-19 pandemic, Zamir said.

"I am excited," he told the B.A.R. "We've been wanting to host delegations like IGY, like this one, for a long time."

A long way to go
Israel's LGBTQ youth and community overall have a long way to go to reach equality in the Middle Eastern country, the leaders said, describing the challenges they face and the successes they achieved over two decades.

Despite its success, even today IGY is not welcome everywhere in Israel. Neumann recalled reaching out to Yavne, a city in central Israel, where he knew the mayor and others, to establish a presence for IGY.

During the livestream event, he quoted the response he received from the mayor: "The gathering of the youth according to their identities is not to my liking and I do not approve."

"I was shocked," Neumann said. "I think that this story aligns with the struggles that we still have to fight. We are still not here and everywhere. We still have a lot of dark shadowed places that we have to enter with our ... very intensive wishes."

One of the most "important challenges" the organization faces is when it enters "very conservative parts of Israeli society and creates a different discourse or a new understanding of what does it mean to be LGBTQ," and how to "create secure independent lives that are not involving humiliation and violence," Neumann told the B.A.R. earlier in the day.

LGBTQ youth homelessness, depression, and suicide are all very real challenges for the organization, even before the global pandemic, but even more so due to COVID-19, Neumann and Asif said.

Neumann estimated that around "40% of the homelessness" in Israel are LGBTQ youth, which is similar to figures in San Francisco. He recalled recently helping a 19-year-old Haredi lesbian who was kicked out of her home.

By the time she called him, she slept for two nights in the Ezrat Nashim, the women's section of the Orthodox synagogue, she told him.

Haredi is a sect of Orthodox Judaism that strictly adheres to Jewish law, halakha.

Neumann said he asked, "How?"

He recounted what she told him, "When they came to wake me up, I told them I'm praying."

"Maybe this is the real work of God hosting someone who just got kicked out of their home, but I don't think that he really means it," Neumann told the livestream audience.

Neumann found a temporary space at two different shelters for the girl to stay. The organization's social workers worked with the family to allow her to return home.

Neumann and Asif are keenly aware of the pandemic's impact on IGY's community.

"A lot of times home could be either a shelter or a prison for our youth," Neumann said. "For us, it was super, super important to go on Zoom very quickly. We have to be inside those shelters or 'prisons' and helping them navigate between those situations."

During the pandemic, IGY's WhatsApp helpline experienced a 27% increase in calls and messages where youth expressed depression to suicidal thoughts, Asif said.

IGY quickly pivoted, doubling down on its virtual programs already in place and expanding access to Zoom and WhatsApp to get around access issues for youth who did not have their own computers or lacked space for privacy during quarantine, the two said.

Coming to San Francisco, Neumann and Asif said they were impressed by how being LGBTQ is so open, from rainbow flags flying in some San Francisco school classrooms to the existence of an LGBTQ synagogue, Congregation Sha'ar Zahav.

"I can just imagine what would happen to queer students that their principal would hang, without saying anything, a queer flag," said Asif. "It would change a lot and it is also very inspiring."

"To imagine an LGBT synagogue in Israel is like we are very far from it," Asif said. "We are also struggling about the connection between Jewish identity and LGBT identity."

Neumann summed up the situation, "We still have a very long way to go to where we want to be as a queer community."

On its way
IGY is well on its way to accomplishing equality in Israel helping the country's queer leaders of tomorrow. Neumann and Asif explained to the audience how the organization partners with government ministries and organizations across the country.

The two work off each other's strengths. Neumann worked in the Knesset, Israel's parliament, for eight years, where he served as a senior adviser to Israel's new President Isaac Herzog and chief of staff to MK Stav Shaffir. He started volunteering at IGY when he was 22 years old, he said. Asif has a background in education and a career working with youth.

Three years ago, the organization started working in schools through the Ministry of Welfare and Social Affairs. Recognizing the challenges, such as economic hardship and language barriers, that queer youth face going to college, Neumann and Asif launched the college and leadership center.

The goal is to "get them to study, to have a profession, to have the ability to enter the workforce in Israel in a more equal way. Otherwise, we end up seeing them in the streets," Neumann said. "They should be in the Israeli workforce."

LGBTQ people have served openly in the Israeli Defense Forces since 1993. Serving in the IDF is mandatory for Israelis over the age of 18. However, the military remains a bastion of machismo and Asif said, "It can be hard. It could be very harmful."

The academy's goal is to prepare queer youth for entering that environment, Asif said. The academy provides the "ability of the LGBTQ community to join as equals to the effort to defend Israel," Neumann added.

A longer-term project for the academy is IGY working with commanders and the army staff to sensitize them to what it means to be LGBTQ, they said.

"They understand the need to have connections and partnerships and they are very successful in getting them," said Leslie Kane, an ally lay leader of the regional council at the New Israel Fund, which co-sponsored the event.

She was impressed by the leaders' "desire and the success" working beyond LGBTQ organizations across civil society, foundations, and government to achieve their goals.

"I think the role of the queer community is to create a better society," said Asif. "In the end, it is not only to make a safe space for LGBT but we create an equal and a democratic state for all."

The event was also co-sponsored by Sha'ar Zahav, A Wider Bridge, the Jewish Community Relations Council, and the National Council of Jewish Women.