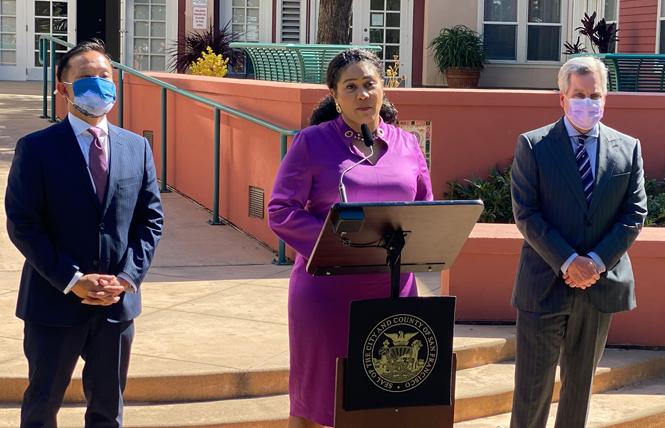 Assemblyman David Chiu (D-San Francisco) will become San Francisco's next city attorney, as had been widely expected for months. It will result in a hotly contested special election for his legislative seat within 140 days from when he officially resigns from the state Legislature.

Mayor London Breed announced the appointment of Chiu Wednesday, less than 24 hours after the San Francisco Public Utilities Commission approved City Attorney Dennis Herrera's contract to serve as the new SFPUC general manager. Breed had tapped him for the post in the spring, setting off the speculation that she would name Chiu as Herrera's successor.

"I am deeply grateful and humbled by the opportunity to serve as San Francisco's next city attorney," Chiu stated in a news release from the mayor's office. "Throughout my legal career and in public service, I have seen the real impact of the law on everyday people. It will be an honor to be able to use the power of the law to fight for justice on behalf of the people of San Francisco in this new capacity."

Now begins a series of political musical chairs that will alter the city's elected official roster in the coming months. Governor Gavin Newsom must now call a special election to fill Chiu's Eastside Assembly seat, likely before March 21, through the rest of his term ending in early December 2022.

Chiu, a former San Francisco supervisor, will also have to run next year to serve out the remainder of Herrera's term through 2023. At a Wednesday morning news conference with Breed at Juan Pifarré Plaza, Chiu thanked Herrera for his years of service leading the city attorney's office.

"I want to salute my friend — our current city attorney — Dennis Herrera, who has set the high standard for public law offices in this city," Chiu said. "Our city owes Dennis Herrera an enormous debt of gratitude."

Chiu spoke of how he is the son of Chinese immigrant parents. He grew up in Boston and later graduated law school at Harvard. He is set to become the first Asian American city attorney of San Francisco.

Breed stated that Chiu has long worked to improve the lives of San Franciscans.

"He has the vision, integrity, and experience, and I know he will continue to fight for the people in our community who are most in need," the mayor stated. "I know that he will bring that same approach to this new role and I am confident that the City Attorney's office will be in good hands for years to come."

Herrera praised the selection of Chiu to succeed him in the role and indicated his faith in him continuing to look into various corruption allegations that have ensnared a number of top city department heads and other employees in recent years.

"I'm pleased to be able to leave this office in the hands of David Chiu, someone who is committed to the mission, values, and integrity that have made the San Francisco City Attorney's office so remarkable for so long. I've known David for years. He is a person of principle and integrity. He is committed to transparency and clean government. And he is independent. He is going to be a great city attorney."

In June, the SFPUC Commission officially recommended Herrera to serve as the agency's next general manager. With the ratification of his contract September 28 by the commission, Herrera will officially begin his new post November 1. According to the commission's agenda, it voted on a $395,000 contract for Herrera, as the B.A.R. reported in an online story Tuesday.

"With the commission approving Dennis Herrera's contract, I am glad we can now move forward with a new era for the SFPUC," Breed stated. "Dennis's long track record of integrity and ethical leadership, as well as his experience leading on issues from civil rights to environmental protection to renewable energy, has demonstrated the type of leadership he will bring to this new role."

"I can't wait to roll up my sleeves and get to work for all of the SFPUC's ratepayers," Herrera stated. "It's an honor to have this unique opportunity to face the challenges of our time as the general manager of the SFPUC."