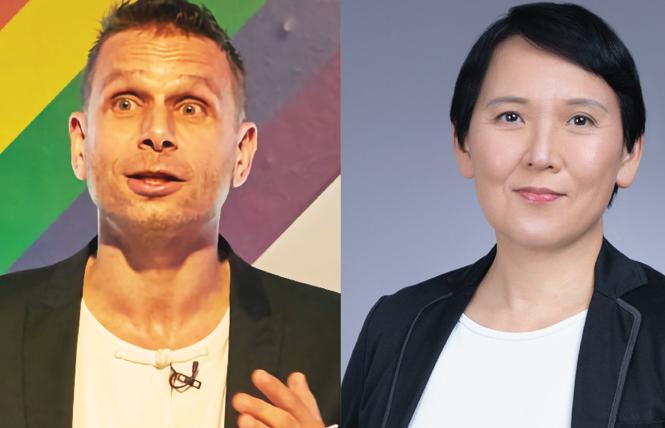 The decision last week by organizers of Gay Games XI in Hong Kong to postpone the event for one year until November 2023 seemingly materialized at the last moment without warning.

In reality, it was a calculated decision months in the making — an option to adjust to uncertain, ever-changing realities; and to regroup in a more stable time with a revised operational plan strengthened by lessons learned.

Gay Games Hong Kong announced September 14 it was postponing Gay Games XI, which were scheduled to be held in November 2022, because of the impact of COVID-19 pandemic-related precautions, such as vaccination requirements and travel quarantines. (See September 16 Jock Talk, "2022 Gay Games postponed due to COVID pandemic.") The system that led to that decision had been set in place almost two years earlier before anyone had even heard of COVID-19.

At the October 2019 Federation of Gay Games annual meeting in Mexico, delegates of member organizations expressed concerns about the viability of holding the event in Hong Kong because of increasingly repressive control by the mainland Chinese government. There were calls for the FGG to develop a "Plan B" and not to delay long in making a decision about whether to move, cancel, or postpone the multisport event.

On a virtual meeting call Saturday, September 18, for Gay Games supporters with questions about the postponement, GGHK co-chair Dennis Philipse said the host organization and the FGG board had formed a working group to evaluate the evolving situation on a monthly basis shortly after the 2019 membership meeting. The group also enlisted Control Risks, a global consulting company, for its discussions.

Over the ensuing two years after the working group was formed, the Hong Kong demonstrations quelled, but mainland control and government restrictions increased. The pandemic hit, causing deaths and disruptions in everyday life globally. Sports events and seasons were canceled or postponed. Local recreational clubs that form the backbone of the Gay Games movement had to suspend most of their training.

In 2020, the viability working group decided to postpone full registration a year. Another year passed and, with no sign of the pandemic letting up, pre-registration was launched instead, allowing athletes to pay a nominal fee to express interest, reserve a spot, and eventually receive a discount when registration fully opened.

As the Delta variant keyed new surges in COVID-19 cases and deaths globally in the middle of this year, the working group focused more closely on options to pursue if things did not appear to be getting better. Philipse said organizers wanted to make a decision as soon as possible in order to give potential participants and their clubs time to make alternative training and competition plans.

About two weeks before the announcement of the postponement, the working group was considering options that included holding a scaled down event that would be sorely deficient in global participation; holding a "virtual" Gay Games with satellite events around the globe; or postponing the event.

"We all realized the other options would not be good and probably create massive negative reaction," Philipse said. The idea of a scaled-down, less global event "doesn't meet our purposes," he said.

On the participant side, currently the biggest obstacle the pandemic presents globally is that athletes are having trouble training in their particular disciplines because of social distancing and masking and vaccination requirements. On the host side, Hong Kong has the most restrictive travel quarantine restrictions in the world. Its health ministry is pursuing a "zero-COVID" strategy that focuses on preventing cases from reaching its shores. That means it is almost impossible for large numbers of athletes and artists to travel to Hong Kong without having to quarantine and thus have no training access for two or three weeks before competing.

Philipse said registration will open "when people are able to book a flight into Hong Kong. We're hoping that is mid-year 2022."

FGG co-president Sean Fitzgerald said once the working group decided to postpone the Gay Games, things moved quickly. He said the FGG board was told of the postponement decision immediately and voted unanimously over the weekend to agree to the time extension. A proposal was sent to Hong Kong for approval September 12, returned to the FGG board for approval on September 13, and the announcement made the next day.

That announcement has sports federations trying to make plans to fill the competition void in 2022.

Take International Gay and Lesbian Aquatics, which is represented at the Gay Games with the sports of diving, swimming, synchronized swimming, and water polo. The last annual IGLA championship was in February 2020 in Melbourne. The 2021 championships in Salt Lake City were canceled because of the pandemic. The next major global gathering of IGLA members would have been in 2022 in Hong Kong.

IGLA membership had been scheduled to hold a virtual meeting at the end of this week to select a host for the 2023 championship. The postponement throws a monkey wrench into those plans. IGLA treasurer Chandler Mercer told the Bay Area Reporter the meeting has been postponed to Saturday, October 16, to discuss and decide on what to do for 2022 and 2023.

"We are exploring options," Mercer said. "We would like to put something together for 2022. COVID makes all of this murky. We are standing behind the Gay Games."

Some lessons learned
The FGG and GGHK both said they are scrambling as well to deal with the altered conditions.

Lisa Lam, co-chair of GGHK, said organizers were rethinking a lot of their business decisions. One of the concerns many sports leaders expressed was that policies in Hong Kong make it difficult to secure government-controlled venues more than a few months in advance of a scheduled event. That means participants would have been asked to register before they even had a venue secured in which to operate. Requests to change procedures to allow for the Gay Games to secure venues sooner had met with minor but vocal opposition in the government.

"Some time was lost focusing on getting government venues," Lam said. "We have shifted to looking at universities and private parties for venues. This is a lesson learned for us."

Philipse said organizers were reworking budgets, financial plans, and marketing proposals to be presented when GGHK reports to FGG members at the general assembly in November. He noted that COVID had prevented Hong Kong from making many in-person presentations because of sports events that were canceled over the past year and that next year might be better for that.

FGG organizations at the meeting will select a host for Gay Games XII among bids from Guadalajara, Mexico; Munich, Germany; and Valencia, Spain. All three bidders are scheduled to make in-person presentations, but Guadalajara has requested that all presentations be made remotely since it does not appear travel restrictions will allow its representatives to travel to Europe for the meeting. The FGG is expected to make its decision remotely but seriously: if your mission is to be inclusive, you're going to Asia this go round because you want to expand beyond your historic Western Europe-United States axis, and you are going to have a significant number of your members hearing the presentations and voting remotely anyway, how can you not level the playing field for your bidders?

Fitzgerald said effects of having the next two Gay Games just three years apart would increase the likelihood of more multi-year sponsors but would also mean two steering committees between hosts and the FGG would be operating simultaneously at full speed for two years, and there would be less time to revise the operational Red Books (provides standards to be met for each sport regarding venue requirements, rules, etc.) for each sport between Gay Games XI and Gay Games XII.

Jock Talk: Out athletes score at Tokyo Olympics
Sign up!