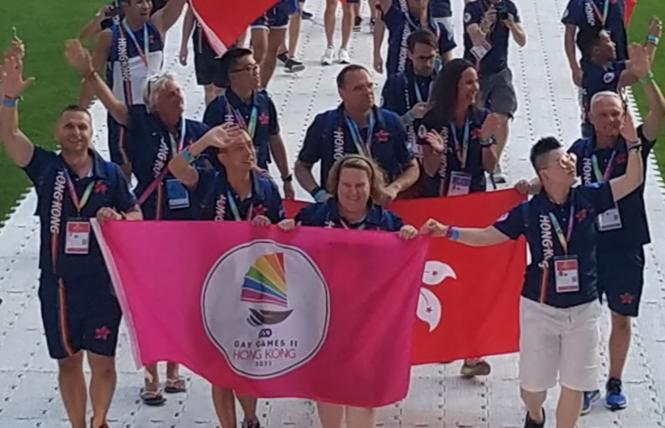 Gay Games XI is scheduled to be held in Hong Kong November 11-19, 2022. That's less than 15 months away. Normally this far out from a Gay Games, registration has already been open a year or more; and clubs are universally abuzz with fundraising, training, and planning efforts. Alas, the here-and-now is anything but normal same-old-same-old. Unique COVID-19 pandemic and political events have made this Gay Games quadrennial cycle unlike any before it.

The past several weeks, I have talked informally with Gay Games athletes and supportive sports organizations about the Hong Kong Gay Games and the levels of excitement, preparation, and concern they have encountered with their clubs and fellow athletes.

Almost universally they have expressed respect and admiration for the Hong Kong volunteers working to organize the Gay Games under challenging circumstances. They applaud the effort to expand the reach of the Gay Games mission into Asia by hosting the event there for the first time. Most say they were initially excited about the chance to compete in Hong Kong.

But an overwhelming majority in most of the sports has also expressed potentially deal-breaking concerns. Many personally do not expect to go. Many say they plan to go as a show of support and a chance to be part of history, but they do not expect fellow club members to go in significant numbers. Most of them appear focused on the selection of a host city for 2026 — the Federation of Gay Games membership will select from among Guadalajara, Mexico; Munich, Germany; and Valencia, Spain at its annual meeting this November in Brighton, United Kingdom — with fingers crossed that a smaller, more regionally focused Hong Kong Gay Games are a success.

Most of their voiced concerns boil down to two basic issues: COVID and communism. In other words, can the Gay Games be held at that time, and should they be held in that location?

The political climate
Let's talk about the latter question first.

The pandemic was not a factor when Hong Kong was selected in 2017. It had not even started to make headlines two years later when the FGG met in Guadalajara. At that 2019 meeting, Hong Kong had been plagued for almost a year by street demonstrations and protests resulting in disruption of services and often-violent confrontations with police. The protests were in response to a proposed law that would expose Hong Kong residents to extradition to the mainland, where they would be at the mercy of the communist-controlled court system; as well as the government's continued failure to allow open democratic elections.

Neither Gay Games organizers nor Gay Games supporters believed the protests would still be occurring three years later when the event was held; the protests themselves were a non-issue. But supporters were concerned about the growing authoritarian control of the communist mainland government over "semi-autonomous" Hong Kong, which they did not believe would end with the protests.

Since then, those concerns have proved correct and accelerated. As the pandemic raged across the globe and helped tamp down the demonstrations, a new national security law was imposed on Hong Kong by the mainland government that outlawed demonstrations and speech that the mainland government considered contrary to its interests — specifically its dominion over Hong Kong. Since then, security agents from the mainland have set up operations in the city. Hundreds of protesters have been arrested and denied bail under the new law. Pro-democracy candidates have been disqualified from running for office.

The anthem "Glory to Hong Kong" has been banned in schools. Nineteen legislators have either been expelled or resigned in protest. Officials of independent Taiwan working in Hong Kong have been told they must sign statements accepting China's claim to Taiwan or not have their visas renewed. Journalists have been arrested.

Police have targeted individuals wearing black T-shirts or yellow face masks, colors associated with the pro-democracy movement. This month the Professional Teachers' Union and the Civil Human Rights Front both disbanded. Many people have shuttered their social media accounts, worried about retroactive retribution.

A question posted on International Front Runners' Facebook page August 18 asked if many runners would be going to the Hong Kong Gay Games. The question drew 25 answers before the comments were shut down on August 20. Several runners said they and members of their clubs planned to go and were excited about the opportunity. Others wrote comments such as "I would have loved to but the crackdown by China specifically on Hong Kong is chilling," "I am not willing to travel to China," and "I just don't feel comfortable holding the Gay Games in a place run by an authoritarian government."

Objections to holding sports events in locales making headlines for the suppression of human rights is nothing new. The NBA withdrew for a time its All-Star Game from North Carolina because of the passage of an anti-transgender law, international soccer faced criticism for awarding its World Cups to Russia and Qatar, and calls for boycotting the 2022 Winter Olympics in China have already begun.

Dueling op-ed pieces on lgbtqnation.com have appeared in recent weeks supporting and opposing the Gay Games in Hong Kong. On July 16, Adam Nelson of the National Democratic Institute wrote, "There can be no Pride in a police state. The Gay Games are not just another sporting event. The Gay Games federation bylaws explain its mission as 'to promote equality through the organization of the premiere international LGBTQ+ and gay-friendly sports and cultural event known as the Gay Games.' How does that square with holding the games in a city where LGBTQ activists and others sit in prison for speaking up? How are the Gay Games promoting 'equality' by drawing athletes to an authoritarian state that actively persecutes its citizens?"

Nelson continued: "The issue facing the Gay Games is not just one of principle — LGBTQ athletes and others attending the games are at risk. The new national security law allows authorities to prosecute anyone — including foreigners — for offenses committed overseas, including what they say on social media. If athletes voice opinions authorities find objectionable, they can be arrested upon arrival in Hong Kong. Or prevented from leaving. So much for 'equality.'"

Nelson concluded by calling for the FGG, rather unrealistically, to relocate the Gay Games to another city in Asia, suggesting Taipei, Seoul, or Sydney. Of course, Sydney is in Australia, not Asia; and Taipei is in Taiwan and that would spark an entirely different confrontation with China.

(Taiwan Gay Sports and Movement Association has already said that since under the security law it would be a legal offense for it to carry the Taiwanese flag in the opening ceremonies, it will not send a team to celebrate, although it will support individuals if they choose to go.)

John P. Burns, a professor emeritus with the University of Hong Kong, wrote a rebuttal August 3 in the same publication. He wrote: "I am no defender of our government, but Nelson's over-the-top characterization of life in Hong Kong is absurd. We still have access to the internet, relatively free media especially online, church-run schools that confront the state, and a relatively independent judiciary. Hong Kong is ripe for reform, and the games have the potential to change social attitudes."

The pandemic
COVID creates graver logistical problems not just for organizers but for sports groups across the globe for multiple reasons.

"Unfortunately, due to the worldwide pandemic gripping all of us once again, it is very hard for our track club members to plan anything concrete at this time," said Norma Lopez, president of San Francisco Track and Field Club. "I do know that some track athletes have already signed up to participate and a majority are waiting until the beginning of the year to make final plans especially, with the ever changing pandemic protocols and restrictions. On a positive note, we are very excited to have the opportunity to attend the first ever Gay Games being held in Asia and also of meeting a mélange of new Asian athletes."

Lopez said the club is trying to sort out season competition plans while accommodating the scheduled start of the Gay Games.

"Since the Gay Games will be held November 11-22, the most important thing we are currently trying to figure out as a team is what our track season will look like in 2022, as we typically start formal track practices in February," she said. "We would normally want our performances to peak at Gay Games, but with the November dates, it makes for an awfully long track season that can have potential physical harm to our athletes due to the length of grueling work-outs. I am sorry that I can't give you more information of how we are preparing for Gay Games XI, as we too, are trying to figure things out with the looming pandemic still in the forefront of our minds."

The unpredictability of pandemic travel deterrents, economic repercussions, and social interaction restraints have made sports training, travel planning, and fundraising almost impossible for most clubs and individuals. Golden Gate Wrestling Club, for example, has not had access to its mats housed at Eureka Valley Recreation Center since the start of the pandemic and has not had any place to train. A large proportion of Gay Games wrestlers historically have been relative novices to competition wrestling. If they cannot get sufficient mat time, it is not safe for them to wrestle.

This isn't the Olympics. These are not elite athletes who have the organized financial and logistical support of their national federations to arrange training, housing and travel "bubbles." These are recreational athletes who have to hold down jobs and build up their savings and train when chance offers and definitely do not have the money to handle lengthy quarantine hotel stays.

A chart explaining current travel restrictions for travel to Hong Kong was published on social media this month. The chart indicates that depending on the location travelers are coming from, they may have to be hotel quarantined from anywhere from seven to 21 days — and that's if they are vaccinated. If they do not have a vaccine accepted by Hong Kong authorities, they may have to be quarantined for 21 days or denied entry entirely.

That's one to three weeks in isolation with no training opportunity right before competition. Tourism and sightseeing have always been part of the appeal of Gay Games participation. Quarantine replaces that with television binge-watching.

After the decision was made to postpone the scheduled 2020 opening of registration, organizers launched pre-registration this year on April 12, requiring participants to put down only a nominal non-refundable fee that would apply to a larger discount for final registration. That produced an initial surge, with more than 825 people signing up the first seven weeks, a rate of about 118 people per week. But that pace tapered off. In the subsequent 10 weeks, the rate was about 63 people per week. As of August 13, the total sat at just over 1,450.

HK2022 had optimistically projected 15,000 participants — a standard never achieved by the Gay Games even in the best of times. It is hard now to see that projection being met. Then again, a Gay Games has never been measured by the size of its registration but by its impact on the lives of its participants and those who support them.

In the end, the biggest hurdle for the 2022 Gay Games may be one of timing. These are global times unlike any other host ever faced. Likely they will produce a Gay Games unlike any other. In the face of adversity and skeptics, it may be a regionally focused, scaled down event of symbolism, unity, hope, and healing — and better days to come.