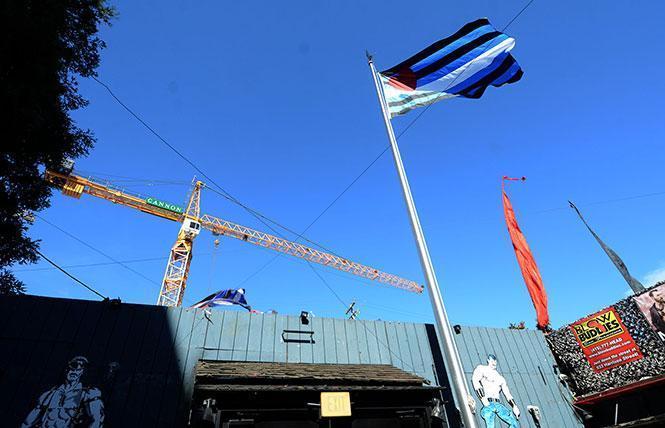 The leather pride flag flew outside the Eagle Bar in 2018 as construction continued on a mixed-use development that will pay for a leather-themed public plaza nearby. Photo: Rick Gerharter

San Francisco planning staff has deemed the South of Market Eagle bar worthy of being designated the first city landmark related to the leather and LGBTQ communities. In a report released ahead of a hearing before the city's Historic Preservation Commission, the planners noted the gay-owned venue at 396-398 12th Street is one of the longest operating LGBTQ bars in the city.

In recommending that the historic preservation advisory body support landmark designation for the Eagle bar, the planning department noted that from when it opened in 1981 until its temporary closure in 2020 due to the COVID pandemic, the venue "has served as a cornerstone for San Francisco's South of Market (SoMa) Leather and LGBTQ communities."

It also noted, "the Eagle is the longest operating extant SoMa Leather/LGBTQ space, even pre-dating most of the Castro's LGBTQ bars."

The Board of Supervisors in February approved the landmarking process for the roughly 5,153 square foot, irregularly-shaped rectangular lot at the corner of 12th and Harrison streets. The Historic Preservation Commission is expected to endorse making the Eagle bar a city landmark when it meets Wednesday, May 19.

It will then be sent to the supervisors' land use and transportation committee for a hearing. Afterward, the full board would need to vote two times in support of the landmark before sending it to Mayor London Breed for final approval. It would become official 30 days after Breed signs the landmark designation ordinance.

Haney instigated landmarking
As the Bay Area Reporter has previously reported, District 6 Supervisor Matt Haney instigated the landmark process for the Eagle late last year after the property was put up for sale. It has yet to sell, and as indicated in the planning landmark report, questions remain on who owns the corner parcel at the intersection of 12th and Harrison streets.

Staff also noted they emailed Nikitopoulos in late April about the upcoming hearing. Yet the packet includes no response from either Oglesby or Nikitopoulos.

A number of the Eagle's patrons and several LGBTQ community groups did send in letters in support of designating the bar a city landmark. Should it be approved, it would be the sixth location in the city designated a local landmark solely for its ties to LGBTQ history and the first to be located in SOMA.

"The SF Eagle is the cornerstone and most important physical representation of the San Francisco LGBTQ/Leather community and provides an essential safe space for individuals in that community," wrote Alex Ray, a city resident since 1992. "We meet there to acknowledge and show respect for our cultural traditions and help carry them into the future; to celebrate our hard-fought civil rights victories; to commiserate our political defeats and mourn our dead; to provide loving emotional and spiritual support for one another; to raise much-needed funds for the various nonprofit organizations that provide an essential lifeline to our most vulnerable community members; and so much more."

As cited in the planning report, the B.A.R. in 1980 broke the news about an Eagle bar opening in San Francisco, as similarly named bars were already operating in New York, Boston, Los Angeles, and Washington, D.C. The SOMA location opened April 8, 1981 under the ownership of Bob Damron, author of the Damron Gay Guide, and business partner Jay Levine.

In 1998 ownership of the Eagle transferred to partners John Gardiner and Joe Banks, the proprietors of the nearby Hole in the Wall Saloon. They ran it until May 31, 2011, when the bar closed for a couple of years.

Montiel and his late friend and business partner Mike Leon reopened the Eagle in 2013. It remains closed due to the health crisis, though Montiel does plan to reopen it and revive its beloved Sunday beer busts/fundraisers on the outdoor patio.

It is one of the few SOMA leather bars to have such a space where it can hold events and gatherings. At nearly 1,400 square feet, the patio is believed to be one of the largest outdoor patios in city, according to the planning report.

The bar has lent its name to the newly built Eagle Plaza public parklet on a portion of 12th Street that honors the local leather, kink, and LGBTQ communities.

As the planning report notes, "The Eagle has demonstrated enormous resiliency as the venue has persevered through the AIDS epidemic, changes in ownership, and continued community displacement resulting from rapid development throughout the SoMa neighborhood. Many of the Eagle's recurring events which began in the 1980s and contribute to its significance have continued through contemporary times."

The Historic Preservation Commission meets at 12:30 p.m. May 19. For information on how to join the virtual meeting, and to download the full staff report about the Eagle Bar landmark, click here.

Party with the bears at Bearrison Street Fair
Sign up!