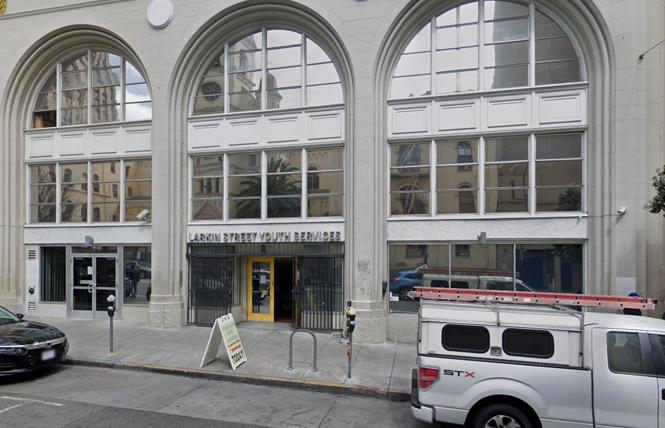 Larkin Street Youth Services is the defendant in three lawsuits, one alleging sexual coercion, one for breach of contract, and one for unpaid wages. Photo: Google Street View

Larkin Street Youth Services, which receives millions of dollars in public funding, is San Francisco's largest nonprofit provider for homeless youth, including LGBTQs. It is also the defendant in three recent civil complaints — including in a lawsuit that alleges an employee coerced three women who worked there into having sex.

The other two suits allege unpaid wages and breach of contract.

The three employees' lawsuit was filed in San Francisco County Superior Court April 22. It alleges that a man, who was an employee of Larkin at all the times referred to in the suit, coerced the three women into having sex with him, threatening "negative consequences if they did not submit to his advances," the complaint states.

Due to Larkin Street not returning multiple requests for comment, the B.A.R. was not able to ascertain the job title of the male employee and whether he still works there.

The complaint alleges that in November 2020, the man touched the breast of one woman.

"When she told him to stop he advised that if she wanted more hours she should have oral sex with him, otherwise the hours would go to someone else," the complaint states. "[The woman] did not submit to [the man] on that occasion, but was afraid to lose her job and had witnessed how two other female employees had been terminated after incidents involving [the man]."

"[The woman] resisted at first, telling [the man] she had a boyfriend, but fearing for her job after [the man] would not relent submitted to sex with [the man], without a condom at his insistence," the complaint states. The plaintiff also alleges in the lawsuit that she suffered health consequences as a result of the coerced sex.

The complaint states that the next month, a second woman was called into the man's office. When she took off her mask she was wearing due to COVID protocols, the man attempted to kiss her, the complaint states.

"[The woman] pushed [the man] away and asked why he was acting that way. [The man], who appeared inebriated, responded that [the woman] was beautiful, he wanted her to be his girlfriend, and that he was the reason [the woman] had not received more severe discipline during a previous incident," the complaint states.

The woman was subsequently threatened with termination, too, the complaint states, saying the man was "the only thing protecting her from being fired."

"She gave in but asked that he wear a condom," the complaint states. "He refused and had sex with [the woman] in the office while she cried due to pain and embarrassment."

Also that fall, a third woman was called into the man's office, the complaint states. She had been hired two months prior by the man and another supervisor, citing her history of substance abuse and mental health issues arising from childhood sexual abuse as a reason why she wanted to work at Larkin Street.

The man harassed her, the complaint states, until she relented after he stated "she was on probation and did not need a reason to let her go."

Subsequently, "[The man] called [the woman] into his office and had his penis out and demanded that she perform oral sex. [The woman] indicated she was not interested but due to [the man's] position of authority and [the woman's] previous abuse, she did as he asked and went back to work, humiliated and traumatized."

It did not end there, according to the complaint.

"[The man] coerced [the woman] to meet him at a hotel to have sex at which time he also smoked crack in front of her, causing [the woman] further trauma due to her recovery from substance use," the complaint states.

In February 2021, the man, another supervisor, and the woman had a meeting to "discuss rumors that [the man] had been acting inappropriately with female employees," the complaint states. The woman did not reveal the truth at that meeting because she was intimidated, the complaint states; however all three of the women quickly learned of each other's circumstances and complained to human resources.

However, according to the complaint, human resources told the man (or allowed the man to be told) of the complaints against him, and he continued his campaign of intimidation.

The two causes of action are that Larkin Street violated the Fair Employment and Housing Act through the "hostile work environment" the man created, and that Larkin Street retaliated against two of the women, leading to their constructive termination, by disclosing complaints to the man.

When reached for comment after the initial online publication of this story, Jay Jambeck — an attorney with San Francisco firm Leigh Law Group P.C., which is representing the women — stated that he has no comment except to confirm one of them still works for Larkin Street Youth Services. Jambeck said he would have to check with each plaintiff if they'd be comfortable with their names being disclosed in a news article. 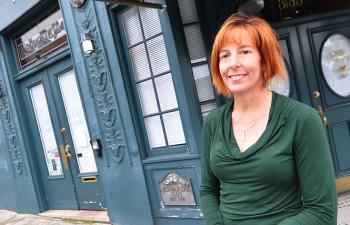 Sherilyn Adams, a lesbian and the longtime executive director of Larkin Street, did not return phone and email messages seeking comment. Alex Tourk, principal at Ground Floor Public Affairs, a local government and community outreach firm, wrote in an email that his firm represents Larkin Street. He stated the agency is unable to comment on active litigation.

"Despite further written demands from plaintiff to remit the remaining balance due, defendant neither paid any further sums nor responded to plaintiff," the complaint states.

Nathan D. Borris, a Hayward-based attorney representing Crusader Management Services, told the B.A.R. May 11 that the case has been scheduled for trial in February.

"It's still really early in the discovery phase," Borris said. "Other than the complaint on file, that's all we've got so far. Like any complaint, they're allegations at this stage."

Borris called it a "pretty simple case for services rendered and not fully paid."

"I don't have comment or knowledge of Larkin Street's business practices or anything like that," he said, adding that he learned earlier that day about the other two cases.

Jordan is seeking, "individually, and on behalf of other aggrieved employees," an amount above $25,000.

Edwin Aiwazian, a Glendale-based attorney representing Jordan, did not return a request for comment by press time.

Larkin spokesman Tourk stated that the agency could not comment on active litigation.

Updated, 5/12/21: This article has been updated with a response from Larkin Street.

Updated, 5/18/21: This article has been updated with comments from one of the plaintiff's attorneys.